Inside: The best games to play at your next beer olympics and the ultimate guide for how to host at home.

There’s really nothing like gathering a group of friends, a ton of beer, and bringing out everyone’s competitive sides!

Drinking games are America’s favorite pastime, besides football, of course. Nothing compares to the fun that you have when all of your friends get together for some good old fashion fun: Drinks and games. If you are itching to have an epic get-together but have no idea what to do, let me introduce you to your next good time: A beer Olympic games party.

I have gone to 2 of these parties in my lifetime, and they both have resulted in some of the most fun that I have ever had. Today, I am going to walk you through how to host a beer Olympics game.

I discuss everything you will need to know, from games to decorations to prizes. Though it isn’t the most complicated party, it does take some work to get it all together. My hope is that this guide will make the process easy and digestible for you; that way, you can have the most fun. You can enjoy everything from the planning process to the party process, so get to it!

These beer olympics ideas will help you get your party going. 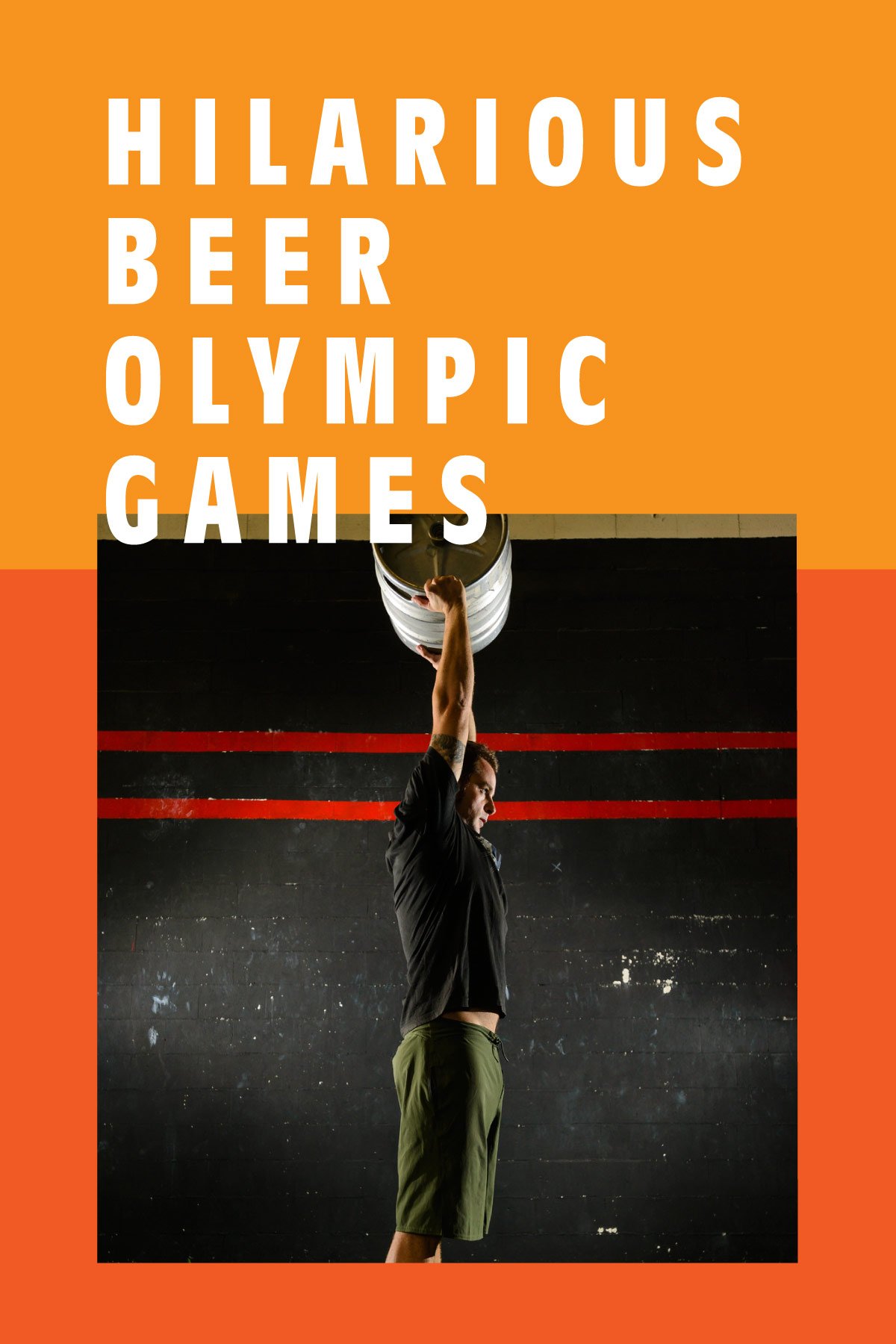 From classic beer games to some more intricate ones that may prove to be your new favorites; I can assure you that all of these will put a “hoppy” face on everyone involved.

However, while you’re having a blast, always remember to drink responsibility.

But first, I suppose I should go over what exactly a beer Olympics game is.

What Are Beer Olympic Games?

As the name may suggest, A beer Olympics Party is an epic-themed get-together where to whole night is geared toward drinking games. You get together a bunch of your friends or family(as long as they are over 21) and spend the night competing against each other in teams to see who will win the ‘Beer Olympics’.

If this sounds like something you would be interested in, I highly recommend it. It’s a great way to let off some steam and has a wonderful time with the people you love…getting sufficiently drunk. I never recommend throwing this party on a weekday.

So…let’s get into the fun stuff. I go over every question you may have about How to host a beer Olympics game. You don’t have to follow everything exactly as I put it, but this can be your foundation for your own party. 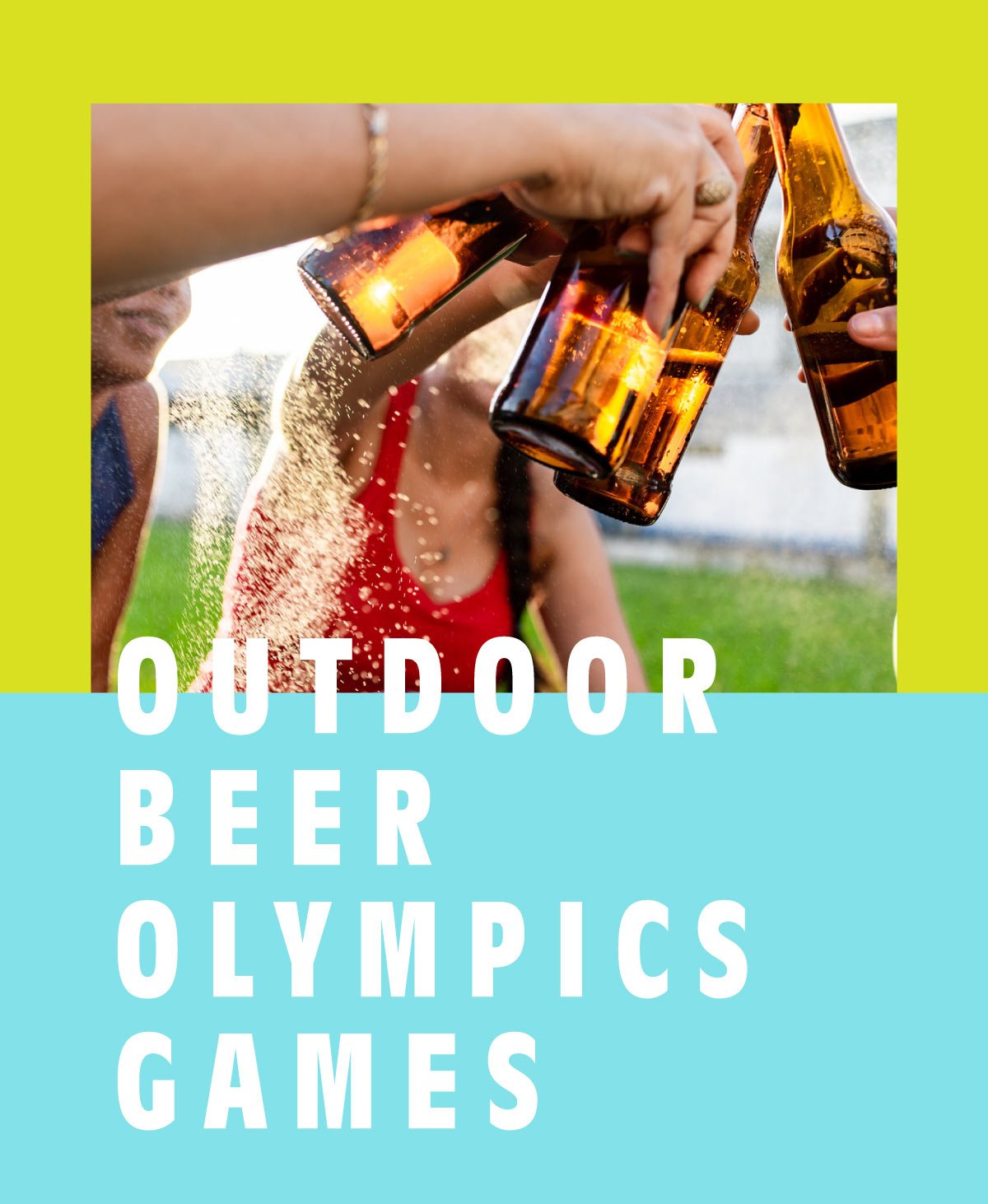 These games will be sure to get the party started!

These fun relays should definitely make it into your next beer olympic games. 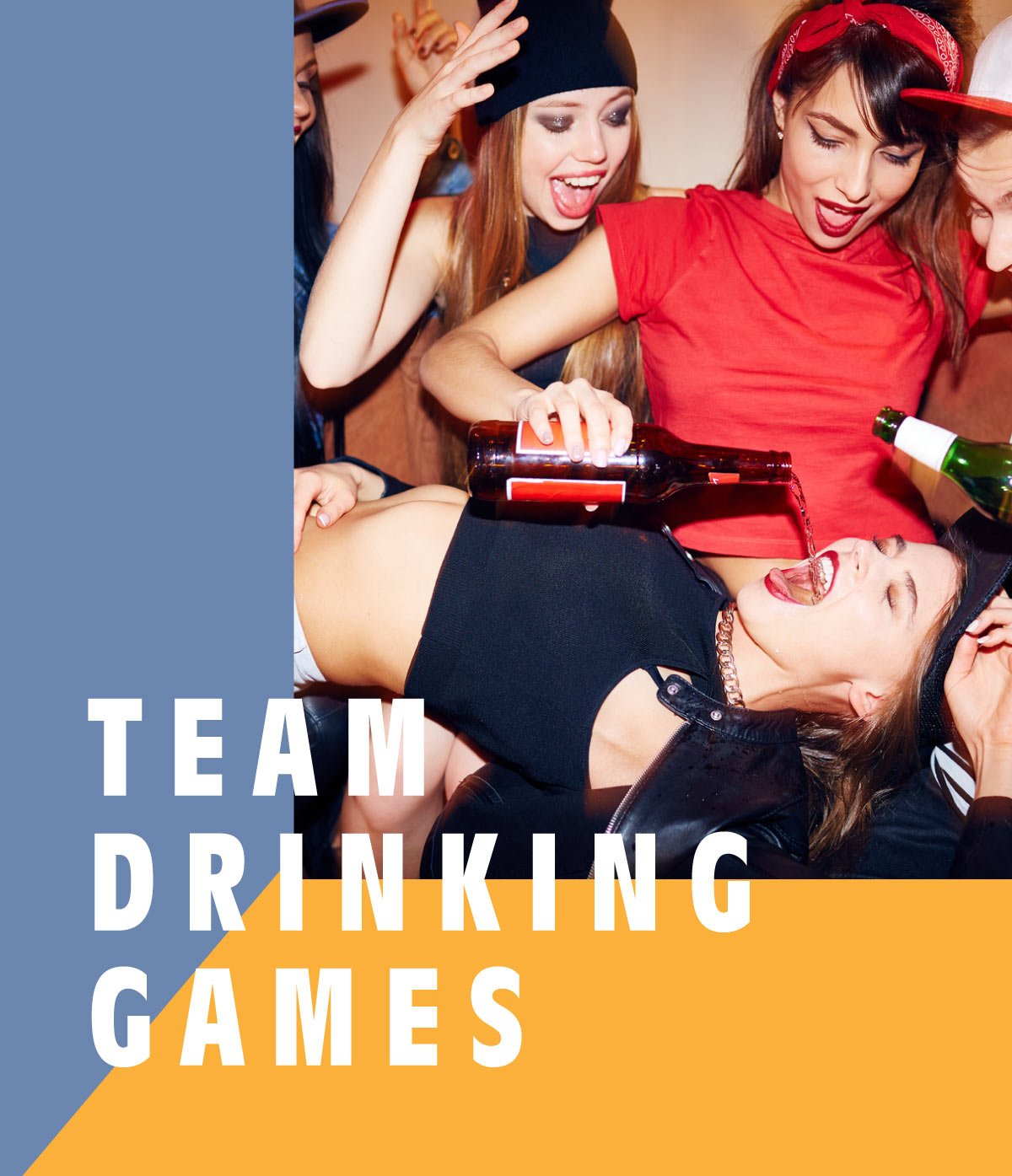 Get everyone involved with these team drinking games: 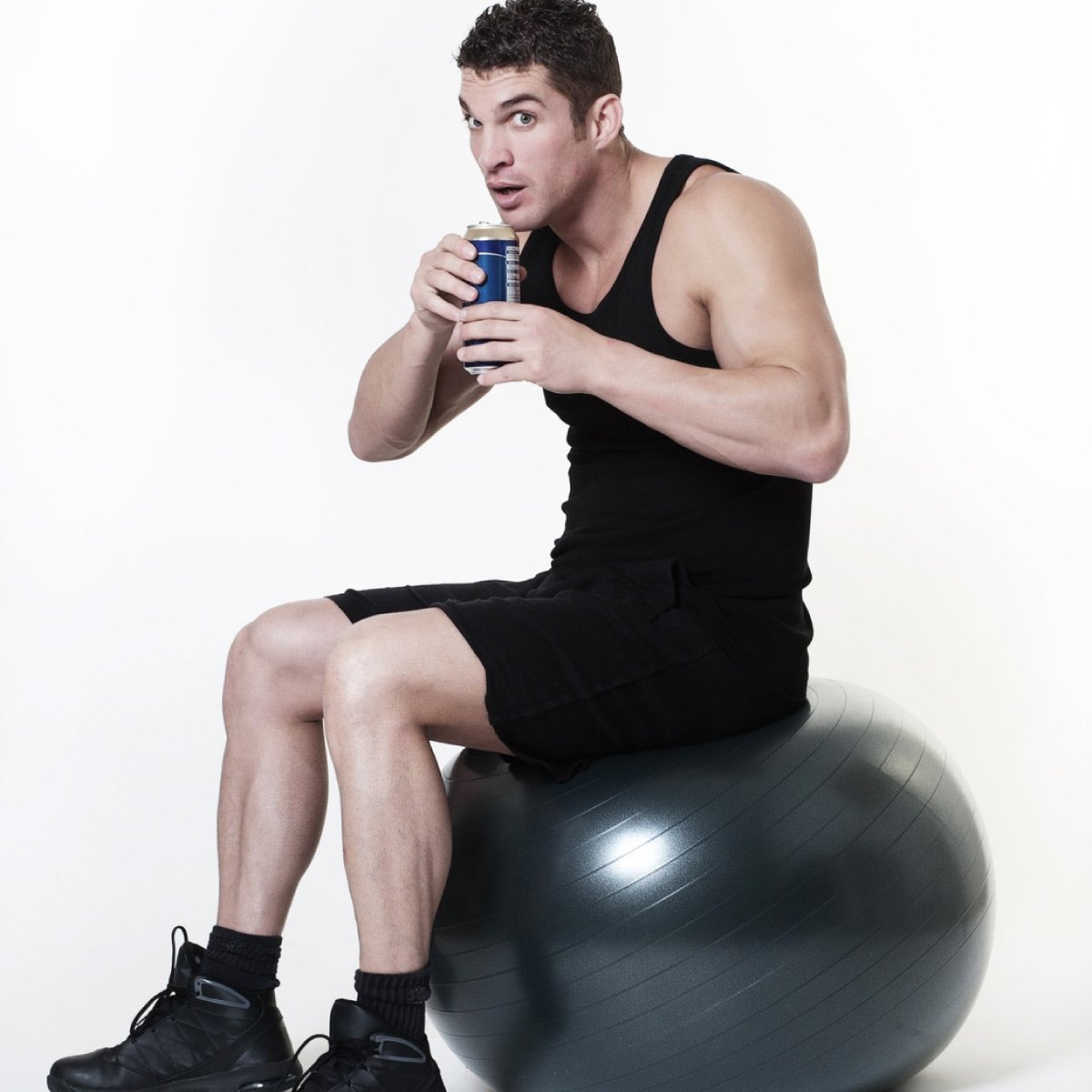 The fun will never end if you decide to play these games. 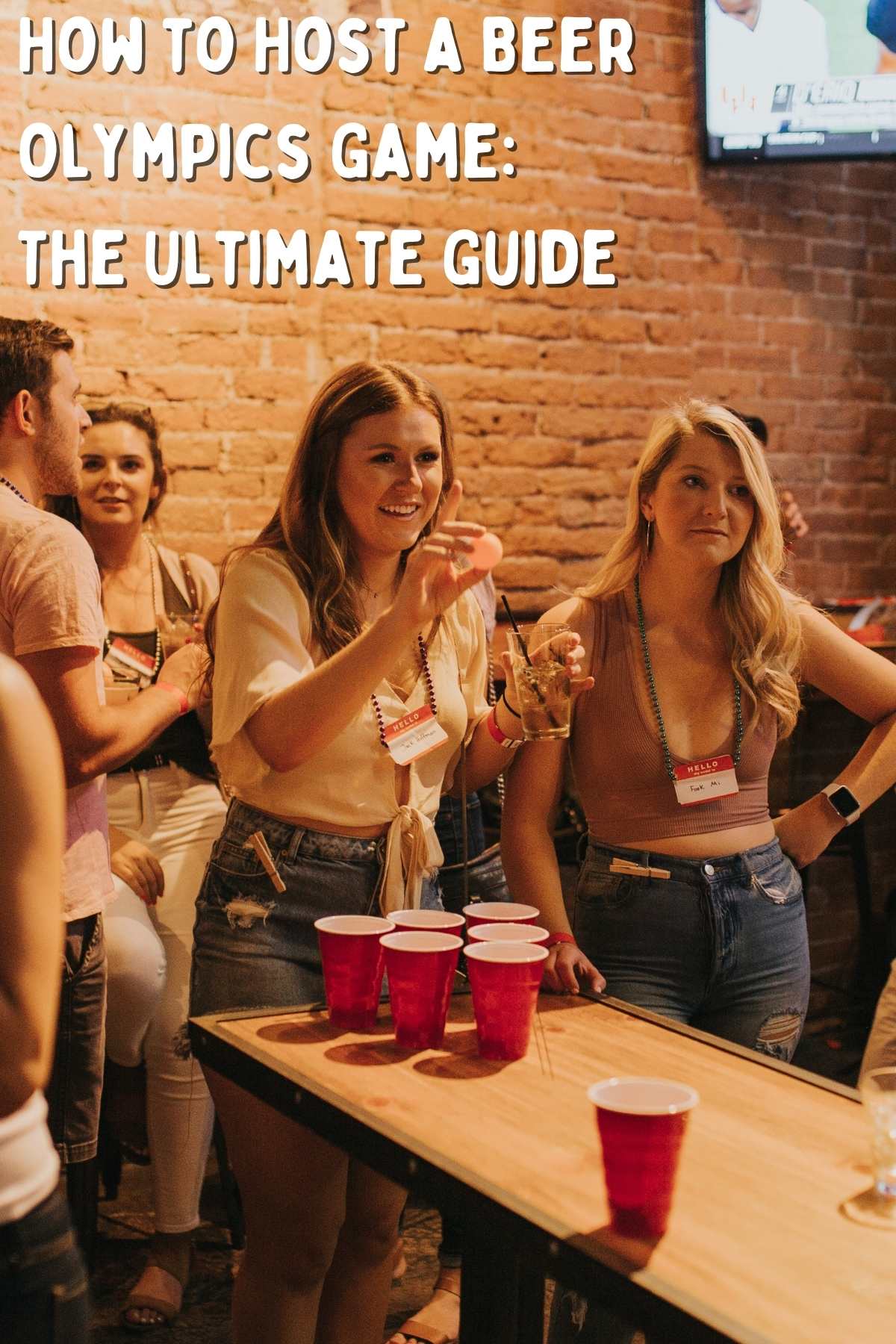 How to Host a Beer Olympic Games Party

I broke this question up into a few parts. But to start, you need to pick a day as I said, preferably a weekend. That way if you have a little too much, you can sleep in and not have to worry about work. Always Drink Responsibly!

Once you pick your day, invite as many people as you want. The more, the merrier at a Beer Olympics Game! A good way to save money on cost is to have everyone bring at least a six-pack of beer. Since you are hosting, it is recommended that you keep a good backup stash just in case you run out. But that can be the cheap stuff.

And lastly, before your guests arrive, you are going to want to set up. I am talking gaming stations, decorations, coolers of ice and beer, and of course, a station of snacks and water. Stay Hydrated!

How to Host a Beer Olympics Game: Rules

The rules are as simple as the point system:

Don’t Cheat. Cheating is the opposite of fun, and since the games are simple, there is no point. If you get caught cheating, a player will have to chug a whole beer.

If you throw up, you’re out: There will be a designated area for the people who aren’t doing so hot to hang out. Everyone handles alcohol differently, so be very careful and know your limits. This is the best way to have a fun and safe night. Beer is one of those alcohols that fill your stomach quite a bit, so all of these games would easily trigger this kind of reaction.

Each game with have a different set of instructions and rules, so play according to those. Down below, I have 15 of the best games to include in your beer Olympics game. But I figure that next, we should cover decorations before we go any further. They are so cute; I cannot wait for you to see these.

I think that decorations are half the fun when it comes to parties like these. I know that it can be easy to call it good and just focus on the beer olympic games, but adding a little more flair will make the atmosphere feel even more special. Take a look at these simple decorations that you can add!

The additional games are the reason you are all there and can be added to the ones above to give you plenty of options. There are so many that you can play that only require a few basic supplies. This list below just scratches the surface, but it’s a great place to start.

Some of them of classics and some are new. How to play the newer ones is explained in the videos attached. 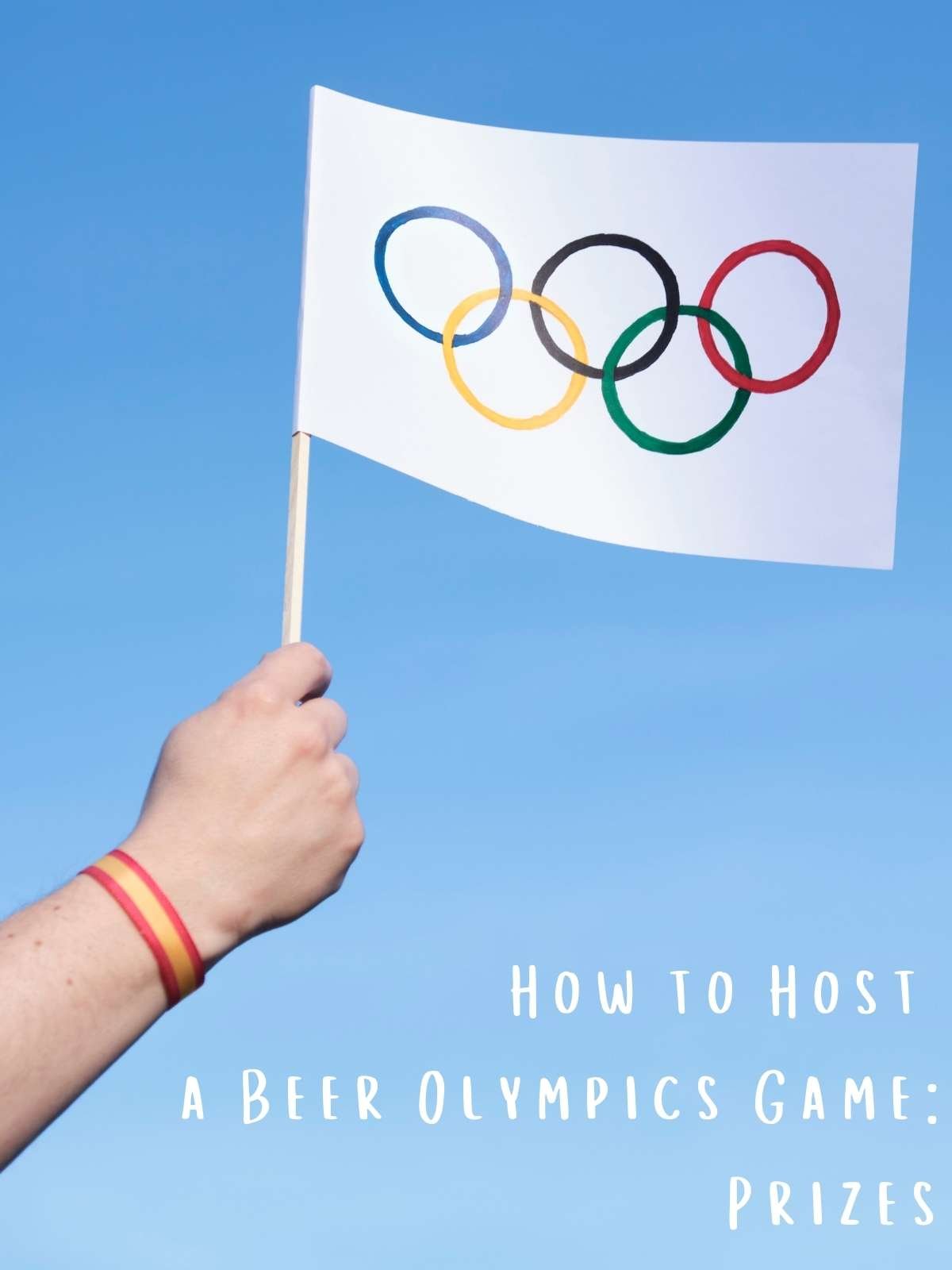 You have to give the winners SOMETHING to work towards. Take a look at these hilarious ideas for a beer Olympic games prize award. There are so many cute ones that your guests will fight for. Yes, they are a little silly, but the whole party is silly! Who says you need some fancy prize when the party is already laid back anyways? So take a look and pick the ones you like the most!

So there you have it, how to host a beer Olympics game: the ultimate guide. I hope you found this helpful and that you have loads of fun. The last one I went to was arguably one of my all-time favorite parties that I have ever been to. It will live in my hall of fame forever.

If you want some more ideas for different drinking games that you can include at your beer Olympics, then you are in the right place. We have covered so many awesome types of drinking games your fun will never end.

At least until you can’t hold your beer anymore, then it’s time to drink water and sleep. Remember to try and pace yourself and to drink responsibly.