Inside: Compete in these Minute to Win It Team Games.

Having a big group gathering soon? Then these super fun Minute to Win It Team Games are the perfect games for you! Whether it is a big family gathering, Sunday school get-together, work party or someone’s birthday these games are a HIT for groups of people!

They are fun to play and easy to set up. 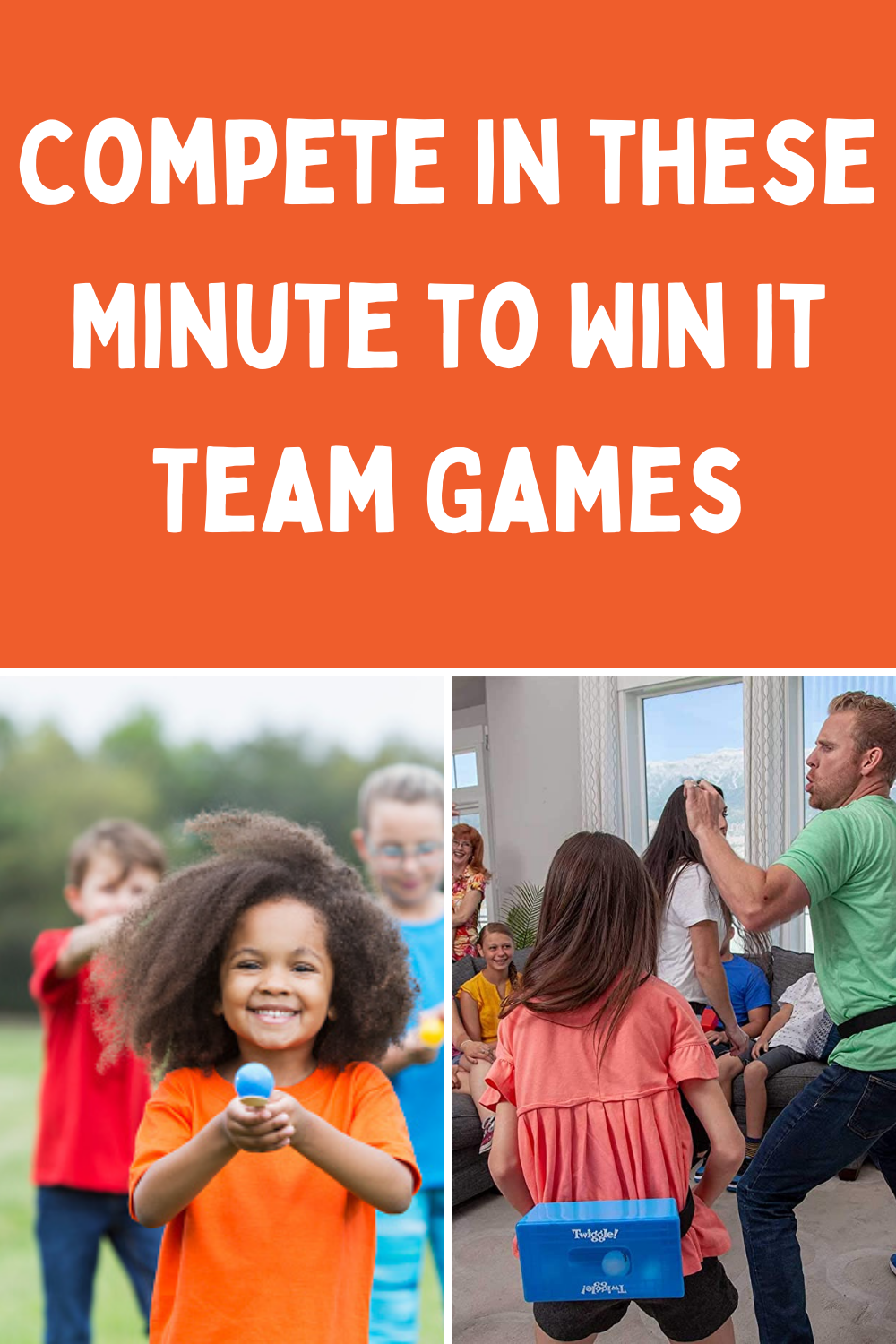 How to Play Minute to Win It Team Games

In this style, you’ll split your group into two (or 3 or 10 depending on the number of guests) teams. For each game, teams must choose one player to compete head to head in the game with the other teams.

So for instance, one person from each team will be given the supplies and game instructions. When you say go, everyone competes to be the first to complete the game.

The first team to finish gets 5 points, the second team gets 3, the third team gets 1, and everyone else gets none. This works best if you have quite a few people and is a good way to get everyone involved cheering for their team.

Minute to Win It Team Games

Wrap It Up: A two-player game where one person has to wrap the other person in streamers, toilet paper, or something else

Balloon Collector: Blow up several balloons and place them on the floor. Set a timer for one minute. Send the first player into the balloon pile to try and collect as many as they can in one trip. When time is up, count how many balloons the player was able to carry at once. Return the balloons to the pile. Give each player a turn to do the same. The player who collects the most wins. 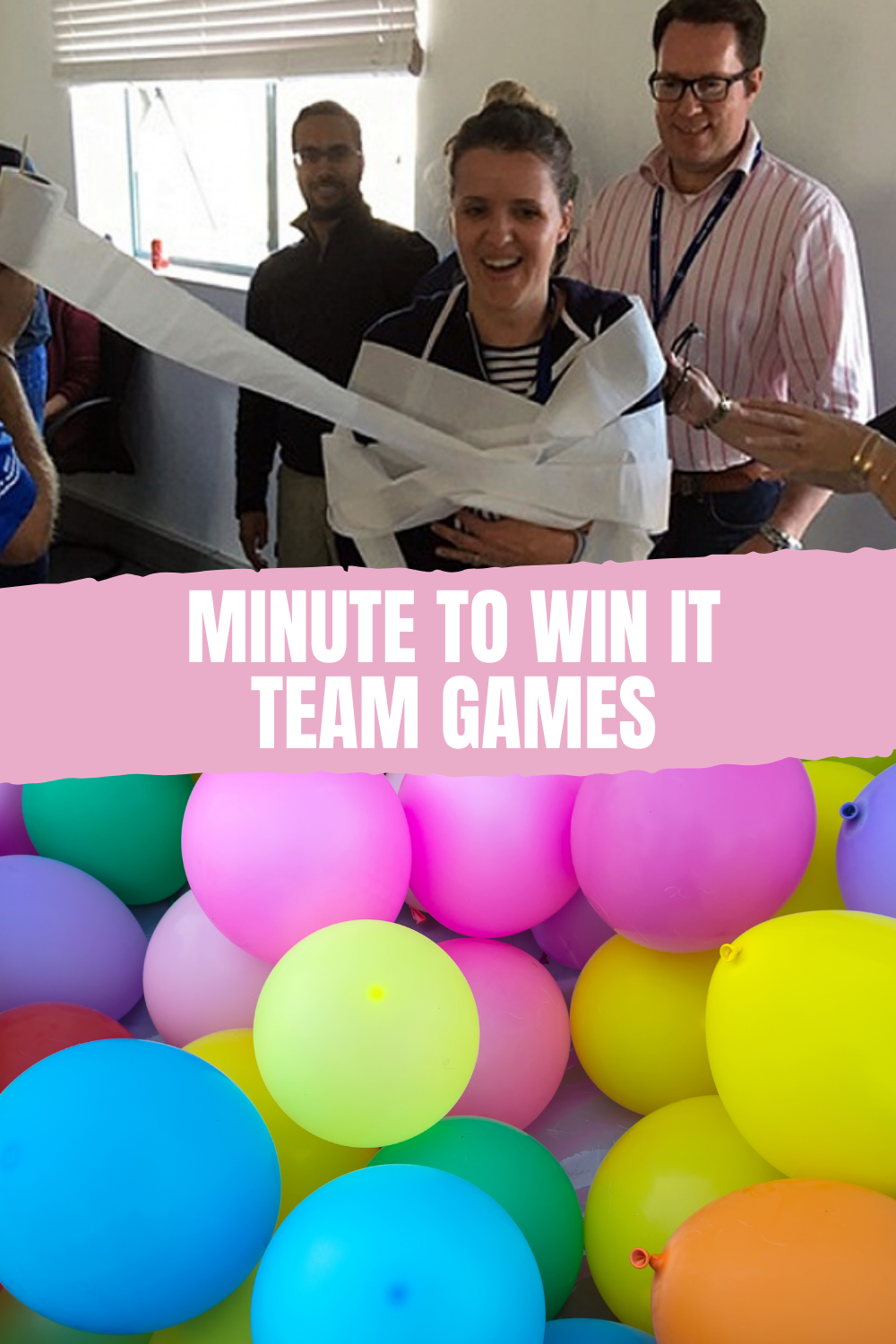 Battle of the Bands: Pick a letter and have players write down bands or musical artists that start with that letter. For example, “R” could mean the Red Hot Chili Peppers, Reba McEntire, etc. Whoever has the most on their list at the end wins. Work your way through the alphabet if you need tiebreakers.

Blindfold Bowling: The rules are simple – bowl blindfolded as many times as needed until you knock all the pins down or until the minute is up. This is definitely one where you’ll want a team to help get the ball(s) back to whoever is bowling!

Oven Mit & Hersey Kisses: Okay this is such a funny Minute to Win It Game for groups! Check out this hilarious video of people competing to unwrap the kisses!

Balloon Word Search: Divide guests into two teams. Make two sets of six balloons. Write the letters to spell out the word W-I-N-N-E-R on each of the six balloons. Scatter the balloons around the party area. Have the players race to find the letters that spell the word. The first team to collect and arrange their balloons to spell “winner” 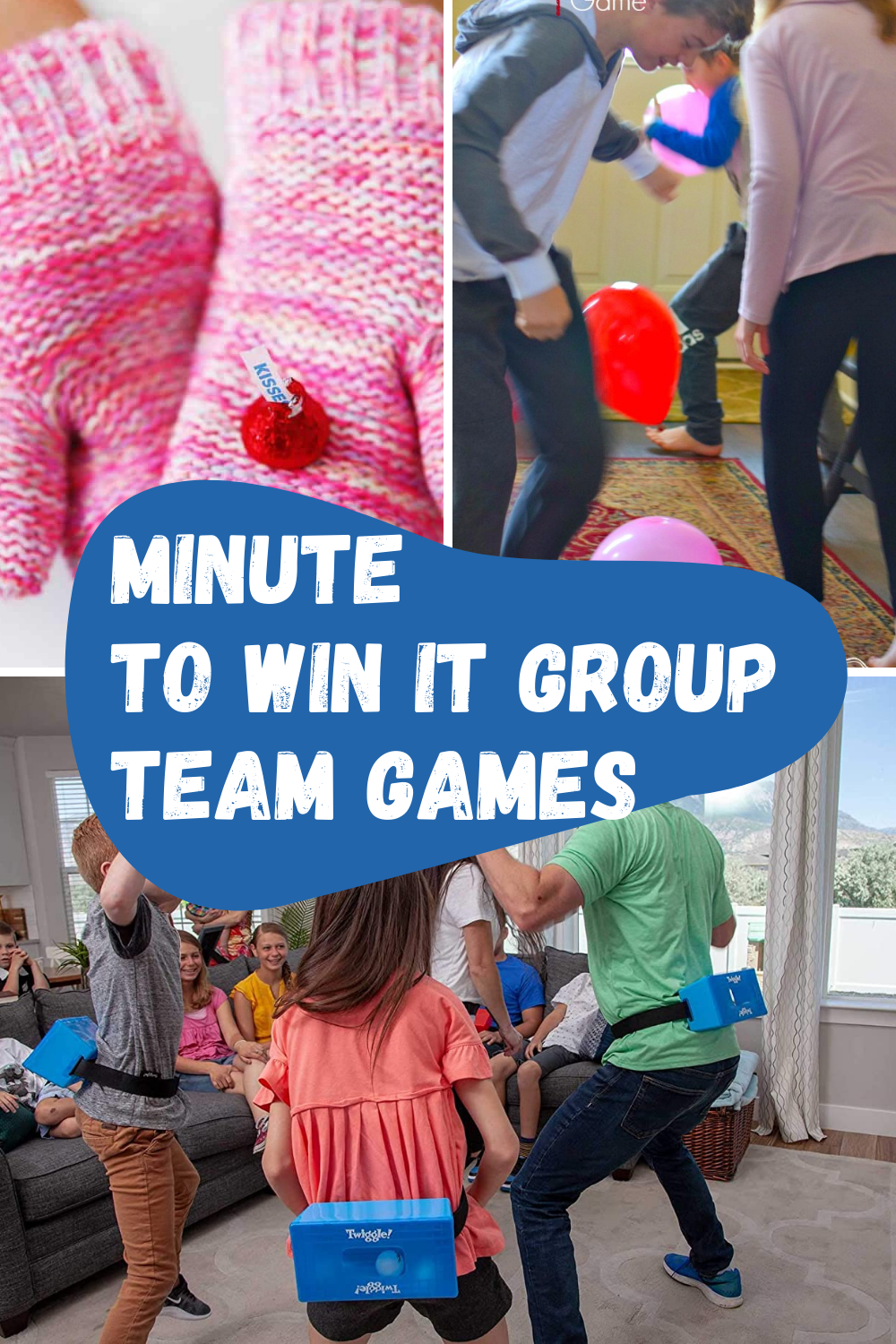 Junk in the Trunk: This game was another crowd favorite! To prepare for this game, empty a tissue box, and use an Xacto knife to make two slits into the bottom of the box. Thread an adjustable belt or wide ribbon through the two slits to create a tissue-box-on-a-belt. Removing the thin plastic barrier from the tissue box opening will make game play easier (for younger children) or keep it intact for more challenging play.

Needle in a Corn Stack: Then the challenge was to find the three kernels in one minute!  You can easily make this game more difficult for older kids by using a larger bowl and more corn.

Compete in these Head to Head Challenges

Wall Bounce: Have participants bounce a ping pong ball off the wall and into a bucket. Whoever has the most balls in the bucket at the end wins. To have multiple players at once, simply use different colored balls or write players’ initials on them.

Egg Race: For this classic game, give players a spoon and an egg and have each of them run a short distance without dropping it. Ramp up the challenge by having players put the end of the spoon in their mouth. Run the challenge relay-style with teams or simply see who can make the trip the most times before your timer goes off. 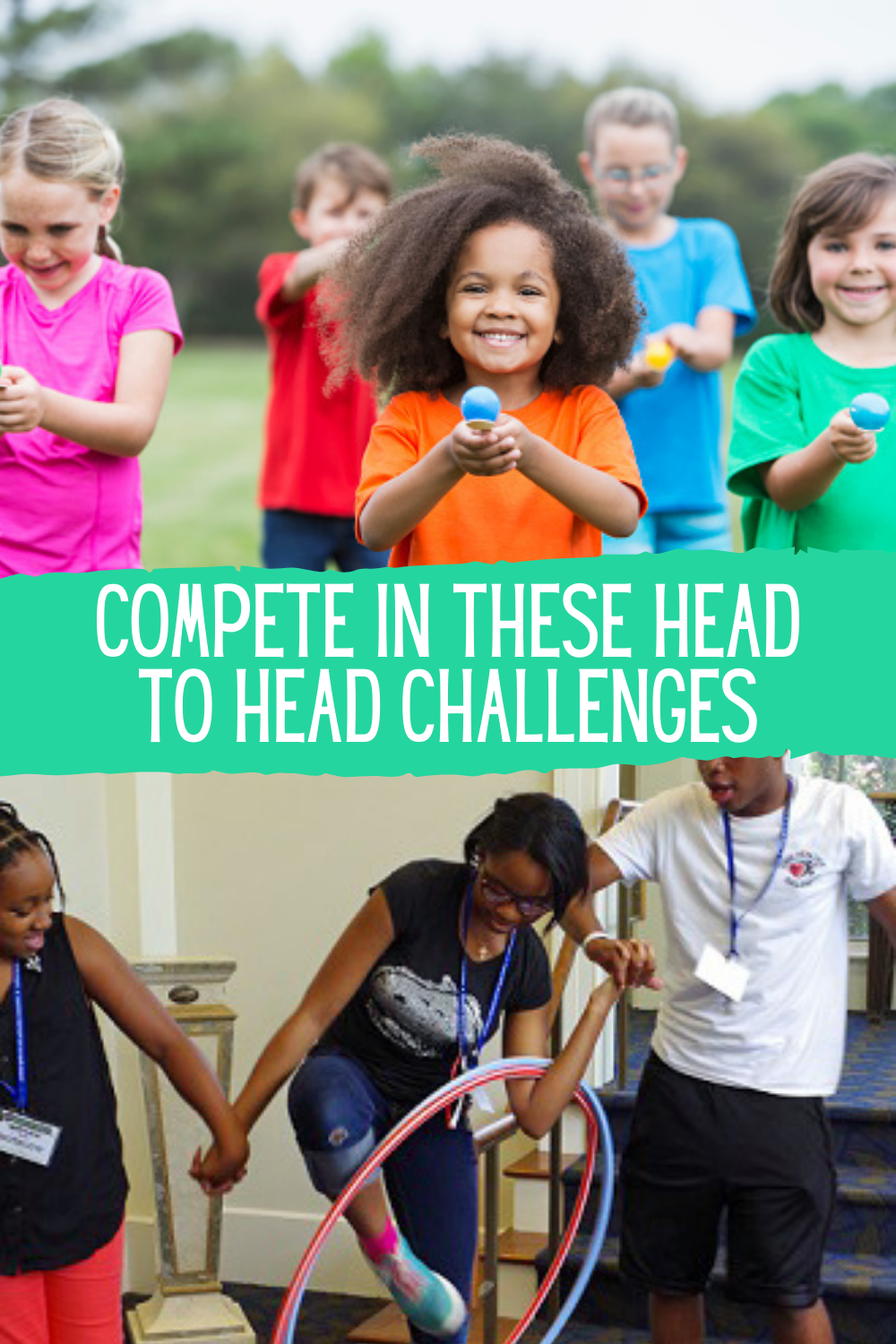 Through the Hoop: Have each group stand in a circle. When the timer starts the first team to climb through the hoop without breaking the circle, wins.

Color Pop: Give each team a bunch of inflated balloons (use an even amount of balloons for each team, but make each set a different color) and a chair. On “go,” the first players in line for each team must run, get one of her colored balloons, bring it to the chair and sit on it until it pops. When it pops, they can tag the next player in line, who must then grab a new balloon and sit on the chair to pop it. Play continues this way until one team has popped all of its balloons. The first team to do so wins.