Inside: How to play the Hocus Pocus drinking game.

Everyone has seen the Halloween classic movie Hocus Pocus. In which 2 kids move to Salem, Mass. and it is there that they accidentally free a coven of 3 evil sister witches.

The movie is spent with the kids trying their best to steal the coven’s book of spells so they can stop them from becoming immortal. Yep… it’s a classic alright!

Is there a sequel to the movie?

Yes. Hocus Pocus 2 is coming out this year! The release date is currently set for September 30th, 2022

To celebrate we obviously need to drink up that potion and get in the bewitching mood.

It made our childhoods and hearing the name now sparks a sense of nostalgia that is unmatched. So how do we take this old kids’ movie and rework it into an adult must-watch?

Well, we turn it into a drinking game of course.

The hocus pocus drinking game has become a go-to for adults during Halloween time. It’s simple and hilarious, and you will be more than tipsy before the movie is over. Interested?

What is the Hocus Pocus drinking game?

The hocus pocus drinking game is essentially a challenge where you get together with a group of your friends (and alcohol) and have to take a drink every time a specific something happens in the movie.

This is basically how you play any drinking game, but that’s why it works. Can’t fix what isn’t broken. There are ways to spice up the game though, to make it more themed and specially designed for the movie you are watching.

That’s what I did here, I took this classic game and added a few things that will just add to the fun.

How to play the Hocus Pocus drinking game?

First things first, get your movie qued up in the player, waiting for the game to start.

Next, you are going to create a game spinner. To do this, you take a piece of paper and draw a large circle onto it. Divide that circle into different sections. In those sections, you can put tasks like:

Then, after you’ve done this you are going to want to take a push pin and stick it right into the middle. I think you can guess where I am going with this. Lastly, just put your paperclip onto the push pin, and there you go.

After this, you can decide on what words will be your call to action. These are the words that when they are said, you have to take a drink. But the difference here is that instead of just drinking, you flick the spinner and see what it decides you do.

It just adds that extra layer of suspense. 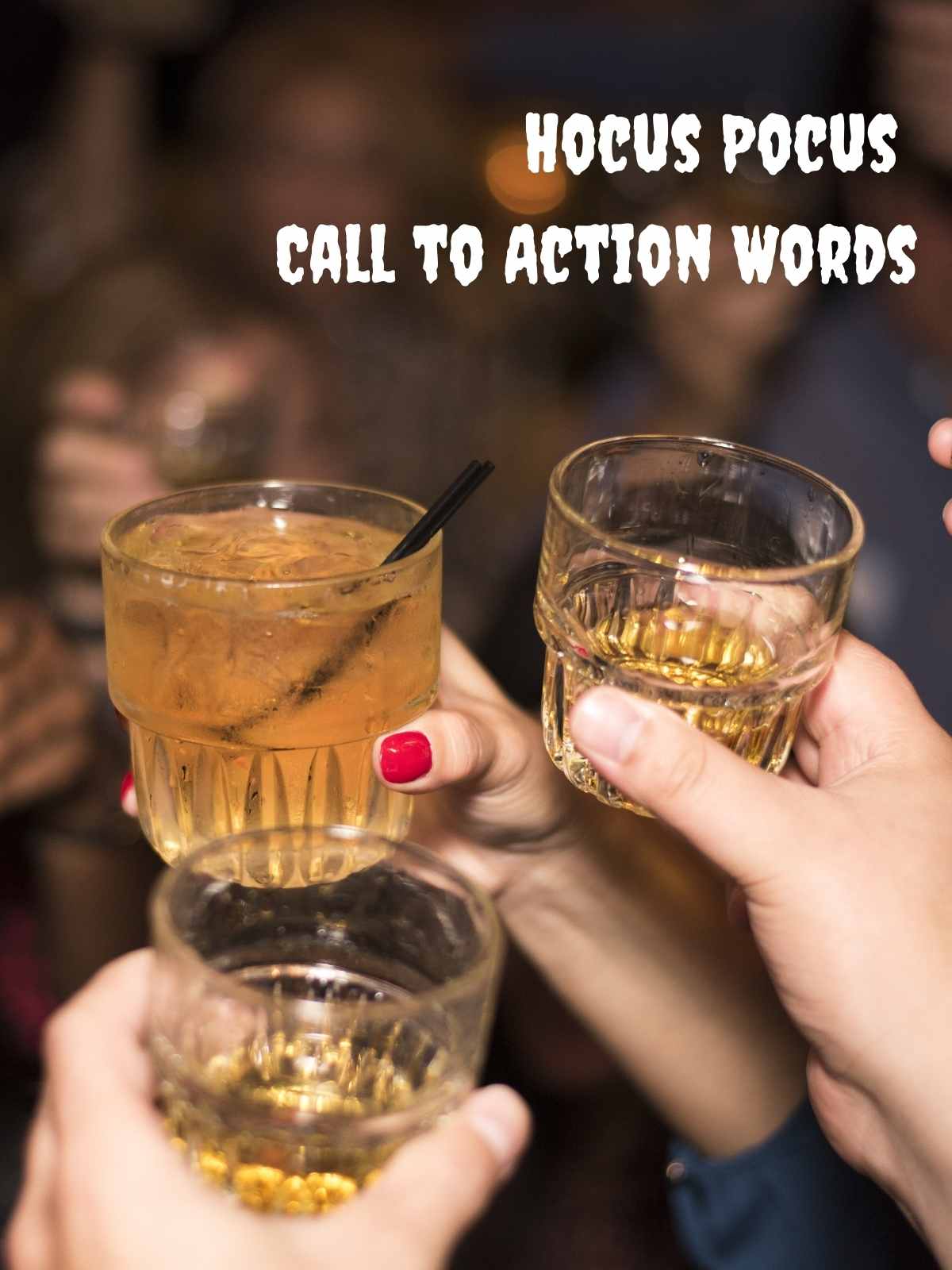 When you hear these words or see these actions…you flick the spinner and take a drink. I understand that having to pause it to spin can sound like a chore, but it just prolongs the game in the long run. Making the fun last longer. So what are you waiting for? Take a look at the list below and choose 5-6 of these call-to-action words to use in your game. Any more than that and you won’t make it past the title screen.

1. Witch – I love this because it is just asking for trouble, and it’s the first word. Better have some water handy to keep yourself hydrated.

2. When the witches say ‘Sistahs’ – This is a classic phrase that is used in the movie and is a must-have for this game. Good luck.

3. Adult Inuendos – A staple of any good children’s movie is the hidden adult jokes that we don’t understand until we are older.

4. When the Movie’s Name is said – Whenever a character says the movie’s name…take a drink!

5. Book – This is another dangerous one seeing as the whole plot surrounds them getting the book to stop them from becoming immortal. So it’s perfect.

6. Thackery Binx Death – Take a drink every time Thackery dies and you may not make it to the end of the movie.

7. When the sisters cast a spell – This is a wonderful one because it happens often enough that you will still be drinking, but not every 5 seconds…so you may be able to get to the end of the film.

9. Every Time Dani Cries – We love our younger siblings, but they sure are whiners.

10. Dude – I love this one because it gets said SO OFTEN. Every time someone says the word dude, you have to take a drink!

11. When Thackery is Sarcastic – This man or I mean the cat is the king of sarcasm. So you better be repaired to spin the dial and get your drink on.

12. Billy loses a limb – Ah Butcherson is always losing something. And when he does, you will too. You’ll lose your ability to drive.

13. When you see a salt circle – Salt circles are a classic spell for protection. You will see this in the movie, and when you do you take a drink.

14. When Binx turns human – When Thackery changed from his cat form to human form, you have to finish your drink.

15. Sanderson Sisters – This is another good one. Anytime anyone talks about the Sanderson sisters then you have to take a drink! 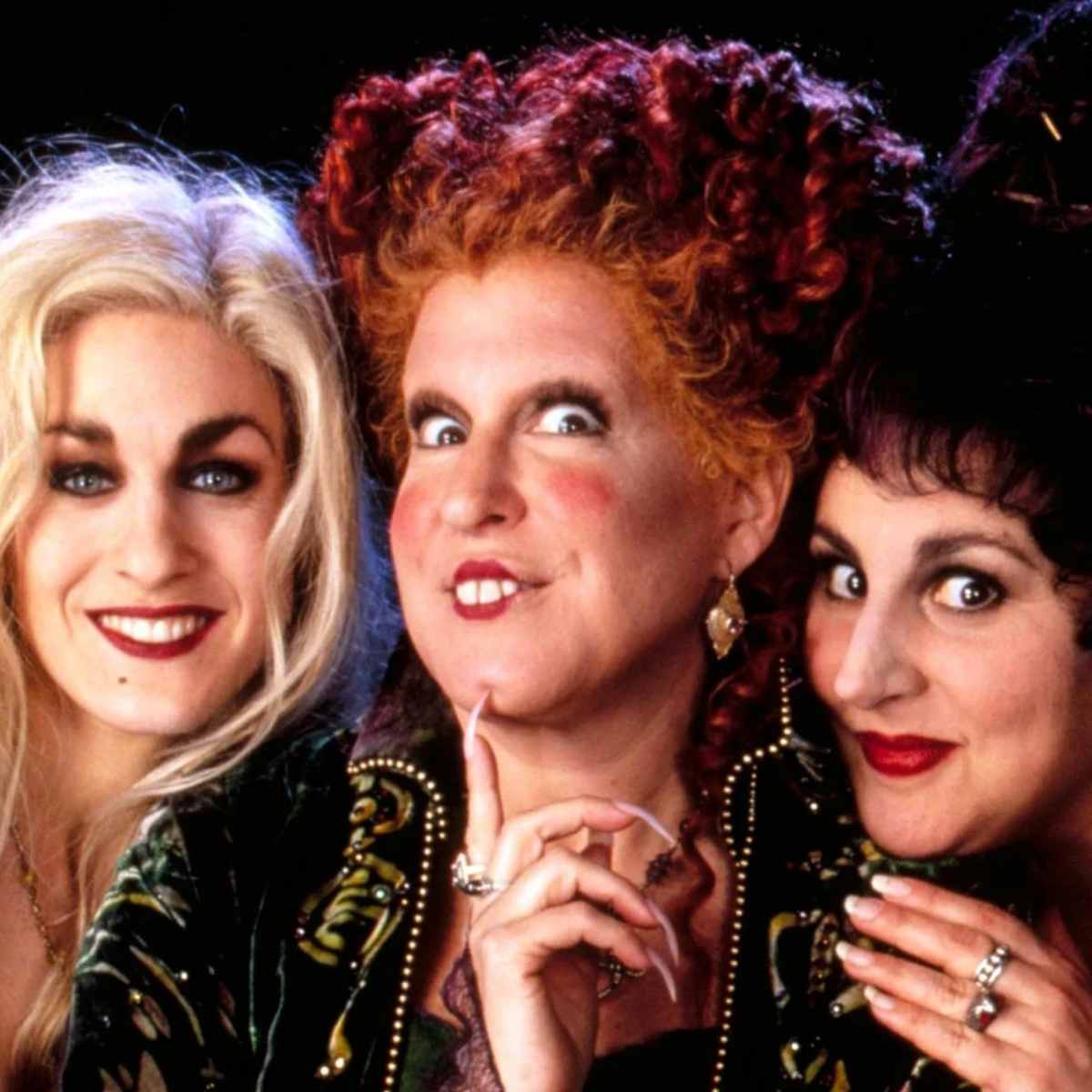 16.  Virgin – Hilariously enough, this word is used more times in this movie than I think I’ve heard it in real life. Yeesh!

17. Ice – When Ice’s name is said, take a drink. This doesn’t happen AS often but it gives you something to hunt for throughout the movie.

18. The Sisters are Confused by Technology – This one is hilarious, and it happens so much throughout the movie I just had to include it.

19. When the Book Moves – The book blinking is one of the creepiest things in the whole movie…at least in my opinion. I hate it!

20. Sentimental Moments – These are strewn about the movie but most of them happen towards the end so it’s a great finishing move.

There you have it, the ultimate guide to playing the Hocus Pocus drinking game. Remember to always drink wisely, and have lots of water handy. You will want to replenish your body and rehydrate, but other than that…have at it! This game will leave you sloshed before the halfway mark.

Drinking games are an awesome and fun way to revamp old movies and enjoy them in a new way. Plus you get to appreciate the film a little more because you are paying more attention to the dialog (at least until you’ve had one too many and can’t focus).

So that is a plus.

They are also a way to really bring people together. There are so many other awesome fun ones that you can try, the possibilities are endless! If you can’t wait until Halloween to play this, don’t!

Get everyone together whenever you are feeling so inclined, because a good time knows no schedule.