Inside: The ultimate guide to the Hamilton drinking game, how to play it and why it’s so much fun!

I have something extra special for you today. I am guessing that you have heard of the broadway hit play Hamilton (if you haven’t, I go over what it is down below). Well, today, I am going to teach you how to make this already awesome play even more enjoyable: By turning it into a drinking game!

I hosted a Hamilton party last week, and this game was the star of the show (and the reason why my friends had to get Ubers home). It was super fun, super simple, and gave me an excuse to watch my favorite broadway play with all my favorite people. Are you interested?

I hope the answer to that question is yes because today, I will go in-depth about how to play the Hamilton drinking game. I talk about what it is, what you’ll need, and how to play, and I even have a list of drinking cues for you. So what are you waiting for? Let the fun begin!

So, for those of you who have lived under a rock for the past eight years…I want to go in-depth about what Hamilton is so you can know what you are in for. Hamilton is a Hip Hop Historical play that was written by Lin Manuel Miranda in 2009. It debuted on Broadway 6 years later, and the world has never been the same.

This musical has become a household name because of its unique hip-hop style and approach to something that is typically kind of boring(at least in my opinion). But Miranda knows how to tell a story, and he has done so with this play in a way that can make even a small child interested in this piece of history.

According to an article written about the play, “The show follows the remarkable life story of Alexander Hamilton, one of the Founding Fathers of the United States. Its creator and star, Lin-Manuel Miranda, retells the tale using rap music and lyrics that tackle even political deal-making: “Two Virginians and an immigrant walk into a room/ Diametrically opposed, foes/ They emerge with a compromise, having opened doors that were/Previously closed/Bros.”

I won’t go any further into depth for the risk of spoiling it if you haven’t seen it. So now, let’s get into the game. Shall we?

What is the Hamilton Drinking Game?

As you may have guessed, the Hamilton drinking game is a game you play while watching the movie. You will take a drink every time a drinking cue happens(you and your group will decide on these below). There are no winners or losers(unless you pass out before it’s over, then you are out. Literally and physically). The whole point is to have fun and enjoy this play in a very adult way.

So, that is what the Hamilton drinking game is. Next up we will discuss what you will need. Then finally, we will go over the different drinking cues you and your friends will choose from. 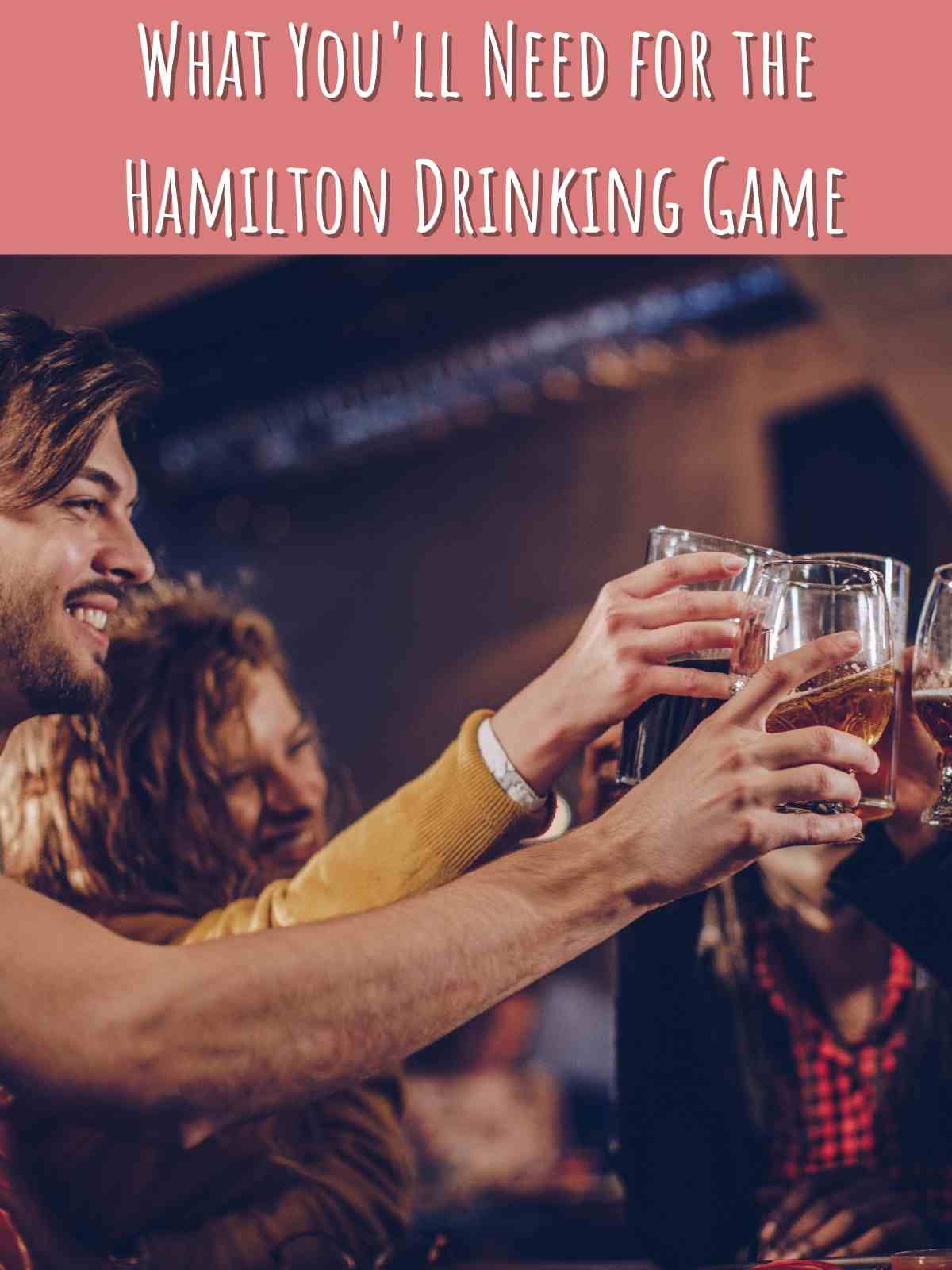 What You’ll Need for the Hamilton Drinking Game:

You will need a few things to be able to play this drinking game.

There aren’t many rules when it comes to this game. You just have to watch for the drinking cues you’ve chosen and take a drink when you see them. Some people designate a certain amount of drink for each cue(like a shot, a sip, etc.) But I figure that it’s a pretty long movie. You will have a better chance of staying awake until it’s over if you take it slow and just take sips of your mixed drinks every time you notice a cue.

There is one specific rule, though; When a main character dies, you have to drain your glass. Besides this, every time you see a cue, just take a sip. Now for the fun part. Go through this list of cues with your friends and decide which ones you want to use.

I made sure to divide them into groups. These groups go from easy to blackout. I explain what this means for each round. So take a look and decide!

These are lighter drinking cues that you can use. If you are hoping to avoid a hangover, this is the list to go with. But I also recommend mixing and matching to create your own list.

If you want to feel the buzz, then this is the list for you, my friend. This is the perfect group of medium-said phrases, so you may get drunk but you won’t be blacking out. That is always nice.

This is not for the faint of heart. These phrases and cues happen all the time. That is why they are on the blackout list. So if you think you can handle it, you got yourself a challenge! 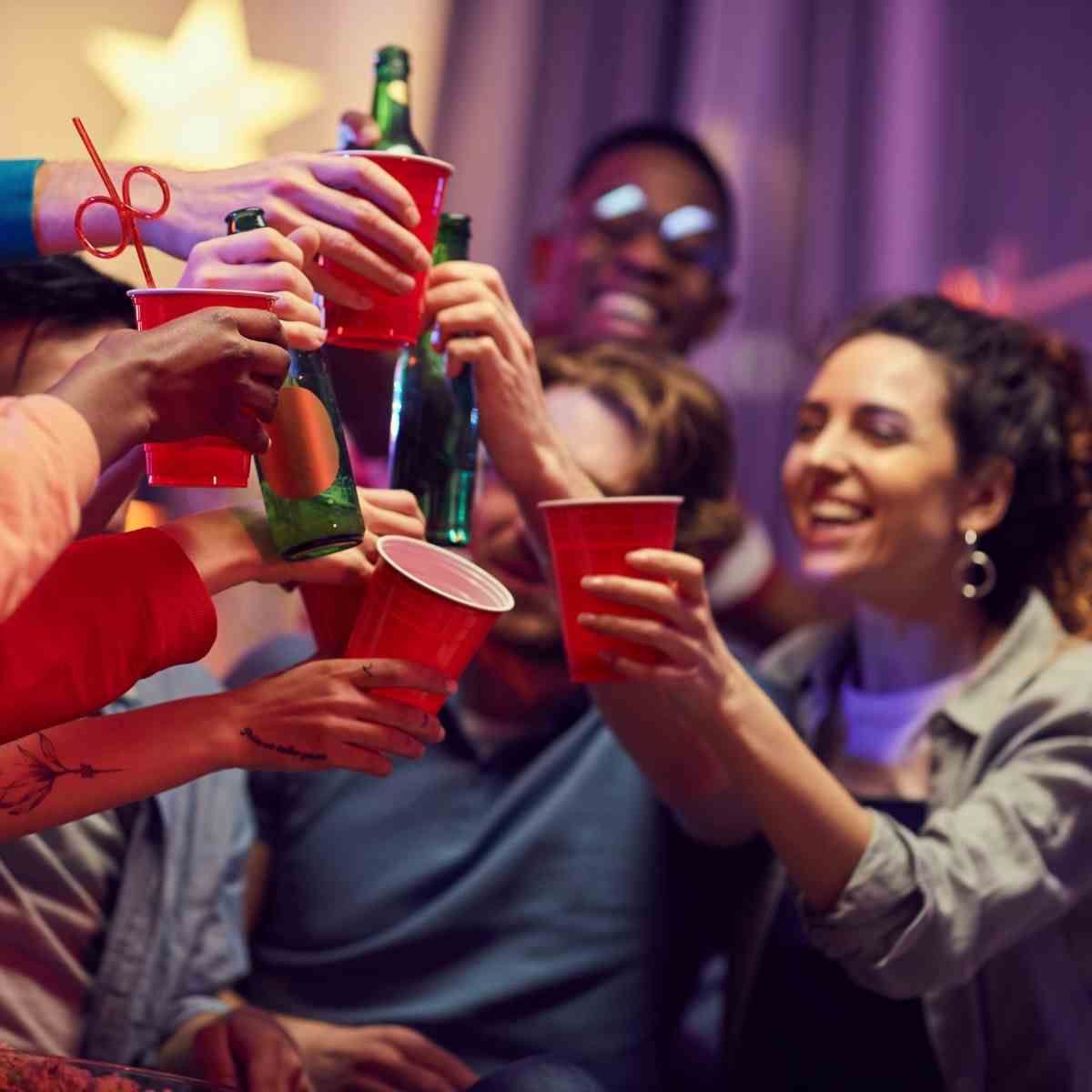 So…what do you think? Are you already calling up your friends to plan your get-together? I hope so! If I didn’t literally JUST have a Hamilton party, I would be doing the same thing. I don’t think it would be socially acceptable to host 2 in a month.

If you loved this drinking game, then you will love the others we have on here. They range from nostalgic to just downright fun. So take a look at those. Remember to always drink responsibly!