Inside: The best man cave games to include in your space.

A man cave is your designated space to just kick back and do the things you want to do. Many people like to fill theirs with games and other fun activities. There is truly so much potential with such a small space.

I have found that there are a few must-have items to include when you are putting together your man cave, so I figured I’d create a list of some of the best ones.

This way you can get a good feel for what kind of cave you are trying to set up, and have some direction on how to do it. 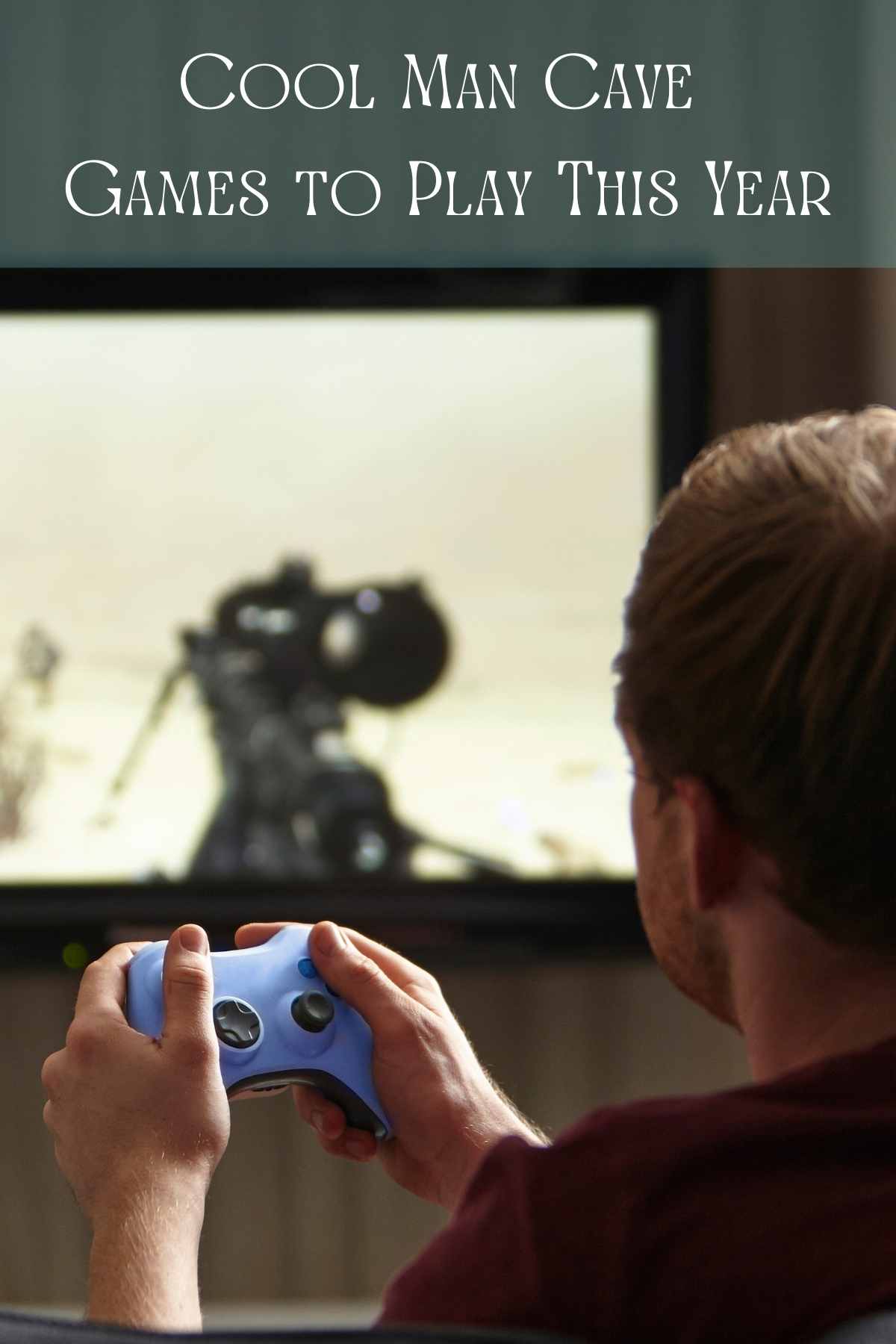 But before we get into that, let’s briefly discuss how to go about doing this depending on the space that you have. It can be confusing, and I know you want to make the most out of what you have.

How to Set Up a Man Cave Game Room

The first thing is first, what do you enjoy doing with your free time? Movies? Video games? Board Games? Get clear about this. Then we can move forward. After you have done this, I recommend having stations designated around your room. One area for movies and digital games, another for in-person fun.

This way you can make the most out of what you have while also keeping it organized and feeling good. Nothing worse than a messy man cave.

Fill the space with what you love, and your man cave will feel like your own little safe haven. In terms of setting up, that’s all you have to do. It’s simple right? The best things in life normally are. So let’s dive into the game options you have. After all, those are the most important factors of any man cave.

First up, I of course wanted to start with what I assume will be the more popular must-have: Digital games. Although I love a good video game, they are really taking over from classic games. Still, can’t resist the future…especially when it’s so cool. These are some of the most popular solo games you can play while in your man cave. 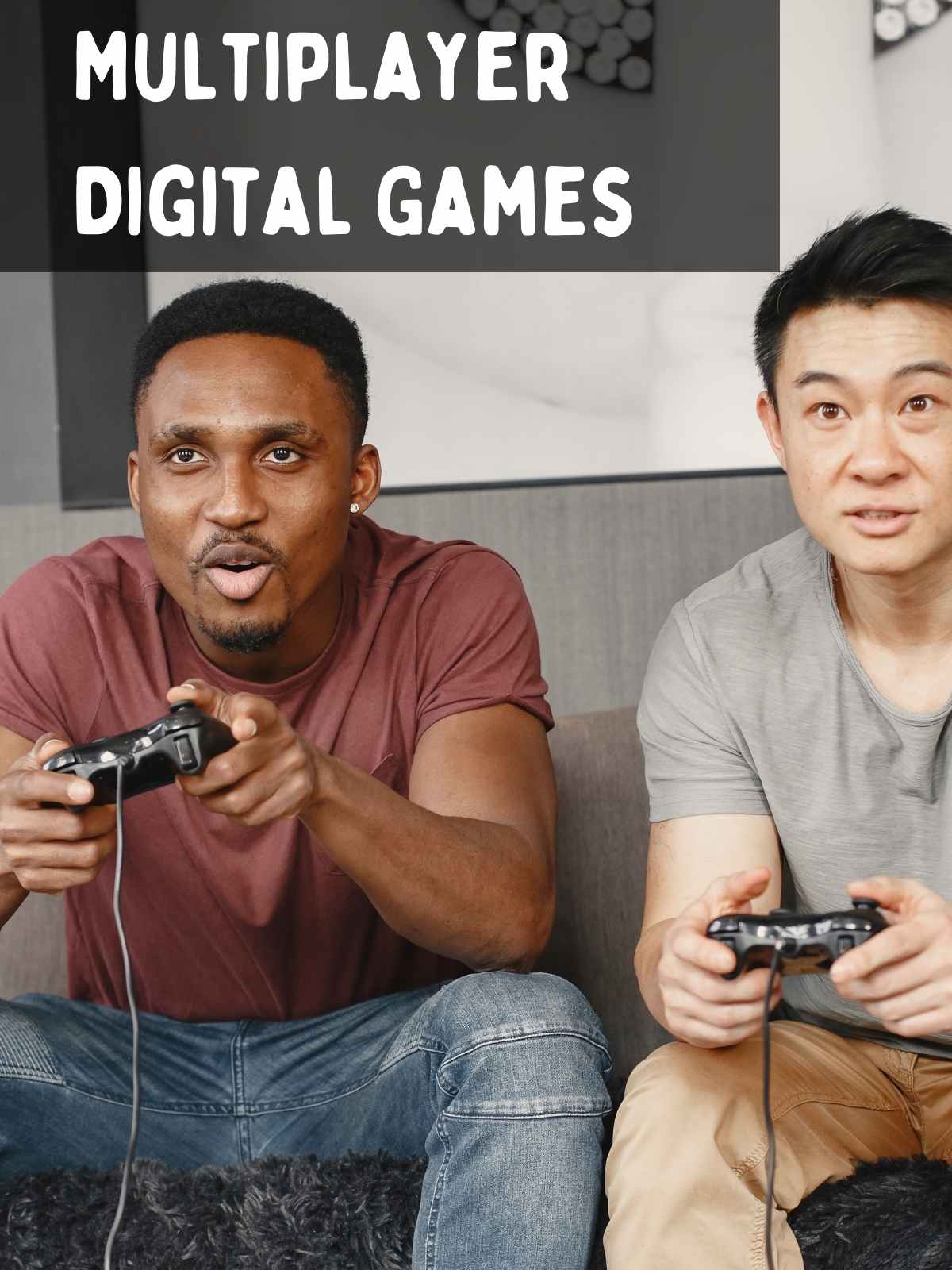 If you are looking for a game that you can play with your friends, then check out these multiplayer games that are sure to be a good time. They do vary by console sometimes.

For example, super Mario is just for Nintendo. But if that isn’t a problem then you are good to go! Check these names out. 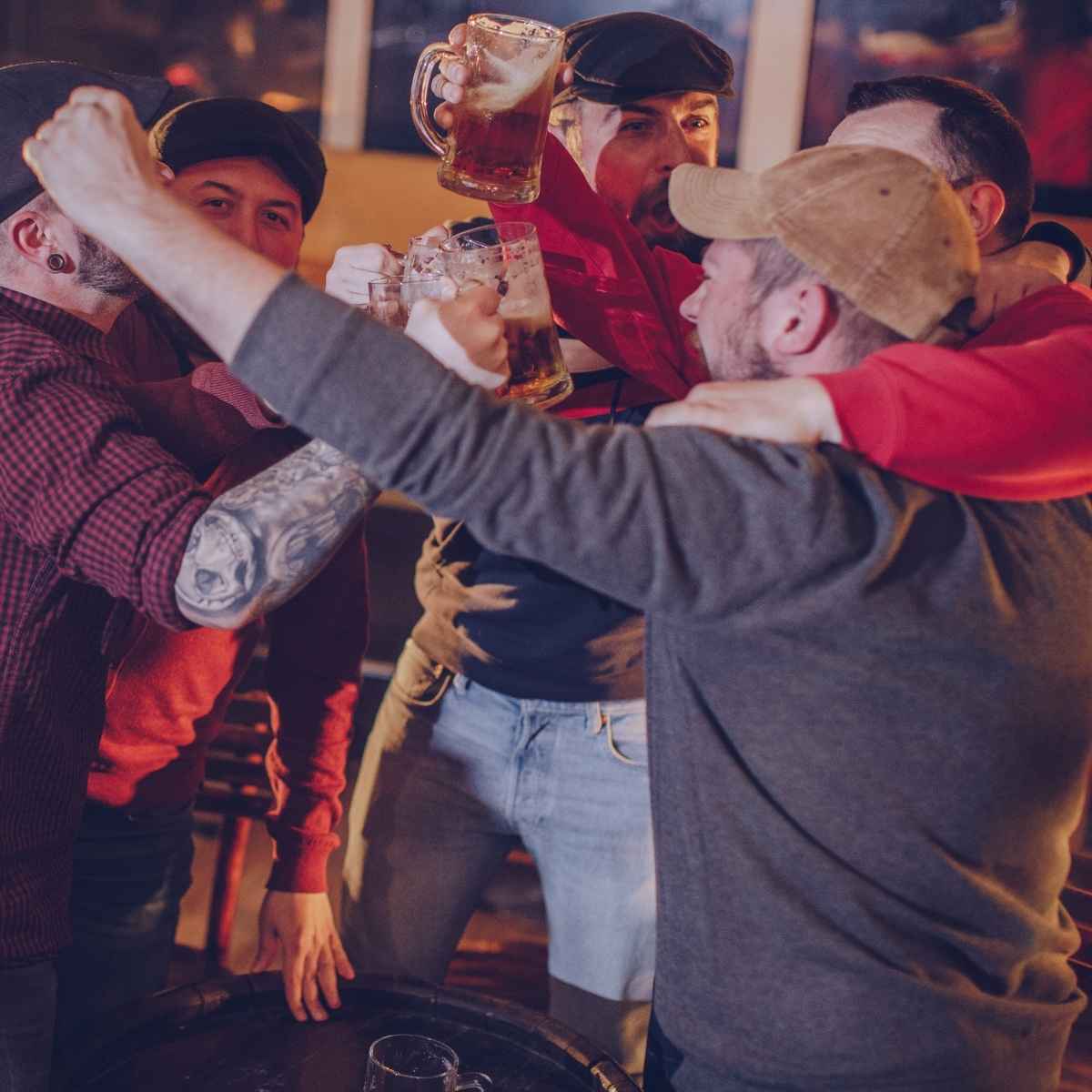 31. Towerball Bundle – This awesome bundled game set is a great addition because it gives you multiple games while taking up little space. Nothing worse than a crowded man cave!

32. Ring Toss – It may sound juvenile but the best games normally are. It’s a blast, I am telling ya.

33. Sports Trivia Game – You think you and the bros know everything there is about sports? Let’s put that knowledge to the test with this epic sports trivia game. Amp it up by making it a drinking challenge.

34. Ring Toss Shots Game – If you have internet access, chances are you have seen this game in a video or two. It’s simple, fun, and gets your heart racing! You simply have one shot on the board, and every time you swing the ring onto the peg you get to move it in the direction of your opponent. The first one to get the shot all the way in front of them has to drink it.

35. Epic Dart Board – Is it even a man cave without a dart board? I think not.

36. Bottle Cap Game – This is a two for the price of one: a bottle opener and a game. Talk about versatility.

Must Have Man Cave Games

37. Golf Corn Hole – It combines two super fun activities into one that is done indoors. Love this!

38. Pop a Shot – Can you ever really go wrong with mini basketball? No. The answer is no. If you have this, you will never ant to leave your man cave. Highly recommended for the women in your lives.

39. Connect 4 Jumbo Sized – I have found that taking classic games and just making them jumbo somehow amplifies the fun 10 times over. Don’t believe me? Just try it out. You’ll be sold.

40. Indoor Putting Green – If you like to go,f and want to get your practice in even when it’s rainy out…then what are you waiting for? Try this out!

41. Axe Throwing Game – This one might be slightly(or completely) for adults. If you do order this, play it with caution. But I have heard that these throwing games are ridiculously fun!

42. Beautiful Pool Table – If you have the funs, invest in a really epic pool table. It is a must-have for any man cave. If you don’t like this one there are plenty of other styles out there. Plus there are ones that actually transform into other game tables like ping pong or air hockey. Crazy right?

43. Jumbo Yard Pong – Though it says it’s for the yard, it’s really for anywhere. Like I said before, for some reason these jumbo games are just extra fun. I don’t make the rules here guys.

45. Foldable Foosball Table – If you are short on space, don’t worry. There are so many foldable game tables like this one that will give you fun, and the space that you are needing with your man cave.

46. Mini Bowling Set – Mini indoor bowling is another fun one to include. 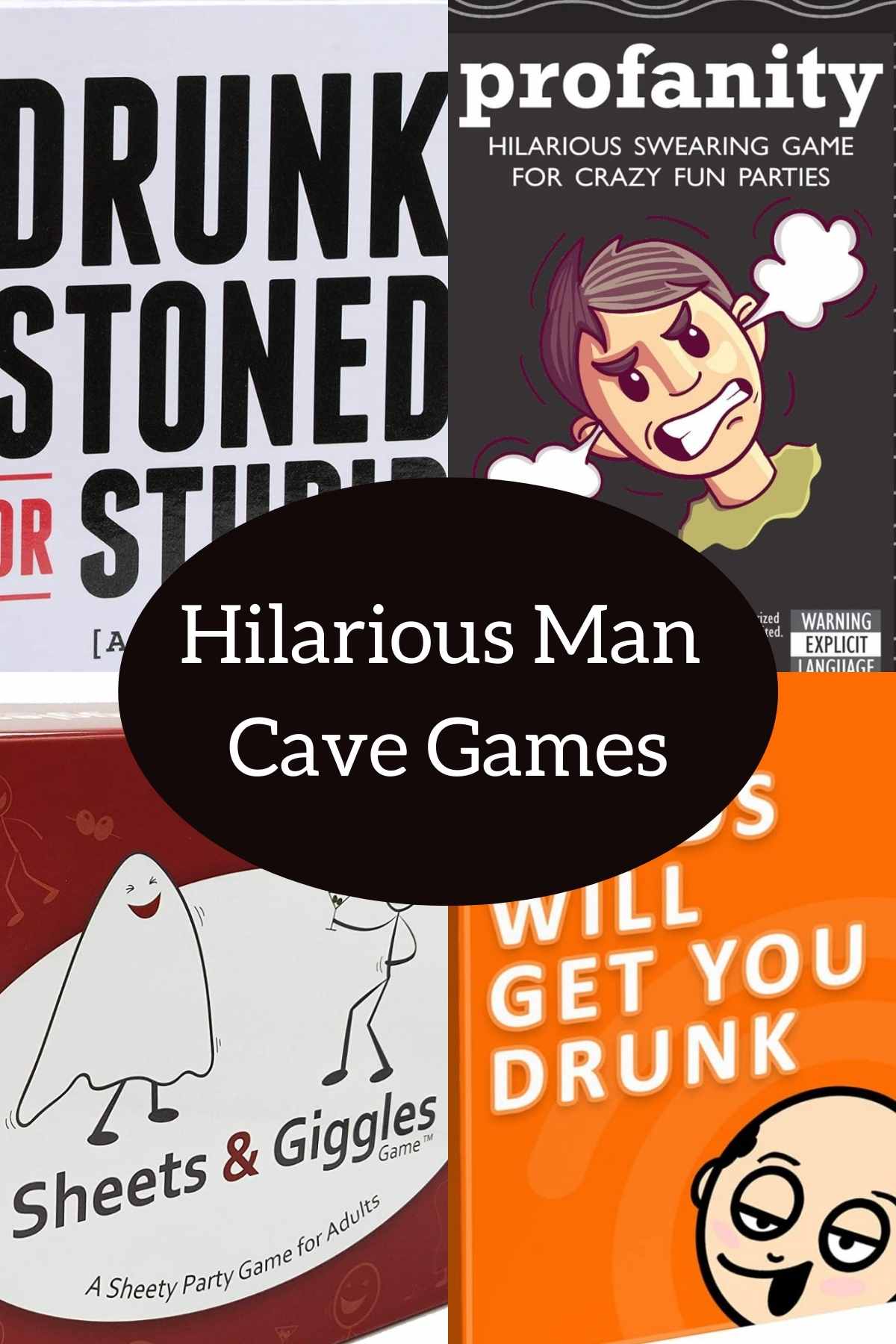 All of these games in the list below are hilarious card and board games that are guaranteed good time.

Take a look and order whichever ones you want in your good time arsenal!

54. These Cards Will Get You Drunk

61. Flip Cup – If you love drinking games then this is right up your alley. You line up plastic solo cups on the edge of a table upside down with part of it off the ledge. You then have to try and flip it right side up. The first person to finish wins.

62. Tortilla Challenge – This one is viral on TikTok and it is hilarious. It’s simple and SO hilarious. You simply need water and tortillas. Fill your mouth with water and grab a tortilla, and one person has to ask a question and if the other gets it wrong they get to smack them with the tortilla all while trying not to laugh. I’d lay down some towels first.

63. Laugh Out Loud – Write down different things that you think will make your opponent laugh, and the first one who does loses.

66. Mug Golf – If you want to save on some money but still want to practice your hole-in-one, then get yourself a mug and your golf clubs. Lay the mug down and get some practice in.

67. The Name Game – So you start drinking your alcohol of choice and are asked a question. You can’t stop drinking until you have a good answer.

71. Straight Face – Do whatever you can to make your opponent break their straight face.

There you have it, over 70 of the best man cave games  that will have you never wanting to leave. Hopefully, yours comes equipped with a bathroom. Otherwise, you are in for a smelly awakening.

Okay all jokes aside, I hope you enjoyed reading about all of these awesome games, and that you found a few that got you excited for spending some time in your new man cave. Until next time!