Inside: Celebrate Big with these 21st Birthday Games.

Bottoms up, it’s time to get wild! So you just turn 21? Now it’s time to plan one heck of a party to celebrate, no better time to go all out on a celebration. From house parties to bar crawls these 21st birthday games are full of fun and booze. We have the best idea for your big night, all you need to worry about are drinks, friends, food… Oh and don’t forget those Ubers!

You might be thinking what game is there to play at a 21st birthday party? The Answer, anything that requires shots. But seriously you can turn most games into a drinking game, but we have a few fun ideas. 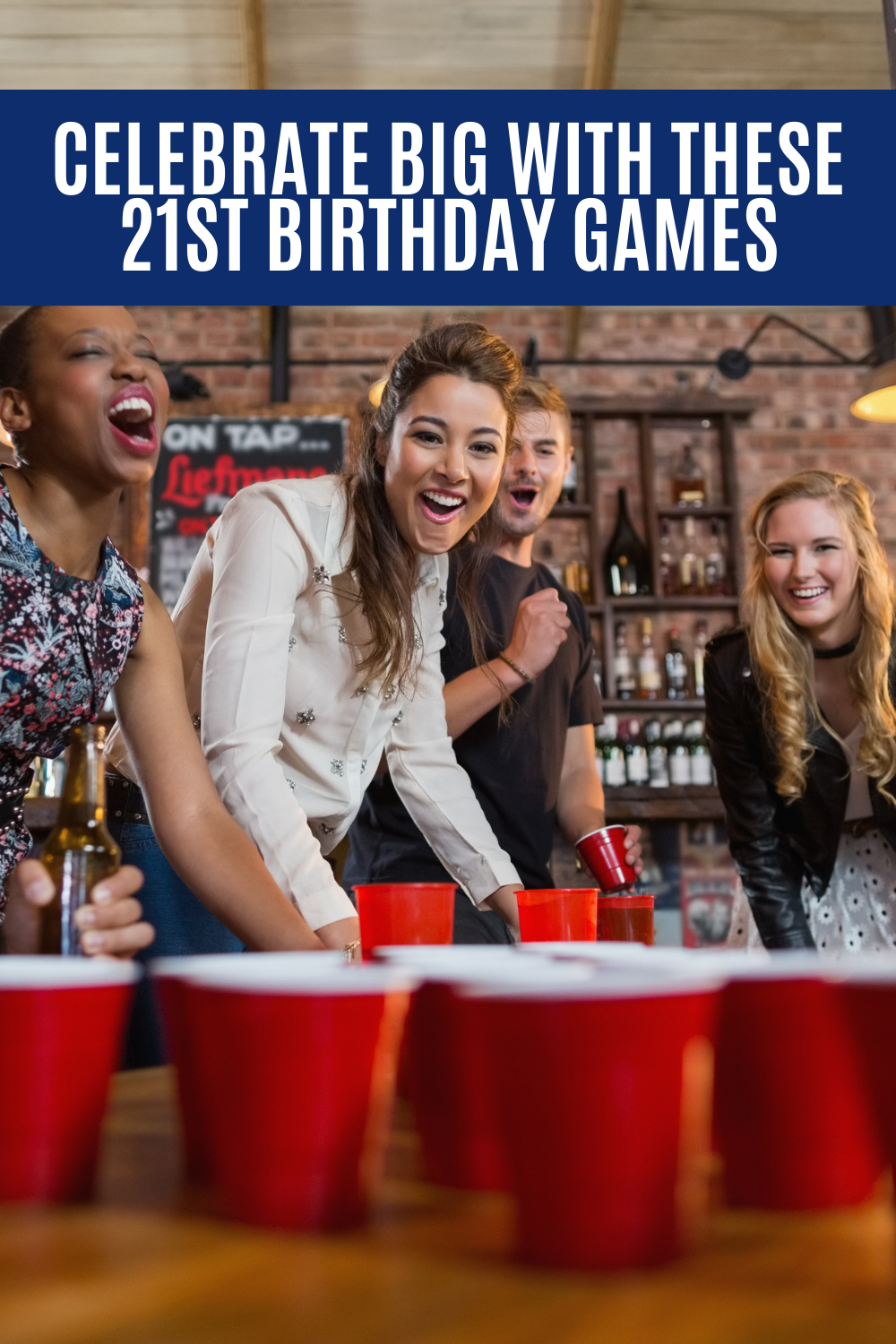 Flip Cup: A relay race game played with red plastic party cups. Teams are divided into 4 or 5, each with a half cup of beer, or 2 shots of hard liquor.

The game is a relay race and each person much drink the contents of their cup and flip the cup from the edge of the table with their fingers to the upside-down position on the table before the next member begins. The first team to finish wins.

Boxing: You need a stopwatch/clock, 2 birthday girl shot glasses, 4 people, 2 dice, and some beer to play this game.

Two people play this game head to head just like a boxing match, with the other 2 people helping them out being their “cornermen”. Sit at opposite sides of the table and each roll a die. Whoever scores lowest on the die takes that punch and drinks their shot. The cornerman fills the empty shot glass as quickly as they can and you roll again.

It’s a fast-paced game, to say the least. You play in 3-minute rounds with a 30-second rest in between rounds. We play until someone quits or pukes. You could play a limited number of rounds to prevent this though. 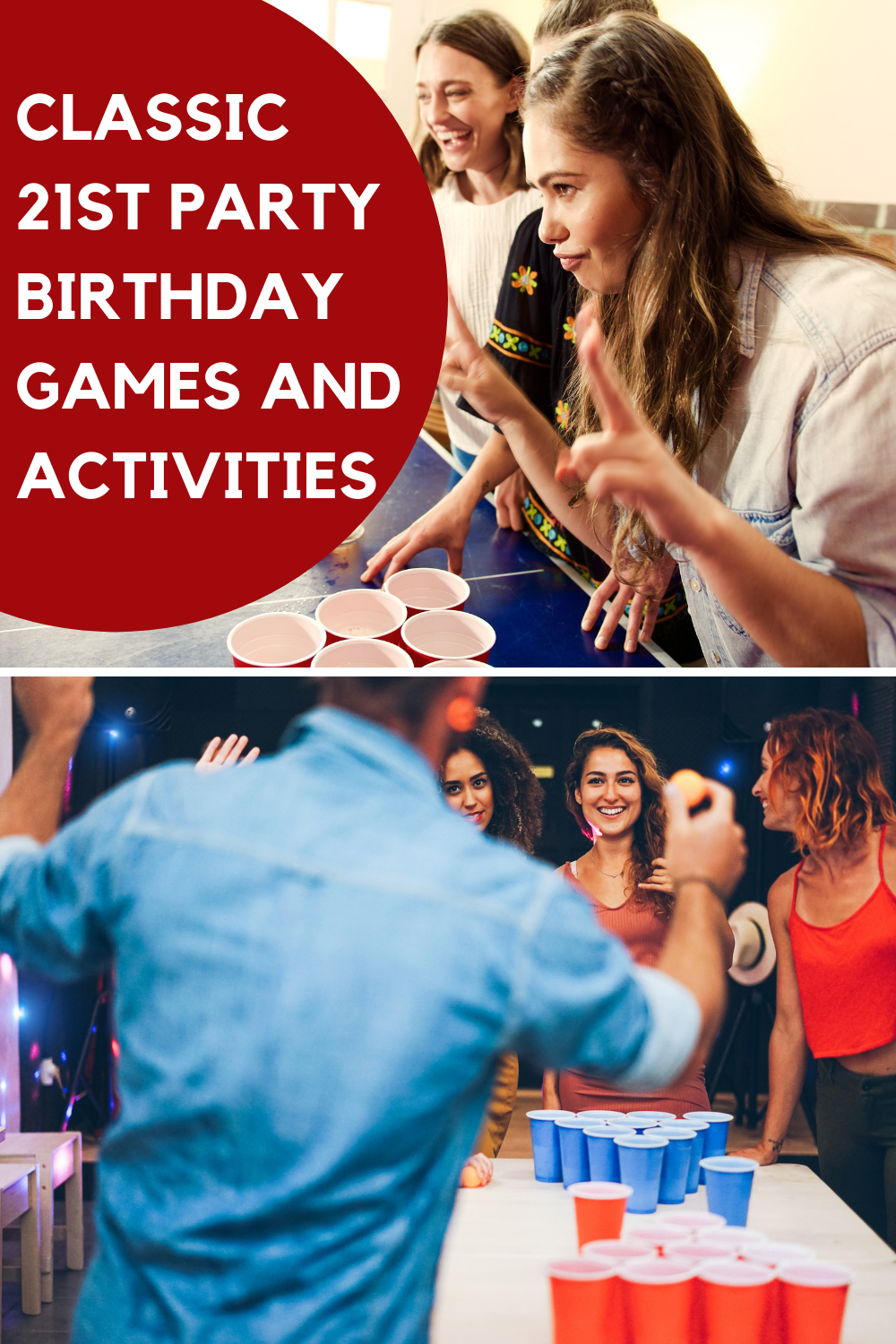 Beer Pong: You will need one ping-pong ball and 12 glasses of beer. Arrange six glasses of beer on either side of a table as if you were setting up bowling pins. Divide yourselves into two groups. Each group should sit opposite the other with 6 beers in front of them. As you take your turn, you must throw the ping-pong ball into the opposite team’s glasses. If it lands inside a glass, the opposing team must drink the beer immediately. Once done, rearrange the beers so they are all close to each other. The winning team is the team that manages to make the opposing team drink all their drinks. At the end of the game, the losing team must drink all remaining beer on the winning side.

At the start of the party, give each guest a lei or bead necklace to wear. Then explain to everyone that the goal is to amass as many leis and necklaces as they can, and the rule is that a player has to surrender their neckwear if they’re made to say the word “no.” Players who have lost their necklaces can continue to play and try to earn one off another player. At the end of a set time period, the player with the most necklaces is the winner. Let the fun and trickery begin!

This game can be played throughout the party, even while other games are in progress! All you really need is a couple of lightweight clothespins (plastic is recommended) and some drinks. One person (the pinner) gets a clothespin with the goal of secretly pinning it to someone else without them noticing. The pinner then steps away and counts to 10 out loud as each of the players frantically searches to see whether they’ve been pinned. If the pinned player finds the clothespin before the countdown is complete, the pinner must drink. If the pinned player can’t find the pin before the countdown is over, he or she must drink. Then the pinned player becomes the pinner and the game continues. 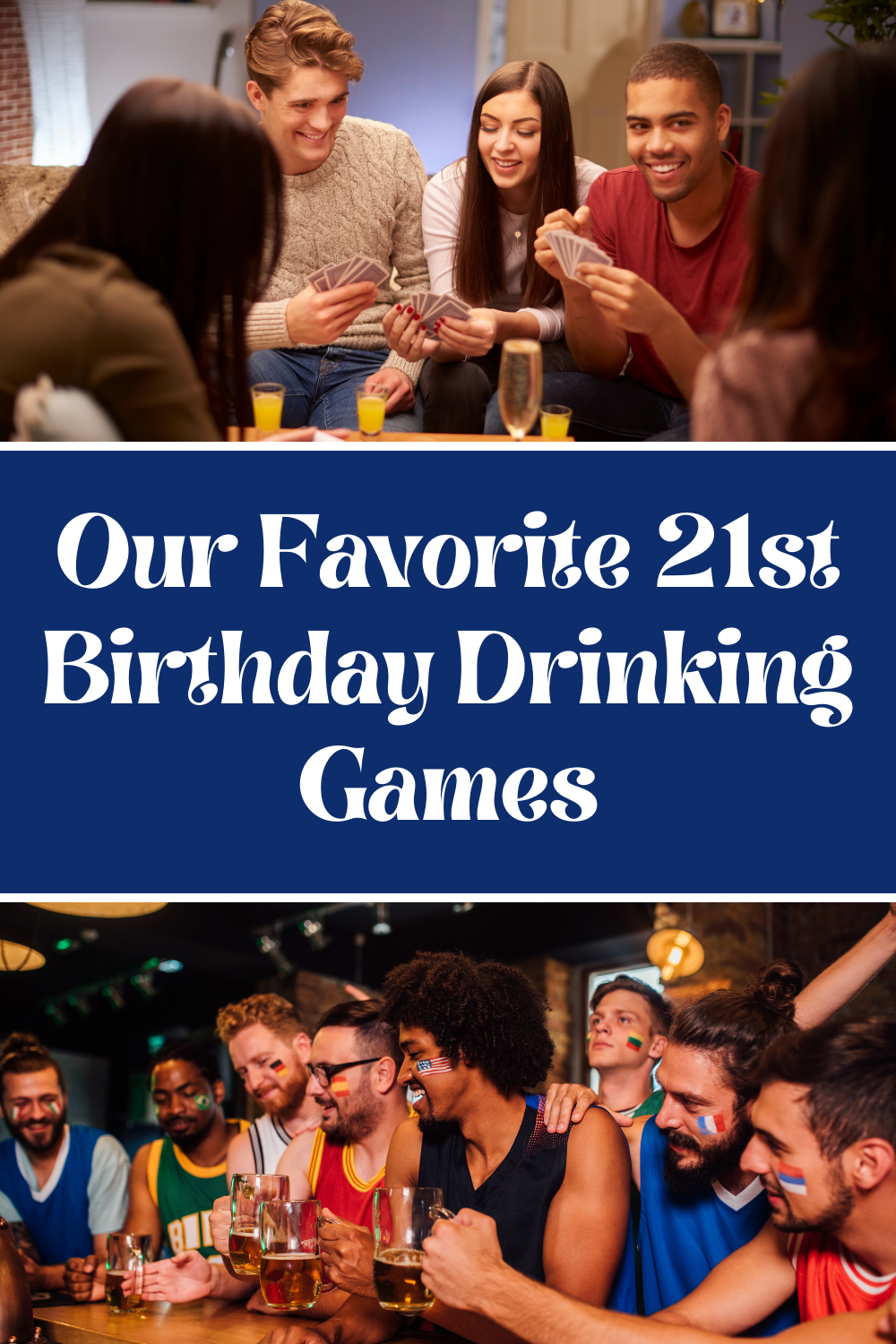 This game starts with someone saying the first and last name of a celebrity. The next person must use the first letter of the last name to come up with another celebrity name, and so on.

Here’s an example of how the game could start: The first player could say Bob Dylan. The next player could say Charlize Theron, and the game would continue on in this fashion as people continue to mention new celebrities. All it really requires is basic spelling capabilities and, hopefully, an abundance of pop culture knowledge. If someone names someone with the same letter at the beginning of their first and last names (example: Marilyn Monroe), the direction of play reverses. If a player can’t immediately think of a name, he or she must drink until they think of one. As you can probably imagine, quick thinking tends to get much more difficult as the party progresses!

Buzzed:  It’s simple — take turns drawing a card from the top of the deck. When it’s your turn, read the card out loud and either you or the group will drink based on the prompt on the card, depending on what it is. Lather, rinse, repeat. Designed for 3 to up to 20 players.

Never Have I Ever Girl Edition: Gather up your best gals because this 21 birthday party game idea for her is perfect for a girl’s night celebration.

Do or Drink: The Most Savage Drinking Game, Ever: Fans say that whoever made this game is a “total A-HOLE”, but they all agree it’s the best-drunk game night they’ve ever had – so much crazy laughter that people couldn’t speak and friends still talk about it weeks later 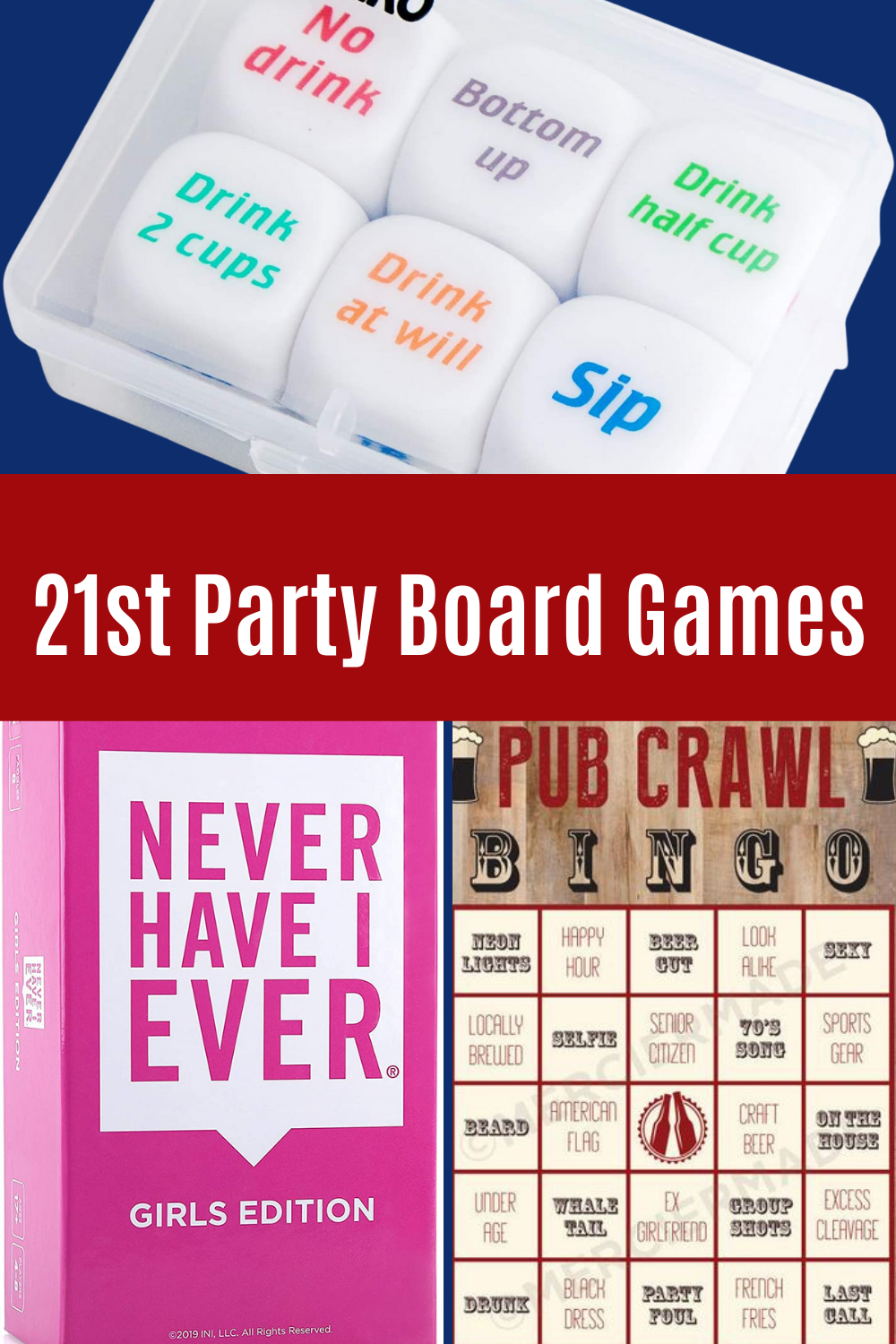 Drunk Jenga: New twist on a classic building blocks game, bring out this drinking game set at your next party or game night.

Pub Crawl Bingo: Is there a bingo game for a 21st birthday party? Oh yes! This pub crawl bingo game is one of our favorites.

Drinking Dice:  Roll the drinking dice and make your friends suffer the consequences in this game of chance, also helps you create some really special good memories.

Glass Roulette: Simply turn the wheel to see whose number is up. If your shot glass corresponds to the number played, empty the glass and spin it again.

If you love these fun games for a 21st birthday party, then check out a few more of our favorites.