I love a good party, nothing is better than good food, fun music, and great people. But there is always that little bit of an awkward time when everyone is just arriving and the party has quite kicked off! Don’t let those awkward silences or uncomfortable first meetings ruin your good time. Here are 43 of the most hilarious ice breaker games for parties! 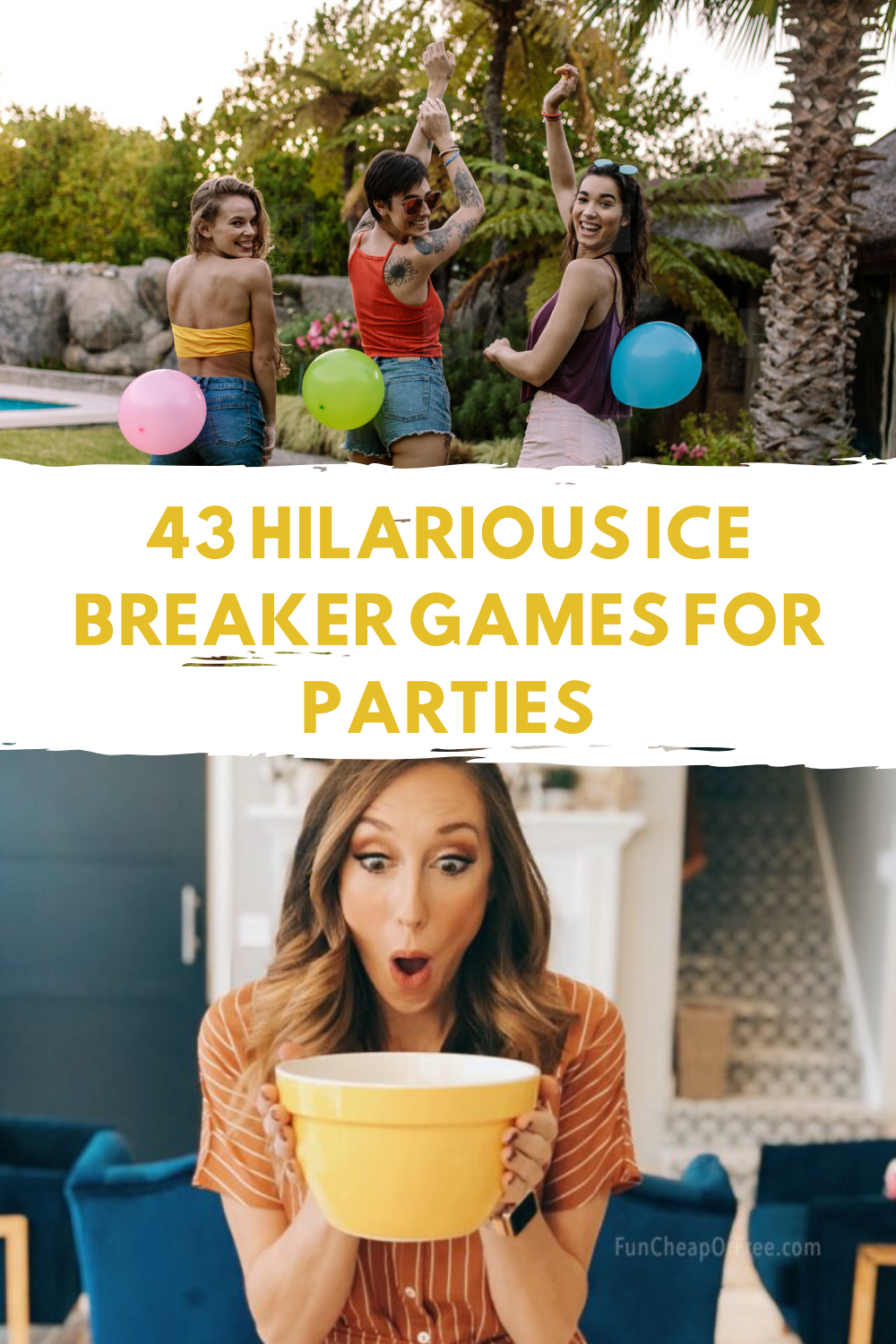 Toss & Talk: This is such a fun ice breaker game! All you need is an inflated ball or beach ball and a permanent marker. Write silly and interesting questions all around the ball. Then all you have to do is throw the ball to each person and whoever catches it has to answer the question that their right index finger lands on.

Would You Rather: If you really want to get to know someone ask them if they would rather have fingers for toes or toes for finger, am I right? Here is a list of some super funny would you rather questions!

Shoe Icebreaker: Have everyone leave one shoe by the door. Redistribute the shoes so everyone has one shoe that doesn’t belong to them. Then tell everyone to find the shoe’s owner and then strike up a 2-minute conversation, preferably about a subject other than shoes. 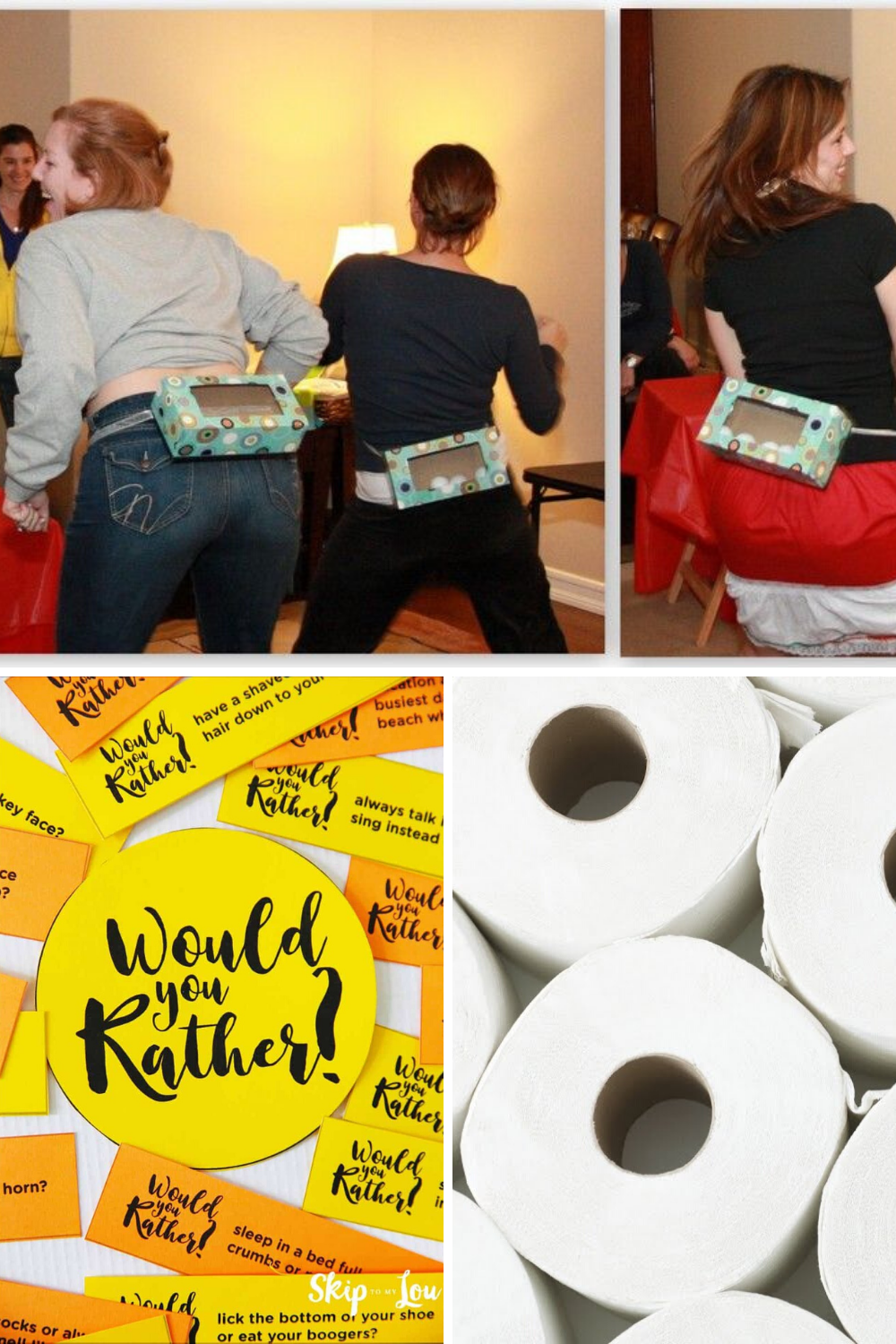 Fun Fact: Each person just has to say a random fun fact about themselves. There’s a catch- you can’t use the same fact twice! It gets more challenging and more fun the more often you do it.

Ping Pong Shake: This is THE FUNNIEST game ever! Team up and each person straps on an empty tissue box filled with ping pong ball. Each player has to shake what their mama gave them till their tissue box is empty!

Toilet Paper Icebreaker: To play, pass a roll of toilet paper around and have everyone rip off how much they would usually use. Everyone will probably think you’re crazy. When the toilet paper makes it all the way around the circle, have everyone count their squares. The number of squares each person took is the number of fun facts they have to reveal about themselves.

Desert Island: “You’ve been exiled to a deserted island for a year. In addition to the essentials, you may take one piece of music, one book and one luxury item you can carry with you. What would you take and why?’ Each person will go around and share their answers.

Two Truths & One Lie: Each person comes up with two truths about themselves and one lie. The object of the game is for everyone to guess which is the lie.

Cookie Face: I love this hilarious ice breaker game for parties. This game is a race, each person grabs a cookie and sets it on their forehead. Using only their face muscles they have to work that cookie all the way to their mouth. The first one to get the cookie to their mouth wins!

The Bowl Game: This is the most hilarious ice breaker game for parties. It is totally one of the best games and one of my all-time favorites. 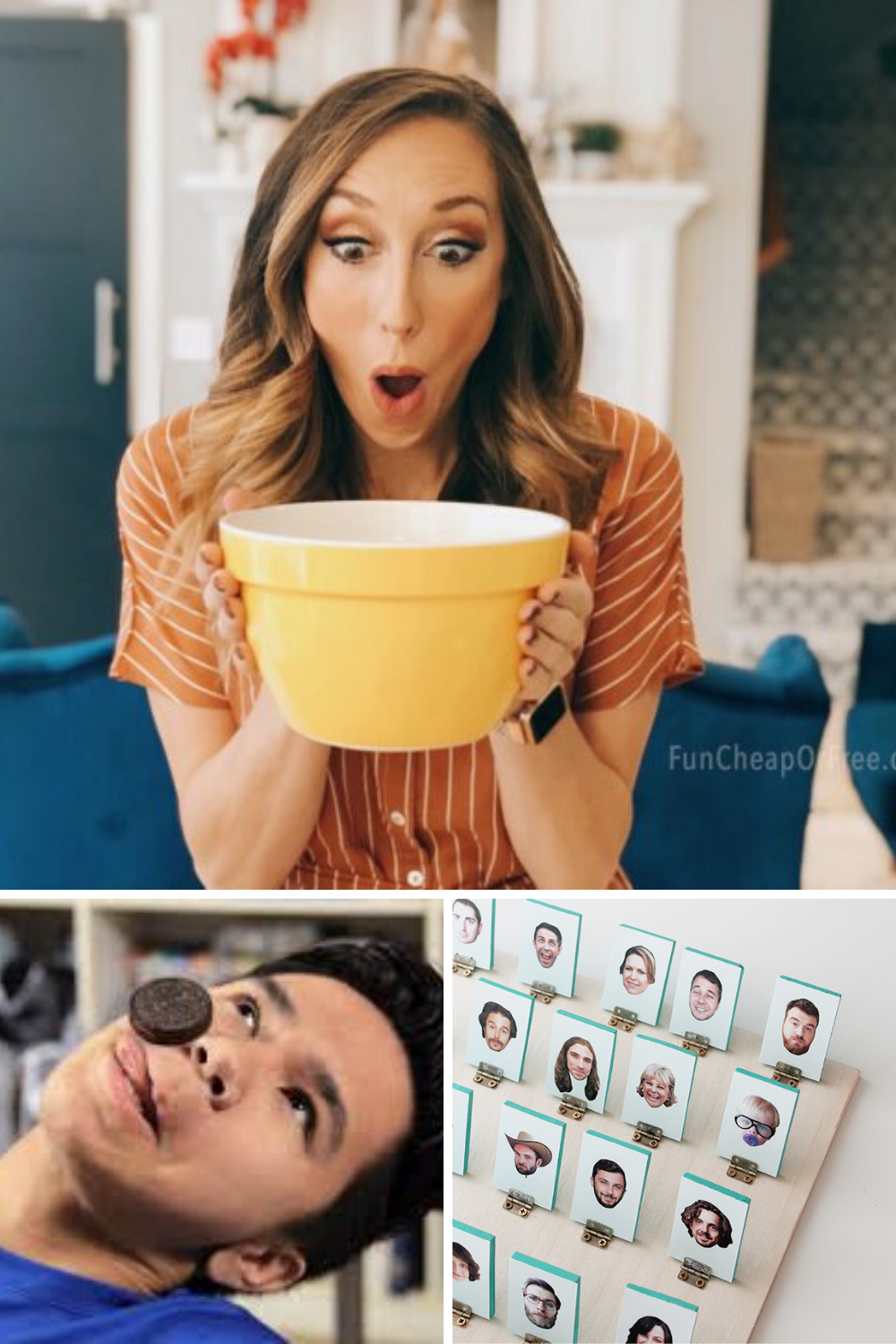 Charades: I love this classic game. Here is a list of charade items that make for a pretty hilarious ice breaker game for parties!

What’s My Name: Write down the names of well-known public figures on pieces of paper, then stick them on the backs of each person. Everyone will need to mingle and ask each other questions to figure out who they are.

DIY Guess Who: This is a hilarious ice breaker game for parties, it really makes it where everyone gets to know each other really quick!

A Friendly Debate: Start by asking a harmless question that has people choose a side. For example, “Which food is better: Pizza or Tacos?” or “Would you rather go on a hike or go see a movie?” Have everyone physically divide into sides—pro pizza to the right; pro taco to the left. Let all the like-minded people discuss the pros of their side then have a discussion as to why they think their side is better!

Belly Balloon Break: This hilarious ice breaker game for parties is best played with couples! The goal is to try to break a blown up balloon between two bellies. So, blow up a couple of balloons and set the time and get popping!

Rose, Bud, Thorn: Each teen takes turns to share their ‘rose, bud, thorn’ for the week. Rose is something good, Thorn is something bad, Bud is something they’re looking forward to or are hopeful for.
Popcorn: This isn’t a “talking” one, but it’s sure to get you laughing and making memories! Have teens pair up and stand opposite each other a few steps apart. Give half of the students some popcorn to throw at their partner, who then has to try to catch it in their mouth.
Balloon Pop: Blow up a bunch of balloons and fill them with fun questions. Each person has pop the balloon without their hands and then answer the question! It is so hilarious to see each person pop the balloons, especially without using hands!
Human Ring Toss: This is such a hilarious ice breaker game for summer parties! 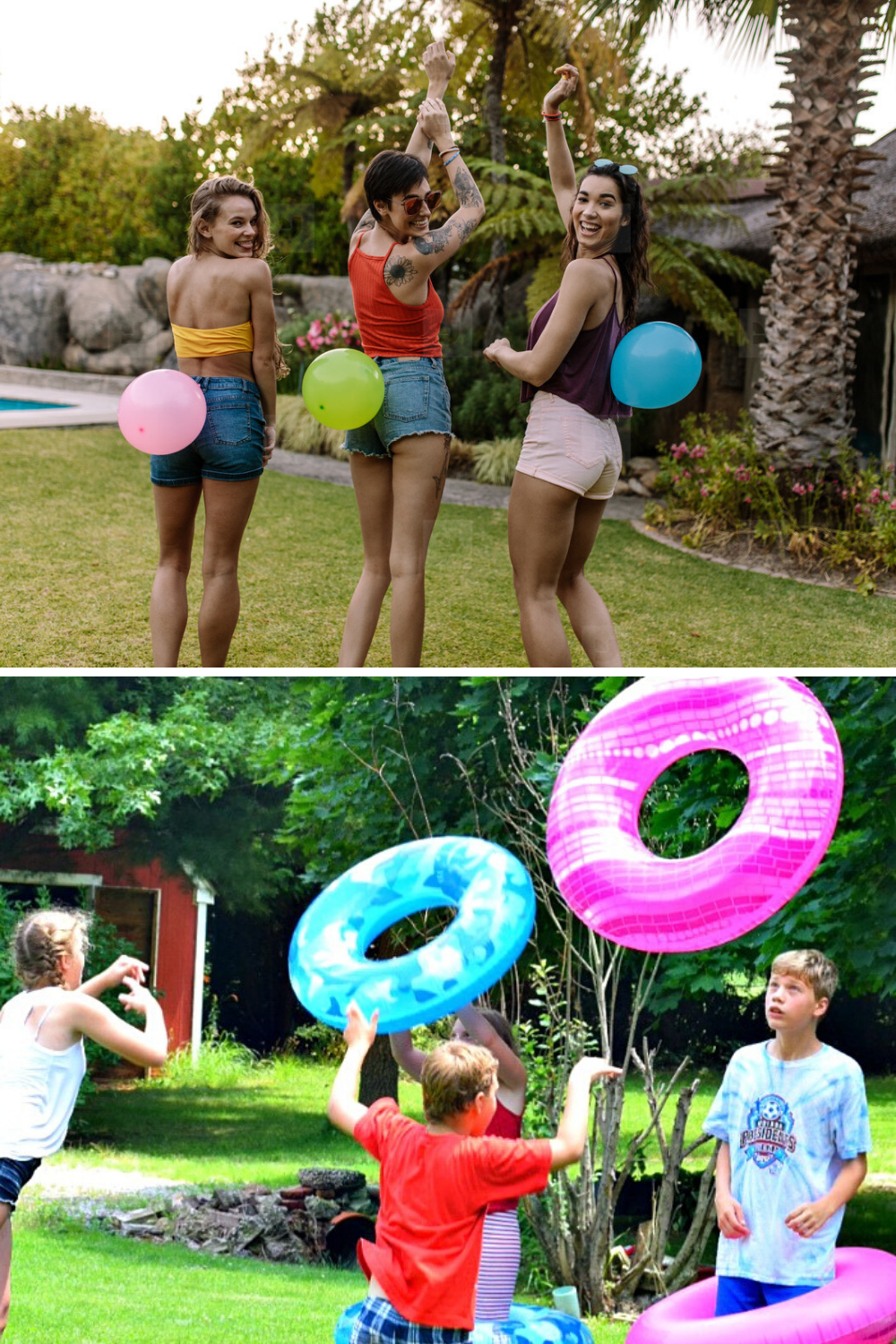 Jenga Questions: Who doesn’t love a good game of Jenga? Write thoughtful questions on each block to open up conversations – whether that’s asking about someone’s best memory or their favorite ice cream flavor. As each person pulls a block, they answer the question written on it.
Salt and Pepper: Come up with pairs of things like salt and pepper, sun and moon, etc. Separate the pairs and write only one of them per piece of paper, then tape one on the back of each person. Everyone must walk around asking yes or no questions to find out what word they have. The next step is to find their pair, then sit down together to learn three facts about each other.
Dice Ice Breaker: This game is a lot like the M&M ice breaker game listed below. Whichever number the dice lands on, you have to answer a question associated with that number. You can change the questions according to the party or group of people.
Find 10 Thing in Common: Everyone is assigned to groups and must find ten things they have in common with every other person in the group.

Group Knot: To get tangled with this fun ice breaker activity, gather your entire group and form a circle. Everyone should be facing inwards with their hands placed in the middle. Once this is done, everyone should grasp or hold a random hand. As soon as everyone is appropriately tangled, the game starts when the group has to start to disentangle this jumble of limbs. This is a totally hilarious kids ice breaker games for parties.
Donut String: This game is SO funny! Watching all the kids trying to eat up those donuts is so fun to watch!
Fruit Roll-up Game: Kids LOVE this game! To pay this game you take a fruit roll-up, hang it out of your mouth and without using your hands you have to eat the fruit roll-up as fast as you can!
Clump: To start this hilarious ice breaker game for parties, get everyone to spread out. The group should be as widely spread as possible, and nobody should be able to touch another person, even with their arms fully extended. Choose a leader who will call out “clump of” (random number). For example, if the leader called out “clump of four” then everyone will have to scramble to get into groups or clumps of four. The people left out of the clumps are out. The game is finished when there are only two people left and this duo wins the round.

Candy Tape Ball: I love this game! The point of the game is to unwrap your candy ball before the next persons turn. Here is a full tutorial on how to make the ball and how to play the game!
Favorite Knock-Knock: Have everyone tell their favorite knock-knock joke.
Shaving Cream Cap: This is a hilarious ice breaker game for parties. One kid has a shower cap on that is covered in shaving cream. Another kid has a bowl full of cheese puffs. With 30 seconds on the clock, they see how many cheese puffs they can throw and stick to the shower cap! The goal is to get more than the other team!
Water Balloon Toss: Pair up and start close together and toss the water balloon back and forth. Then move further and further apart till there is only one team left!

I love playing this M&M ice breaker game. All you need is a small package of M&M’s and this printable!

Each person gets a pack of M&M’s and one by one they grab an M&M from the package. When it’s their turn they have to answer the question that correlates to the color of the M&M.

Blue: Something you can’t live without. Brown: Something about yesterday.

The fun thing about this game is you can change the questions to whatever you want!

Table Topics: This is such a great game full of different conversation starter subjects.
Choices: Each card presents a delightful dilemma, sometimes unusual, always challenging to spark conversation!
Conversation Cubes: This conversation dice is such a fun way to break the ice in a group. Each person rolls the dice and must answer the question that the dice lands on! 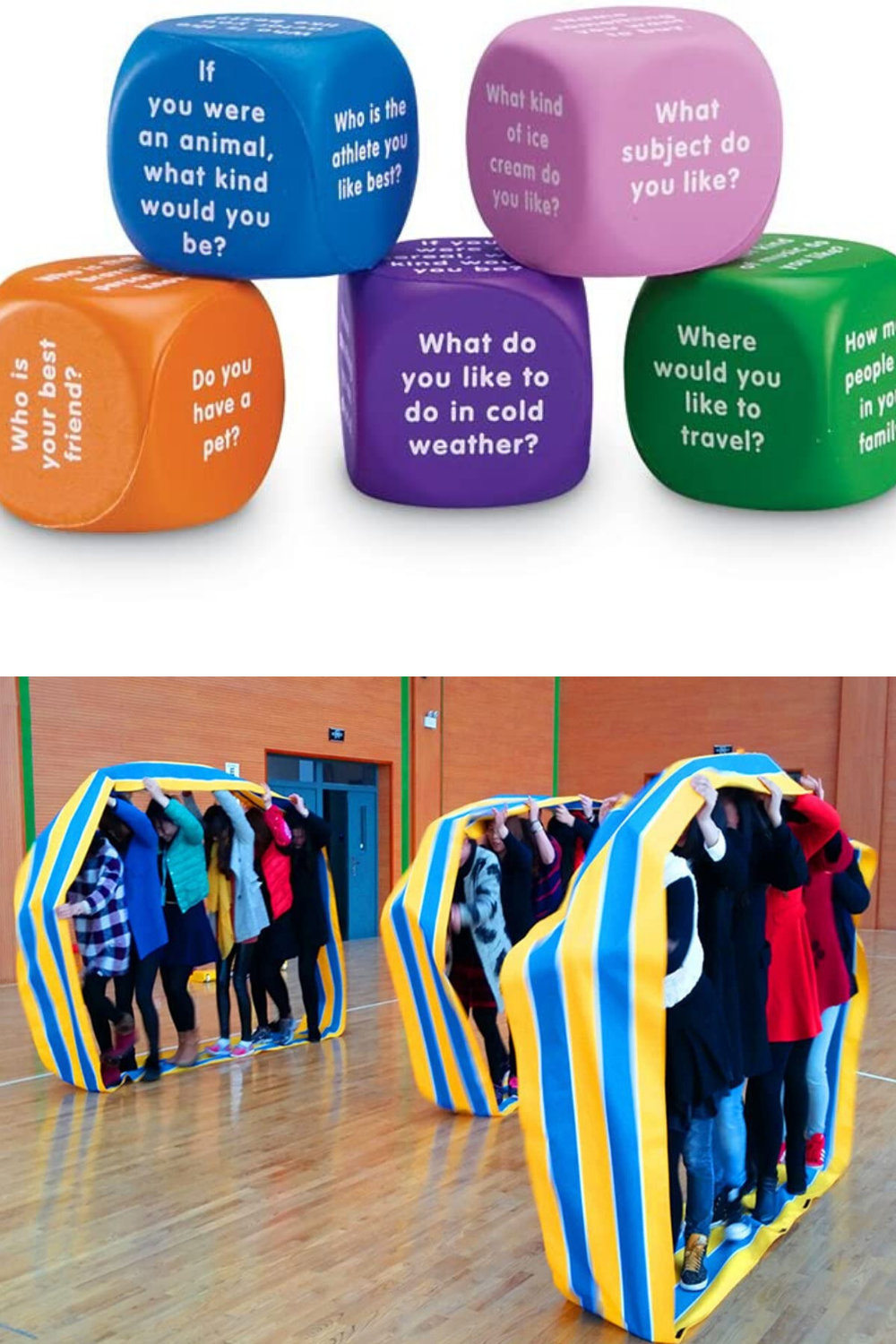