Inside: The Best 6 Player Board Games for Game Night.

When I’ve got a big group sometimes I want to play a big game. An epic all-night event type of game. A game where I plan ahead and include dinner plans for the evening. I mean after all they do say go big or go home… right?

So why not make it one epic game night!

From classics to competitive cooperative games, below are some great epic 6 player board games for your next game night. 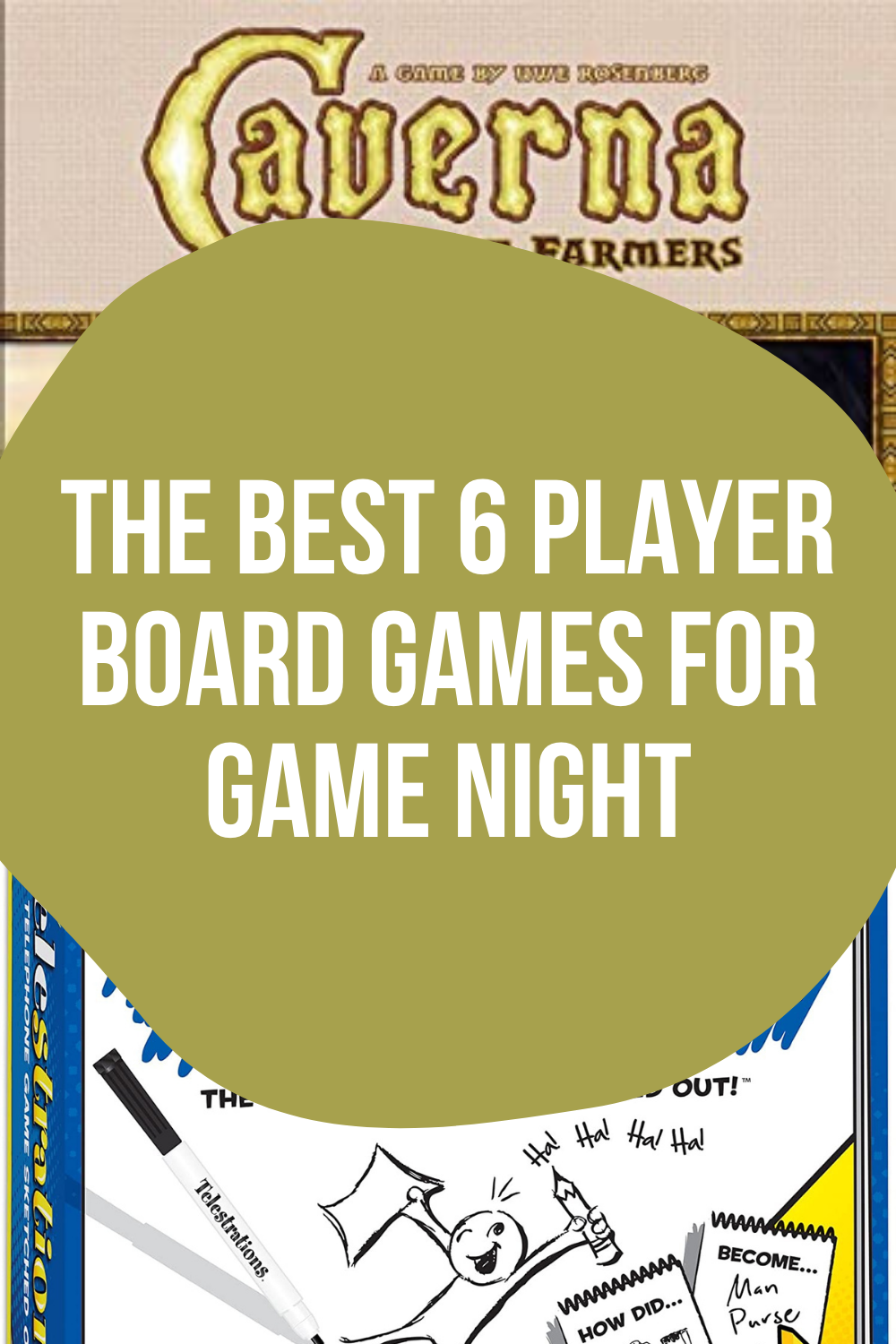 Battlestar Galactica: In this game, the crew is trying to get Galactica to Cobol before running out of any of four necessary resources: fuel, food, population, or morale. The trick is that some of the players are actually Cylons who are trying to prevent this journey from happening.

Caverna: The Cave Farmers: In this brilliant update to Agricola, Uwe Rosenberg hopes to catch people’s interest by swapping it from raising cows and planting fields to playing dwarves raise cows, planting fields, and mining metals. It worked for me. Besides having what I think is a much cooler and more engaging theme Carverna plays up to seven players, whereas Agricola only goes up to five. There are a number of changes to the basic gameplay that I think make Caverna the tighter and more rewarding game of the two. The only problem is that there can be a lot of downtime once you get up to a high player count like six. 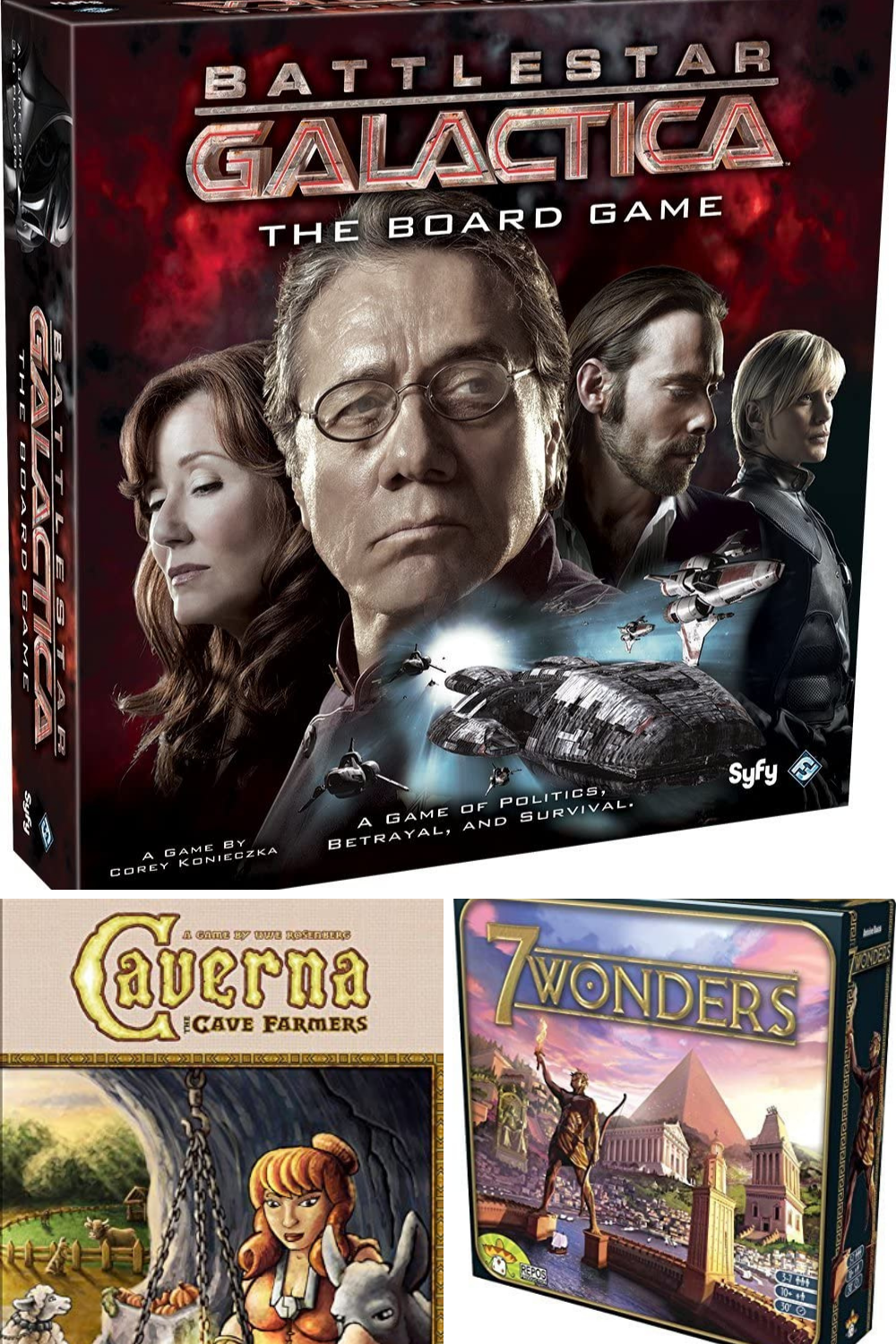 7 Wonders: This is the game that gets most recommended at public play events I’m at when we hit a player count of six or seven people. 7 Wonders can be pretty quick to teach and really fast to play once you have a group that knows the game.

Flash Point Fire Rescue: It’s very rare to find a cooperative game that plays at high player count like six players. All of the popular Pandemic games top out at five players and you only get to five with expansions. Flash Point plays six players right out of the box. In addition, I think Flash Point is a better cooperative game experience. There is just something about fighting fires and saving a kitty, that is more impactful than removing virus cubes from aboard.

Colt Express: It’s set in the old west and each player controls a train robber. Players use cards to move around the train, avoid the warden, and grab (or steal) loot from the other payers. Whoever has the most loot when the train comes into the station wins. Different event cards make it hard to predict what other players are doing when things like tunnels have players playing their cards face down. 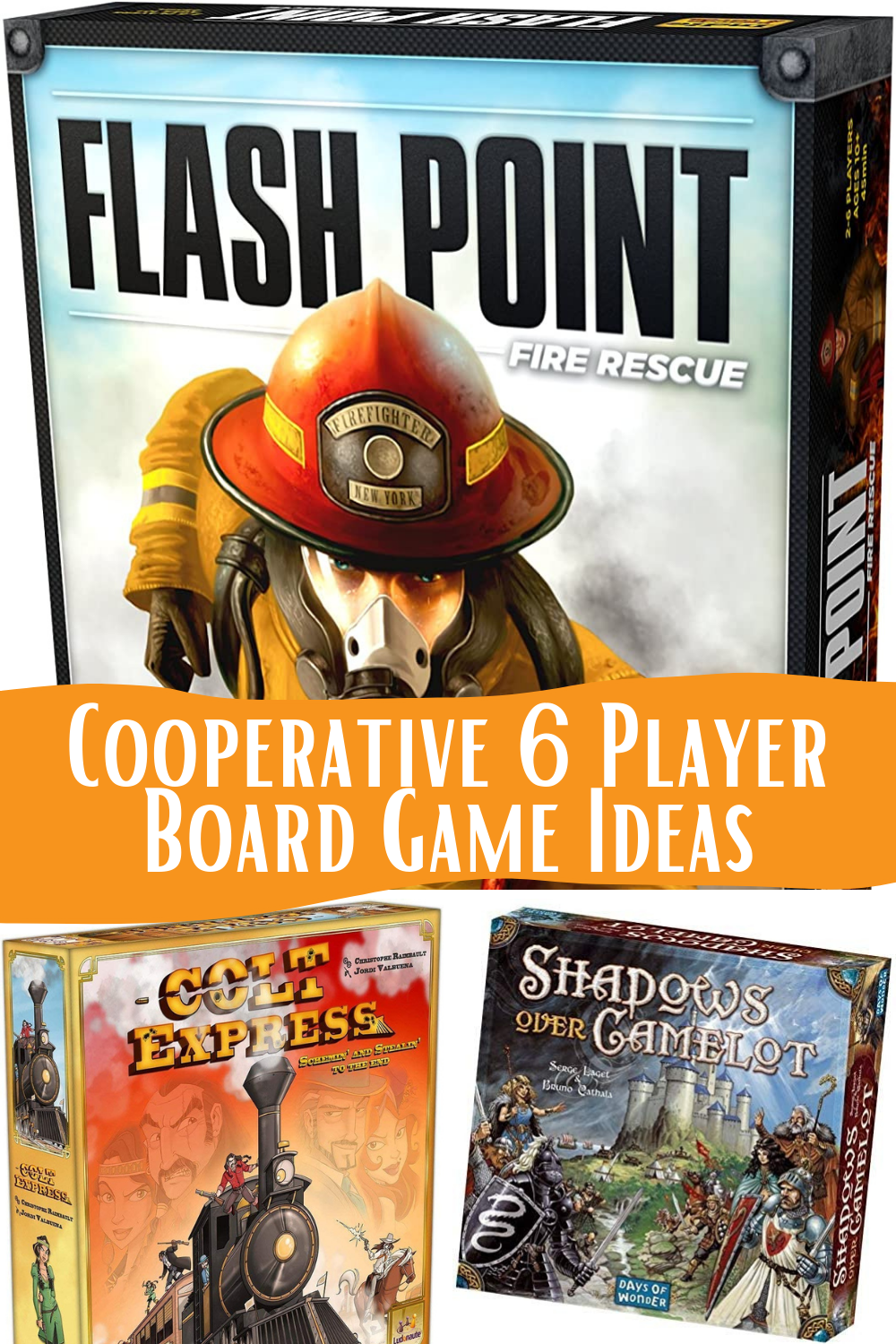 Shadows Over Camelot: Each player takes on the role of a Knight of the Round Table and must work to defend Camelot and complete various quests like the search for the Holy Grail. The Interesting bit, in this semi-cooperative game, is that one of the nights might be a traitor working for the forces of darkness. One great aspect of this game is that players can jump in and out after the game has started with little to no impact on the game.

Classic Board Games for 6 Players

Catan (with the 5-6 player Extension) – Back when I was just getting back into tabletop gaming, we used to get together and play Catan every Saturday. Often those groups consisted of up to six players and over time I learned that I actually preferred Catan with the five to six player extension. The big change, besides a higher player count, that this expansion offers is a special building phase after trading each turn, in which people can spend resources to put stuff on the map, even if it isn’t their turn.

Codenames: For this game, you split the group of six into two teams of three, with one code giver and two guessers. To me, six is actually pretty much the bare minimum number of players you need to play a good game of Codenames. This is one of those rare games that I didn’t like at first but that grew on me, so even if you usually prefer heavier games or don’t like party games I recommend giving Codenames a chance. It won me over and may win you over as well. 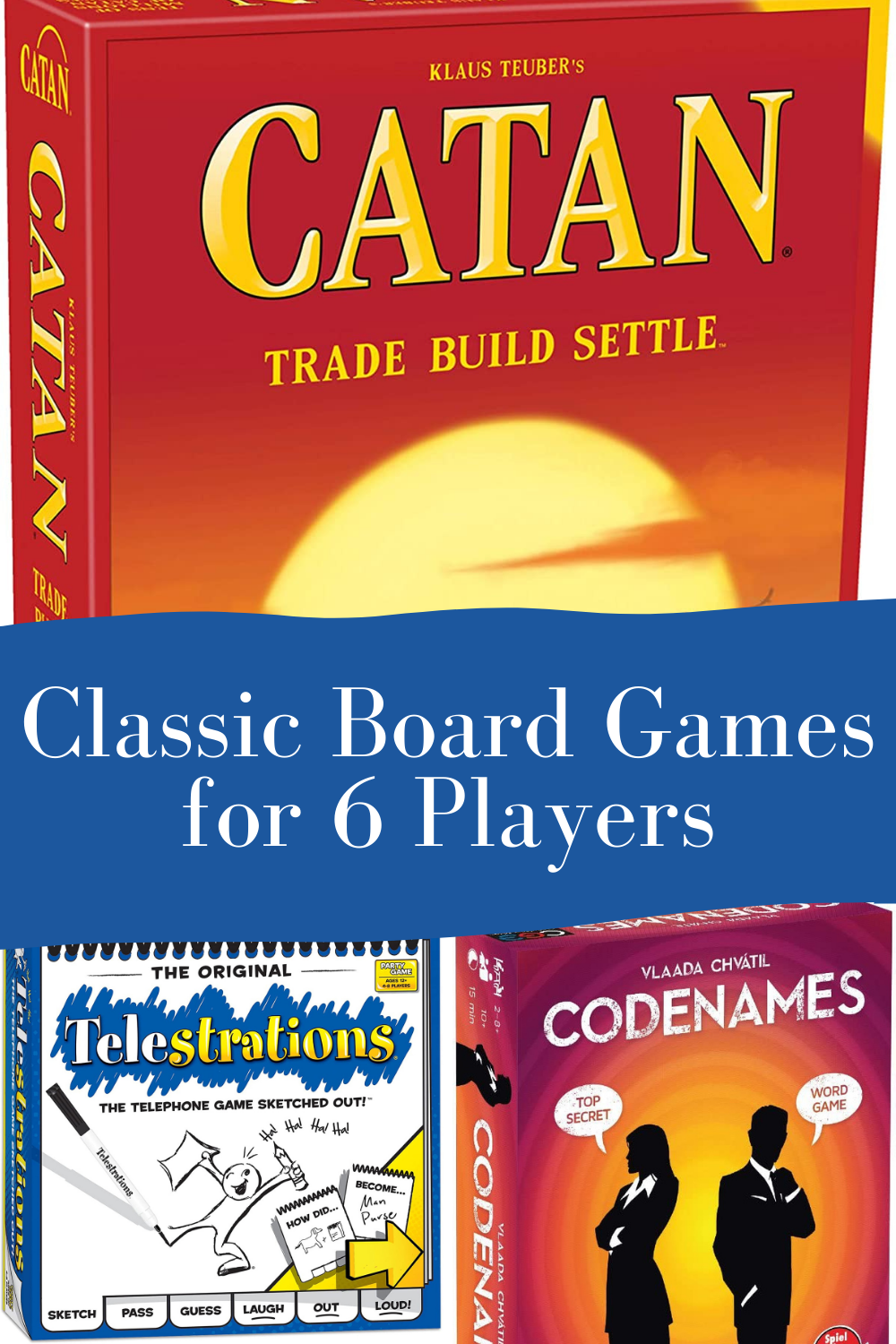 Telestrations: This is a hilarious party game based on the parlor game Eat Poop You Cat. You get a random clue which you have to try to draw in a book. You pass your book to the left and then look at the drawing you were handed. Take that drawing and write down what you think it represents then pass that book. Next, you get a word to draw, and so on until you get your book back. In turn, players flip through their books and see where things went. It’s rare that you end up at the same word in the end that you started with.

A Few More of Our Favorites

Here are a few more of our favorite 6 player board games!

Skull: This is a neat betting, push your luck, game played using coasters. You create a stack of coasters comprising of one skull and a number of flowers. Then players take turns betting on how many coasters they can flip over, before revealing a skull.

Concept: This is my favorite clue guessing party game. With a group of six, you can split into two teams or just do what we do where the person who guesses the correct concept gets to be the person giving out hints for the next round. Don’t bother scoring, just play until you aren’t having fun anymore. I know I recommend this game a lot but it’s for a good reason. This is one of the few games I can get my non-gaming relatives to play. 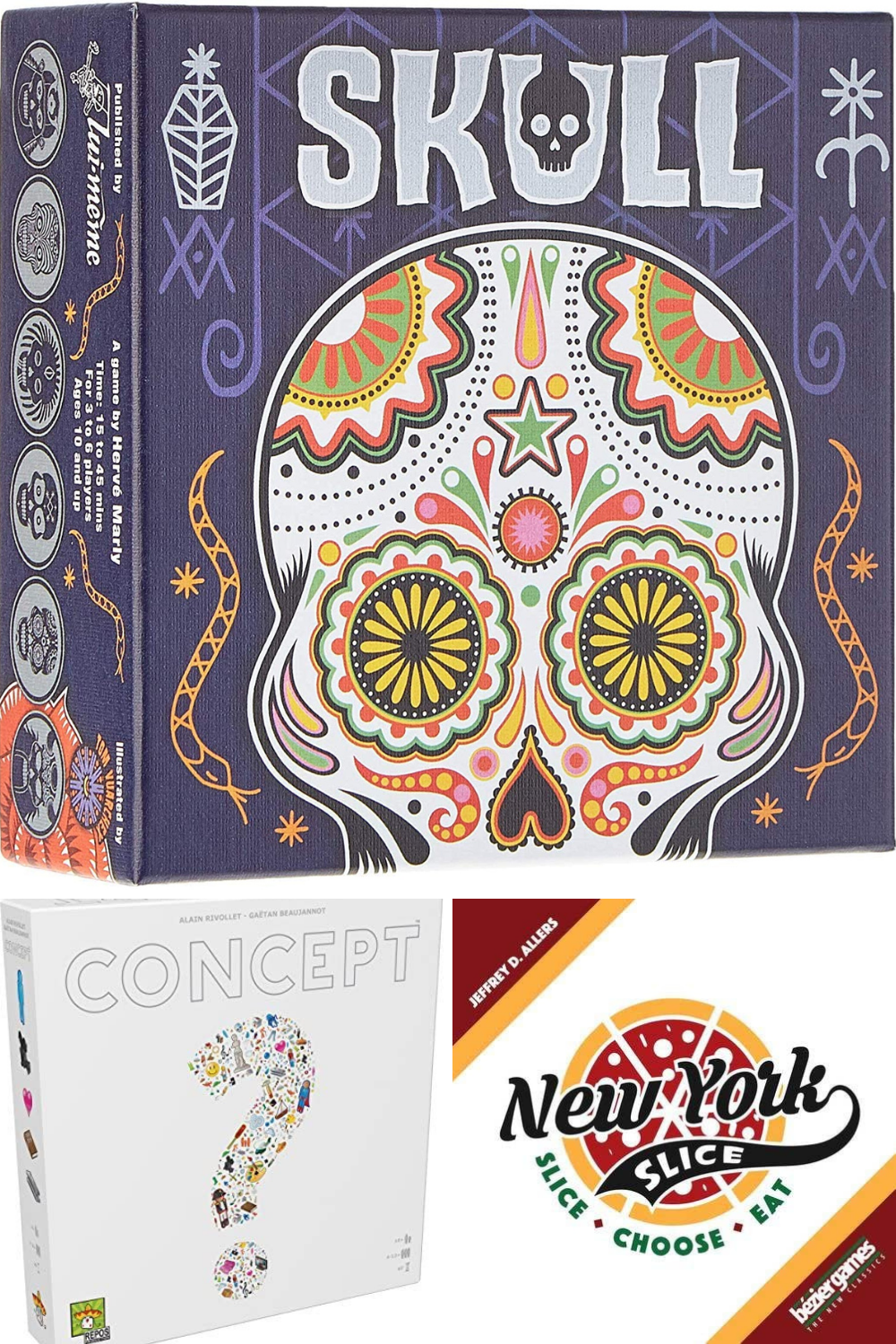 New York Slice: In this surprisingly thematic game, the lead player builds a pizza and then has to divide that pizza up into a number of portions based on the number of players. Each player chooses their own portion consisting of a set of slices, with the person doing the splitting getting the last pick. Slices come in different types and are worth points based on how many of each slice there are in the game. At the end of the game, only the players who have collected the most of each type of slice will score points, with some bonuses and penalties for pepperoni and anchovies.  This one is always a big hit but does have the problem of making everyone crave pizza after playing.