Inside: The Ultimate guide to playing the twilight drinking game

If you, like the rest of the internet, have rekindled your spark for the cheesiest of teenage vampire/wolf drama…then do I have the game for you? But before that, let’s go back to the cringy world of 2008 when the movie first came out.

Now, back then, we were so heavily invested in this story, of who Bella would choose and how it would turn out, mostly because of the insane amount of hormones raging through our bodies.

Of course, a Wolf, Human, and Vampire love triangle left us all breathless. 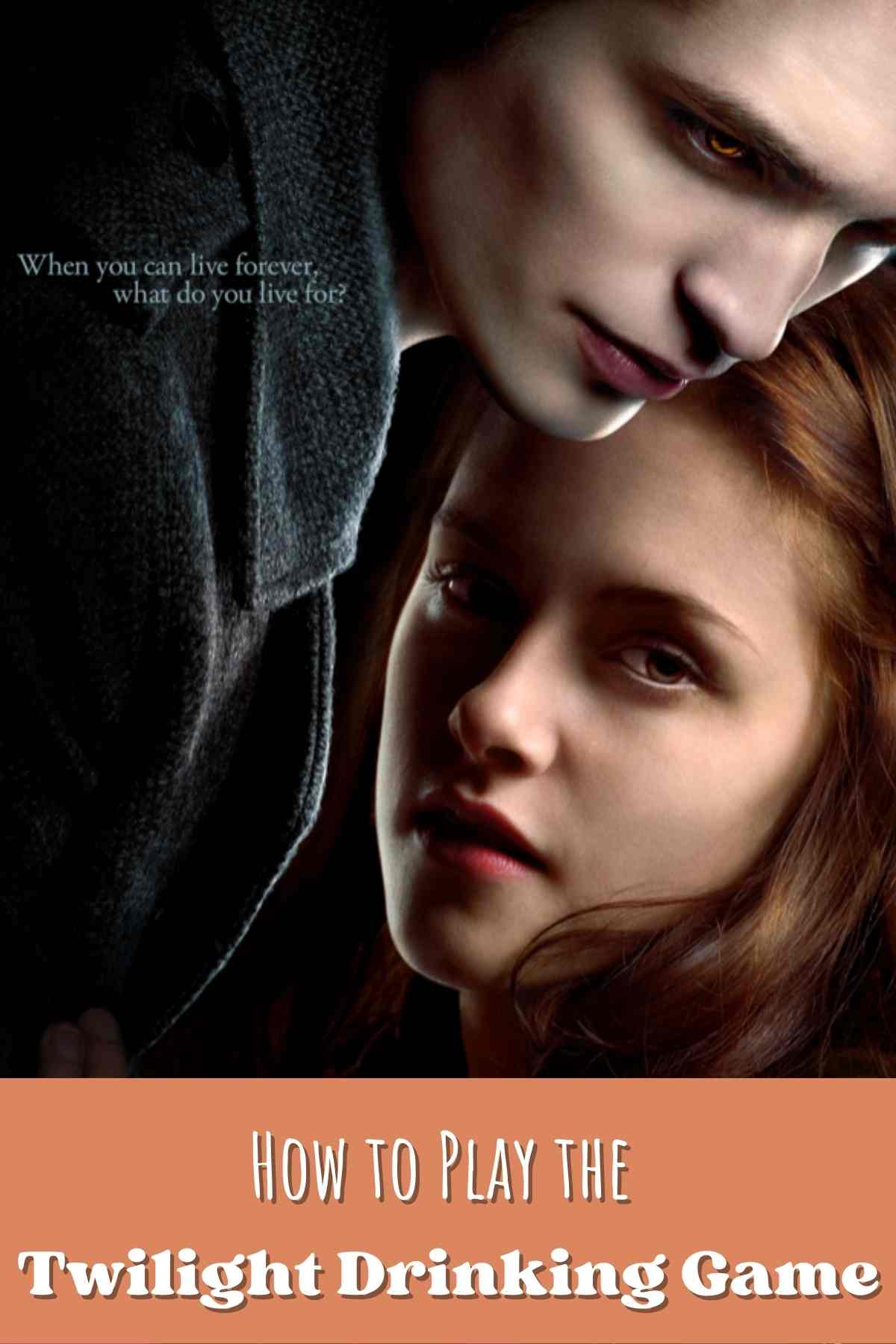 But that was over ten years ago now, and for a while, those movies faded into oblivion with the rest of the pop culture from that era. But, thanks to the internet, these movies are back. Since so much time has passed, we are all watching it with older nostalgic eyes.

And since we are older, I thought we could revamp the way we watch it. Let’s turn twilight into a drinking game! But first, let’s go over what Twilight is for those of you who don’t know.

The twilight franchise started as a book series written by Stephanie Meyer. The original series consisted of 4 books that were made into five movies, and they took the world by storm.

In these books, a girl named Bella Swan moves in with her Dad, who lives in the rainy and perpetually gloomy town of Forks, Washington. As she learns to fit in at her new High School, she meets Edward Cullin. Edward, as Bella was told, never dates and is quite the recluse…a hot recluse.

Bella also catches up with childhood friend Jacob Black around this time.

To keep it short, this science fiction love story follows those three as they have quite the love triangle; Bella loves Edward, Jacob loves Bella…it gets messy. Hence why I think this movie is PERFECT for a drinking game.

So let’s get into it. 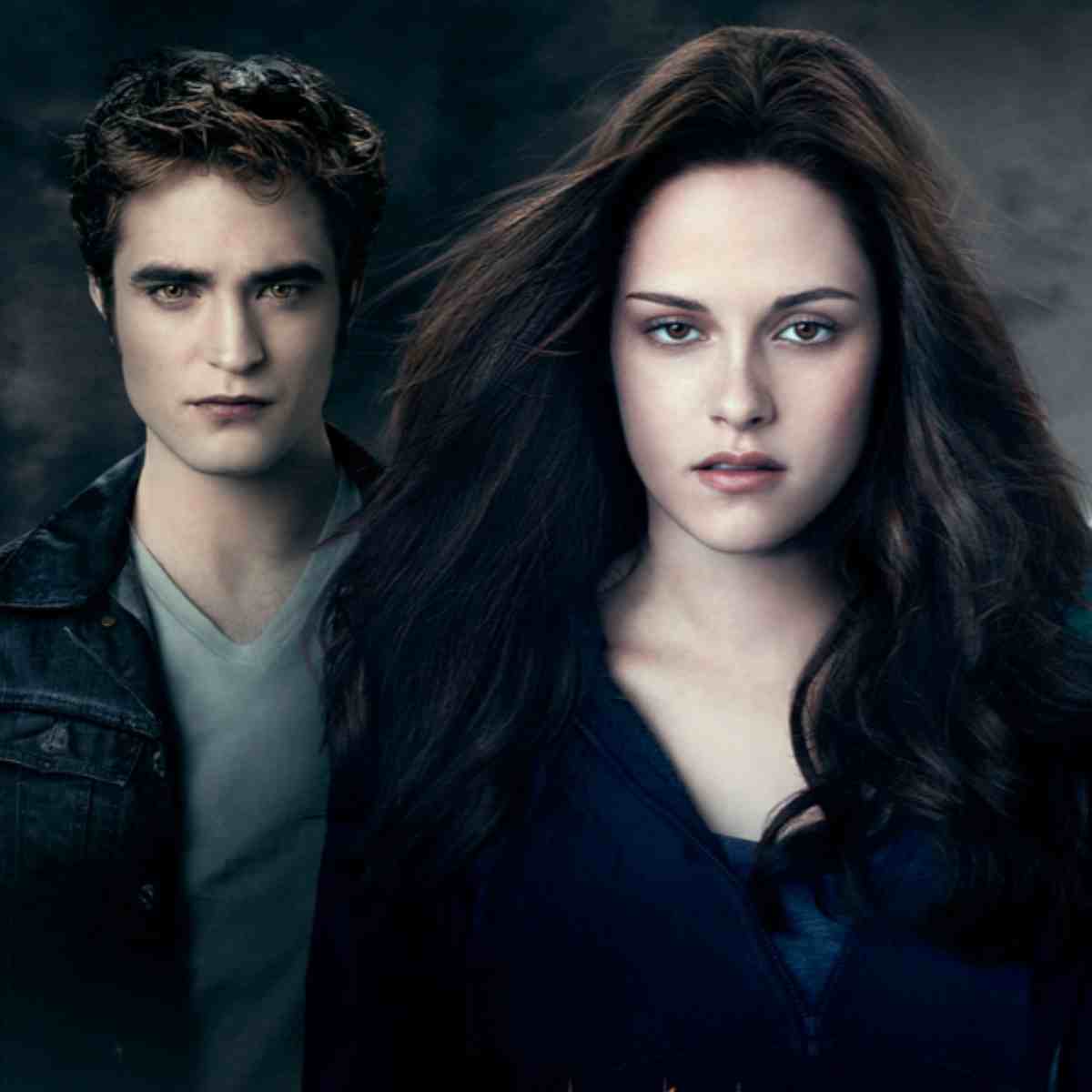 What is the Twilight Drinking Game?

The twilight drinking game is a way to revamp the movies from our childhood and make them more fun for adults. This can be done in several ways, but today we are going to focus on the best. Essentially, for this game, you take iconic moments from the movie and make their cues. Every time you see them on the screen, you have to take a drink, shot, etc.

So if this sounds like something you would love to do, then keep on reading. We go over the rules and general how-to-play information next.

How to Play the Twilight Drinking Game?

So as I said above, there are a few ways to play this game. The general rules are that you and your group must come up with certain cues in the movie. Once you agree on the cues, you have to assign what I like to call ‘dosage’ to it. You have to decide whether it’s for a drink, a chug, or a shot. If you want to spice it up, you can add another call to action as well.

Everyone starts off the movie by chugging one mixed drink or beer.

Then you all settle in and push play. Every time a cue comes on, call it out, and everyone has to drink. The last one standing(or crying) at the end of the movie wins.

It’s pretty simple…because it has to be. Do you know how hard it is to follow instructions after a few shots? It’s impossible.

Now for the fun part. Take a look at this list of cues! 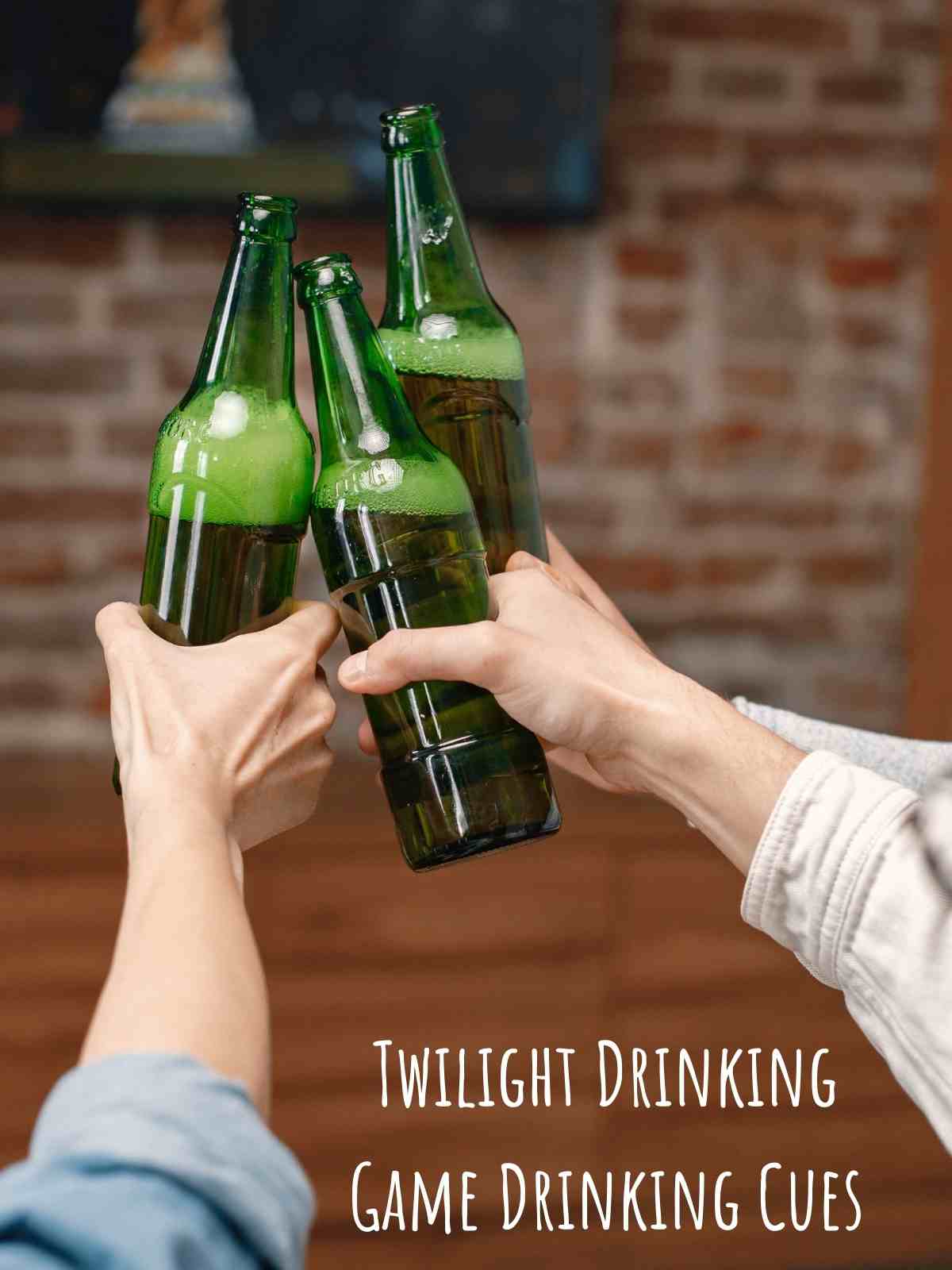 Here we have a list of some of the best things you can drink during the Twilight movies. You should have a general drunkness goal in mind here. You can choose some of the more frequent calls if you don’t mind getting absolutely blitzed. But if you want to get through the movie standing, choose the more sporadic moments. Just some food for thought. Or rather, some booze for thought?

2. Drink when Charlie does that awkward play fighting with Billy – This scene is one of the funniest to me, and for no reason. It is just pure dad energy, and I love it.

3. Take a shot when Bella sees Edward for the first time – You have to…it’s a momentous occasion of course.

4. Drink every time Bella Stutters – Yeah…she does this a lot, so use caution with this one.

5. Chug your drink when Edward stops the car from hitting Bella

6. Take a drink when Jacob says, “Bella where the hell have you been Loca?” – Iconic…what can I say?

7. Take a drink when Alice is being a sweet weirdo – This is pretty often in the first movie. We love her, though.

8. Drink when Bella plays with her hair – Kristen Stewart really embodied the ‘Teen in love’ look with her movements.

9. Drink whenever vampires run fast – This one will get funnier as the night goes on.

10. Drink when the Cheerleader is jealous of Bella – This is a pretty solid theme throughout the movies between Anna Kendrick and Bella.

11. Drink when Edward Sparkles – Yeah…the only caution I will tell you with this one is to be careful not to choke on your drink because you are holding down a laugh.

12. Take a shot when they play vampire Baseball – Vampire baseball was lit. Not going to lie. 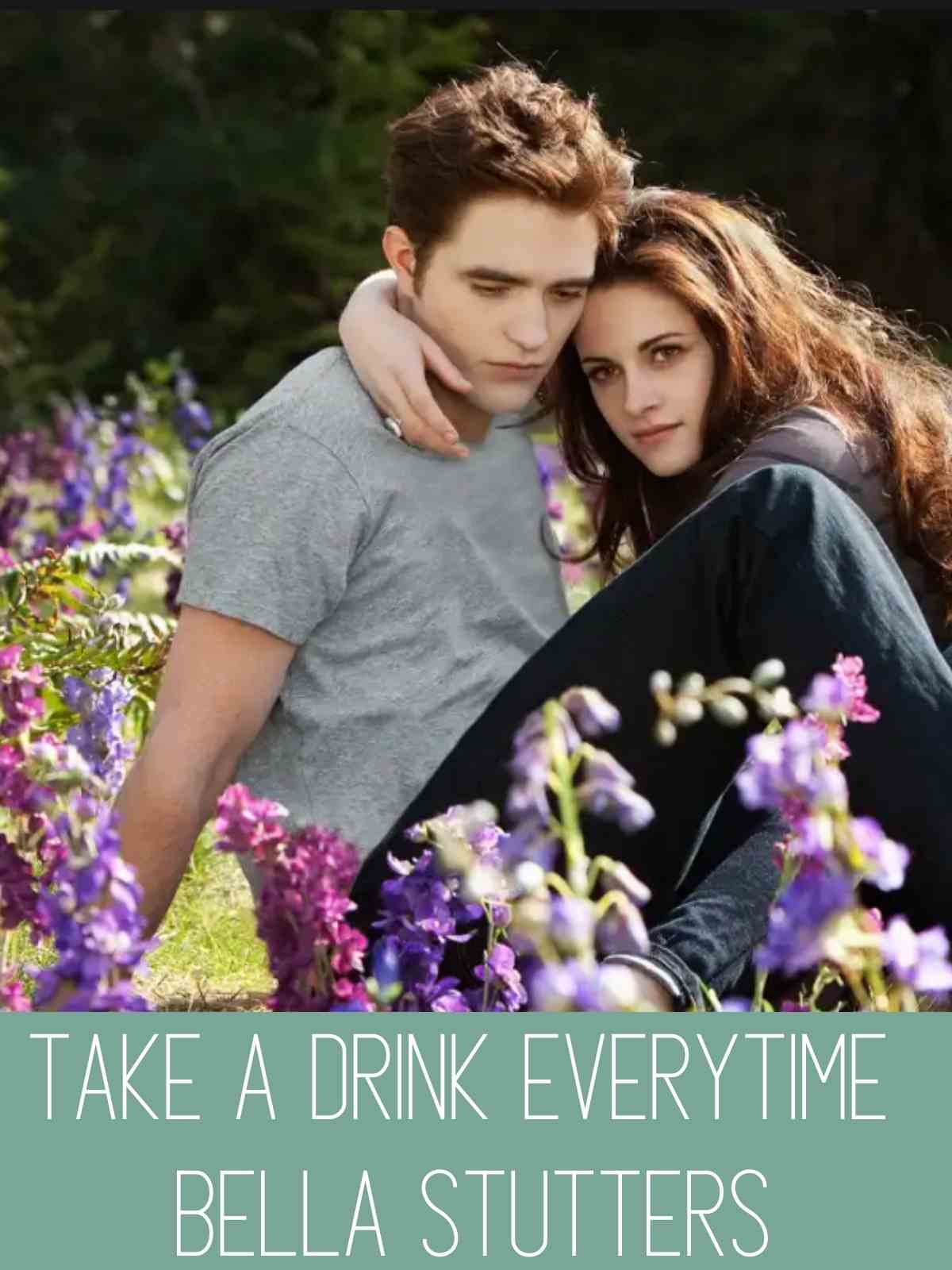 13. Drink when Edward is protective over Bella – A lot of the time, this kind of toxic display of masculinity is just not cute…but there is something about when it’s a vampire.

14. Take a shot when Edward tells Bella that he is a Vampire for the first time – It is one of the biggest moments in the movie.

15. Drink when Edward says ‘You better hold on tight, spider monkey’ – Oh to all that is good out there, why was this included? It’s cringe central. Speaking of cringe…

16. Drink every time you feel a cringy moment happening – DANGER. This one may lead to you not being able to finish the movie.

17. Take a shot when we find out that Jacob is a Werewolf – You kind of have to. Who would have seen this coming?

18. Take a drink when Jacob is jealous of Bella and Edward – Oof, another bad one.

19. Take a drink when Bella hurts her ankle. – Scary moments can be made better with alcohol.

20. Take a drink every time someone says Vampire – Had to do it.

So…are you ready to start playing the twilight drinking game? Make it even more fun by hosting a fun viewing party. The more friends you have, the more laughs will follow.

These nostalgic movies can be such a fun jumping-off place for adults to reimagine them with their new, older eyes.

There are so many other awesome fun drinking games you can play. The fun doesn’t stops once you become an adult. It just gets more… PG 21.

So if you are interested in adding some other fun drinking games into your life, then we have you covered. Growing up isn’t about getting boring, it’s about finding new and better ways to have fun. So get to it.