Inside: Minute to Win It Thanksgiving Games.

One of my favorite Thanksgiving traditions is spending quality time with the family and playing a load of fun games. We love board games, outdoor games, and most of all Minute to Win it Games. They are so much fun for everyone in the family, from the littlest of family members to the oldest.

Check out this totally festive thanksgiving themed Minute to Win It Thanksgiving games. 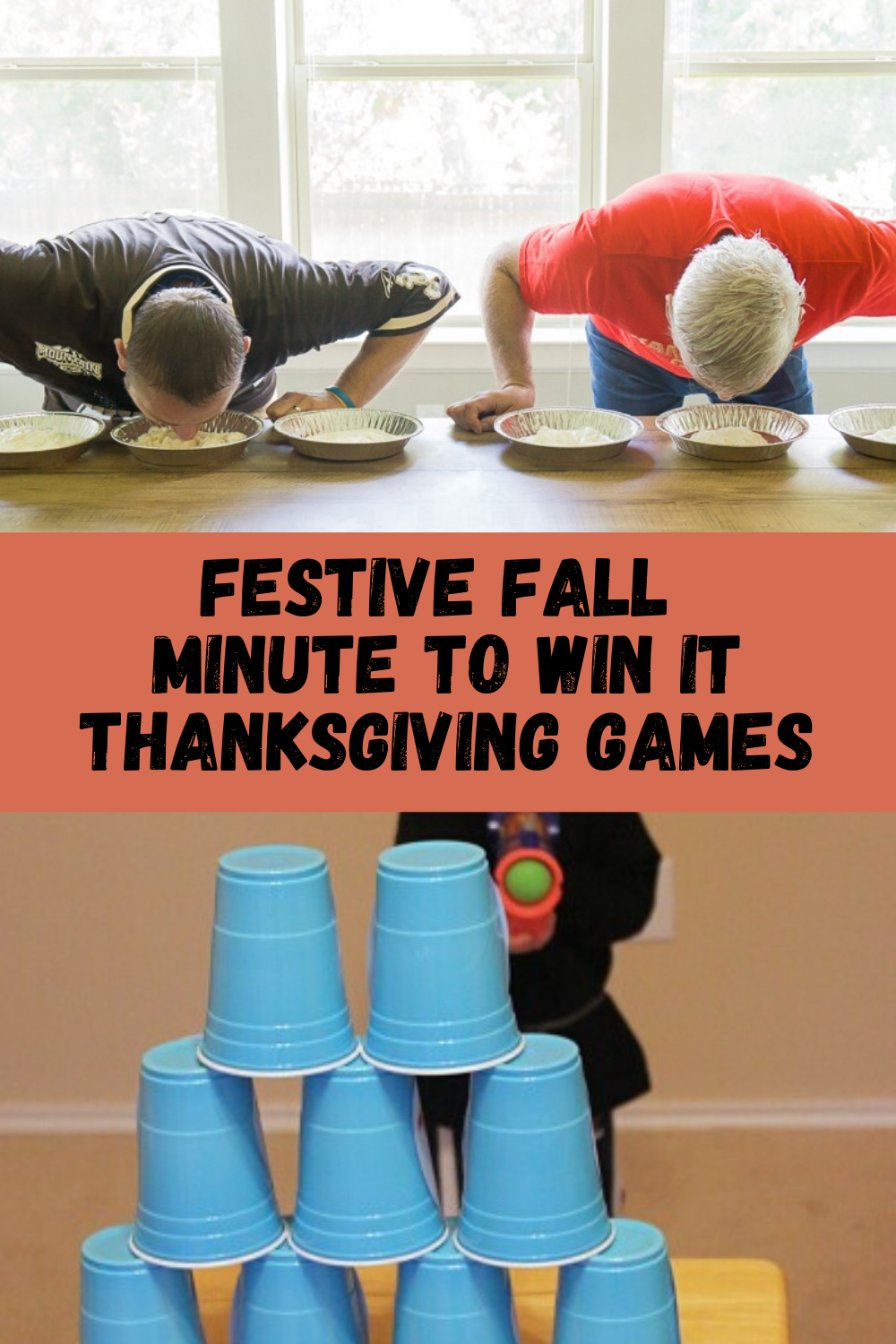 Turkey Baster Relay: Set up a start and finish line and race to beat the clock! Points can be awarded to players who successfully complete the challenge or race head-to-head and award points to the winner of each race.

Stuff the Turkey: Toss the “stuffing” into the turkey to score points. Set the timer for one minute and award points to the people who successfully toss 5 pieces of stuffing into the turkey. For group challenges, points can be awarded to people who complete the task and/or to the person who gets the most stuffing inside the turkey. 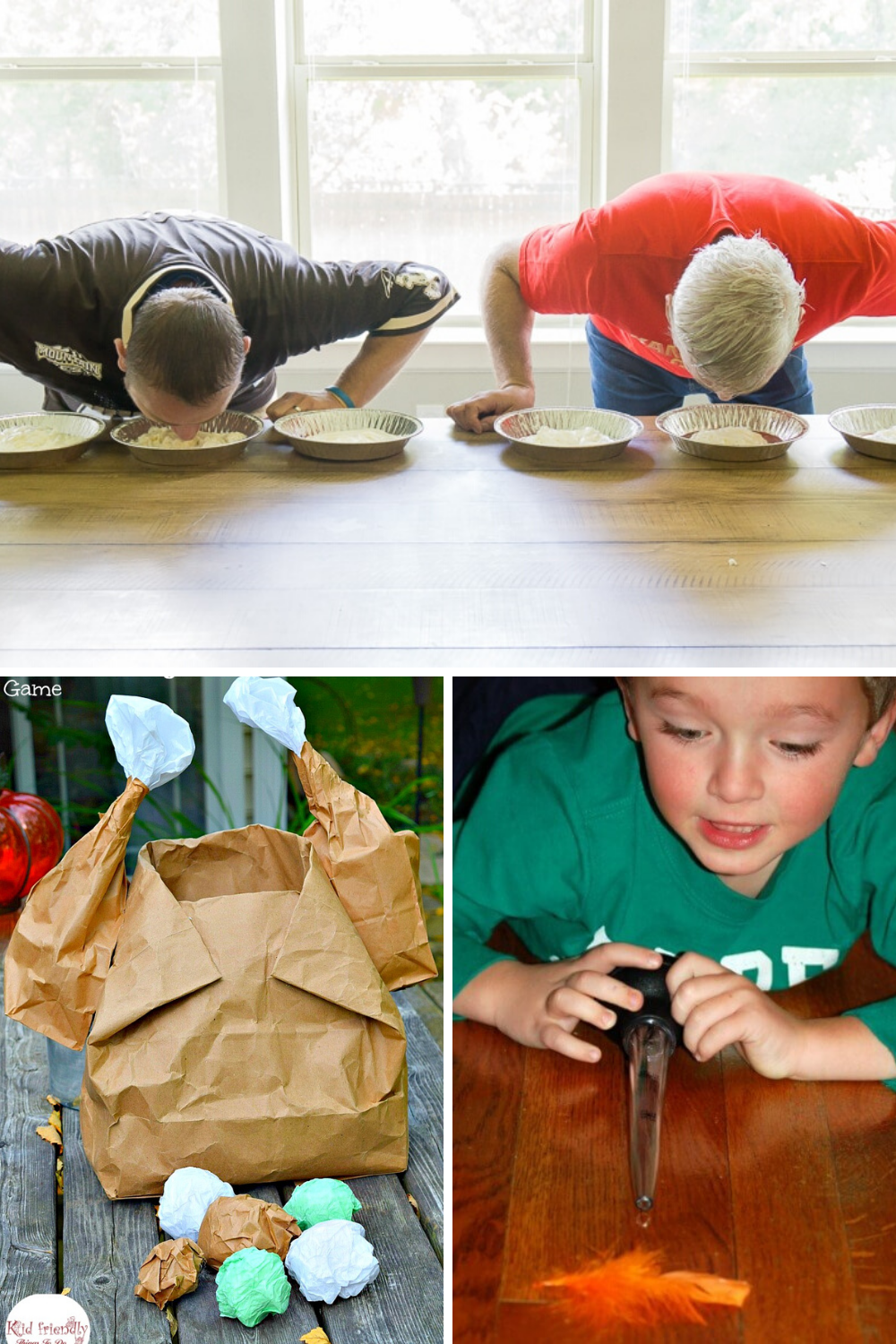 Turkey Bowling: Adjust the number of turkey cups used depending on the age and skill level of your guests. For an extra challenge, use a mini pumpkin instead of a ball!

To play, players must transfer three ping pong balls from the table to their goblet on the opposite side of the room. The catch? They can only touch (and hold) the ping pong ball between their chin and their neck. 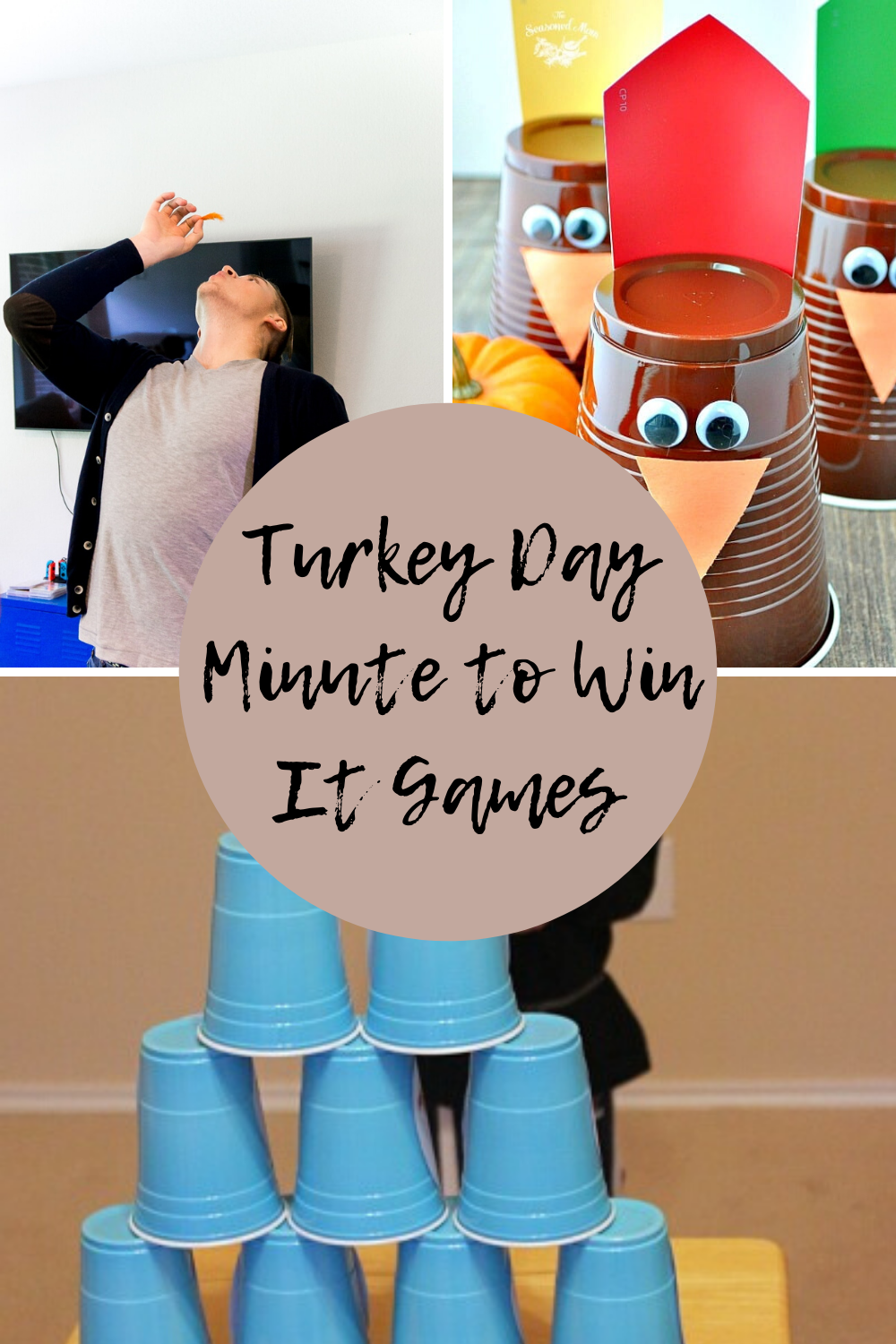 Flying Turkey Game: Put those Nerf darts to use again for this fun Flying Turkeys game! Players must knock all of the cups completely off of the table in one minute to score points!

Thanksgiving Minute to Win It Games

Turkey Feather Roll: Try to roll all six numbers in under one minute! For an even harder challenge, give players only 30 seconds to complete the task!

Football Flick: Give each player these mini footballs and line up a bunch of buckets or baskets at varying lengths. Tape a number to each of the buckets – the furthest one should be 7 points, the middle should be 3 points, and the closest should be 1. Players have one minute to flick (like you’re playing paper football) footballs into the buckets, scoring as many points as possible in the minute. 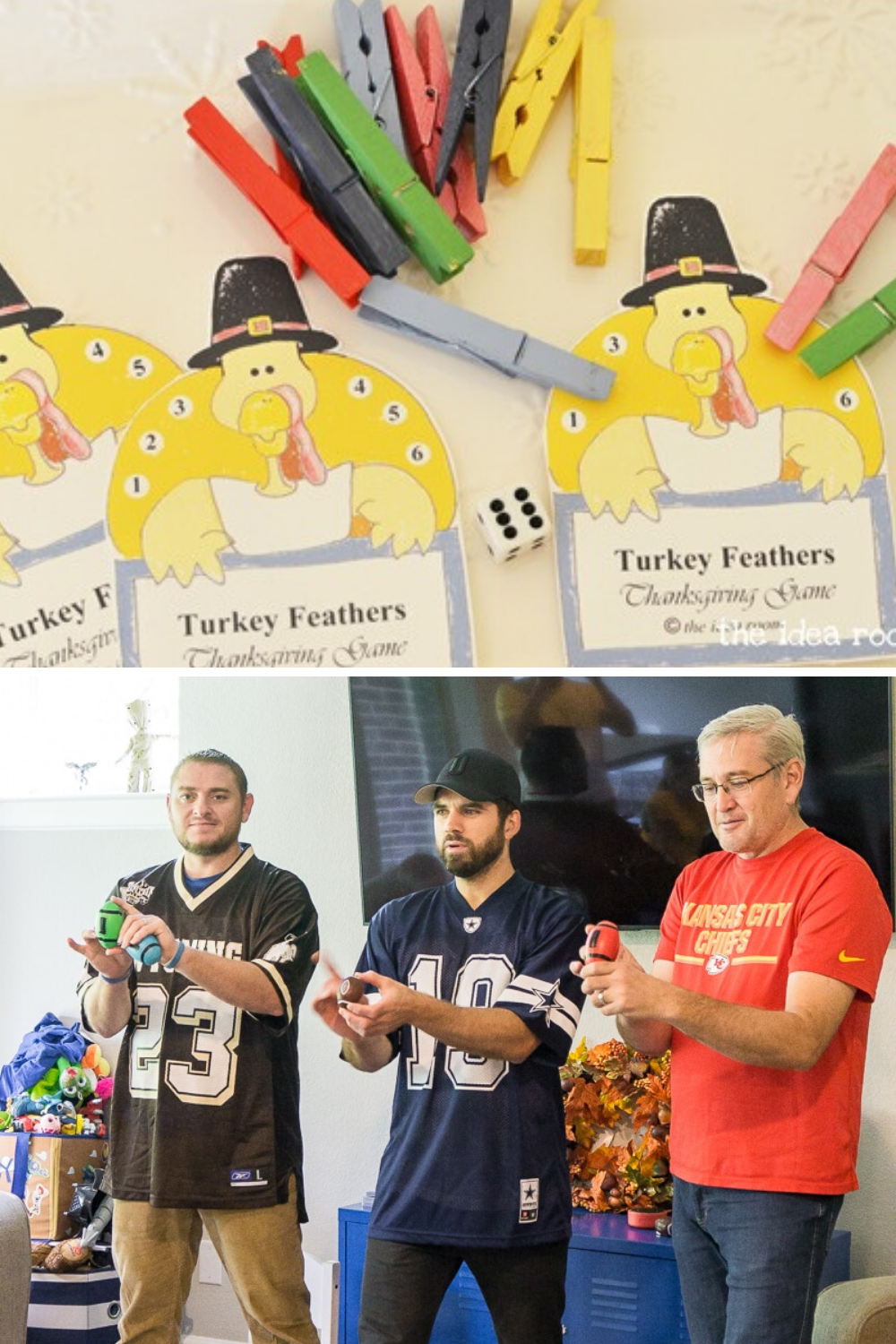 Candy Corn Stick Up: Using only one hand, balance as many candy corn on end as possible! For older children and adults, set a goal of 10-15 candy corns balanced in one minute and 5-10 for younger children.

Shake Your Tail Feather: This game is similar to junk in the trunk, but reimagined for Thanksgiving!

To play, give each player a box tied with pantyhose and have them tie the pantyhose around their waist so the tissue box is on their backside. Players must move around and shake until all of the feathers fall out of their tissue box.

These fun and hilarious thanksgiving games are exactly what you’re looking for this Thanksgiving. So while the turkey roasts, engage the whole family in these games.

If your family doesn’t mind getting a little messy to win a prize, Face the Pie is a great game to engage in. All you need is some pit tins, some gummy letters, and a lot of whipped cream.

Before the party, pull out gummy letters that spell P-I-E for each letter.

Decide on a Thanksgiving-related word and collect enough gummy letters to spell it at least 4 to 5 times, depending on the number of players you have. Then place these letters individually in different pie tins and cover them up with whipped cream.

Put one letter of each of those words into an empty aluminum pie tin.

Fill each of those pin tins with spray whipped cream and put in the refrigerator so they don’t melt while you’re waiting to play.

The players have to eat through the pies to find the letter.

The first one to find the complete word wins.

Remember to keep some winning prizes for the winners to give everyone an incentive to participate and give their best.