Inside: 11 Splashing Minute to Win It Swimming Pool Games.

Summer is coming quickly and boy I can’t wait! Hot sunny days, cold drinks, and if you’re lucky refreshing dips into a crisp pool. There is nothing better than a long day at the pool.

I love the sun-kissed cheeks and raft lounging, but my kids LOVE the endless pool splashing games. We have one summer birthday and one of my favorite ways to celebrate is a big pool party with all her best friends! These minute to win it swimming pool games are PERFECT for a little summer fun.

Looking for the cutest balloons for your pool party games? We have smiley face ones the whole family will love.

Balloon Toss: Everyone loves a good old-fashioned balloon toss. Add a swimming pool and some beach towels and you have a whole new twist to the classic game. Each team consists of 4 players divided into two pairs. Both pairs receive a beach towel to use as a launcher. The object of the game is to send the water balloon back and forth between your teammates using only the towel to catch and throw the balloon. Since exploding water balloons are near inevitable, the team who has the most back and forth tosses without a balloon breaking in 60 seconds wins!

Croc Wrestling: This game borrows most of its rules from the classic Chicken Fight with one special twist. Instead of sitting on a team member’s shoulders, players sit on top of an inflatable crocodile. The goal of the game is to knock the opposing player off of their crocodile. 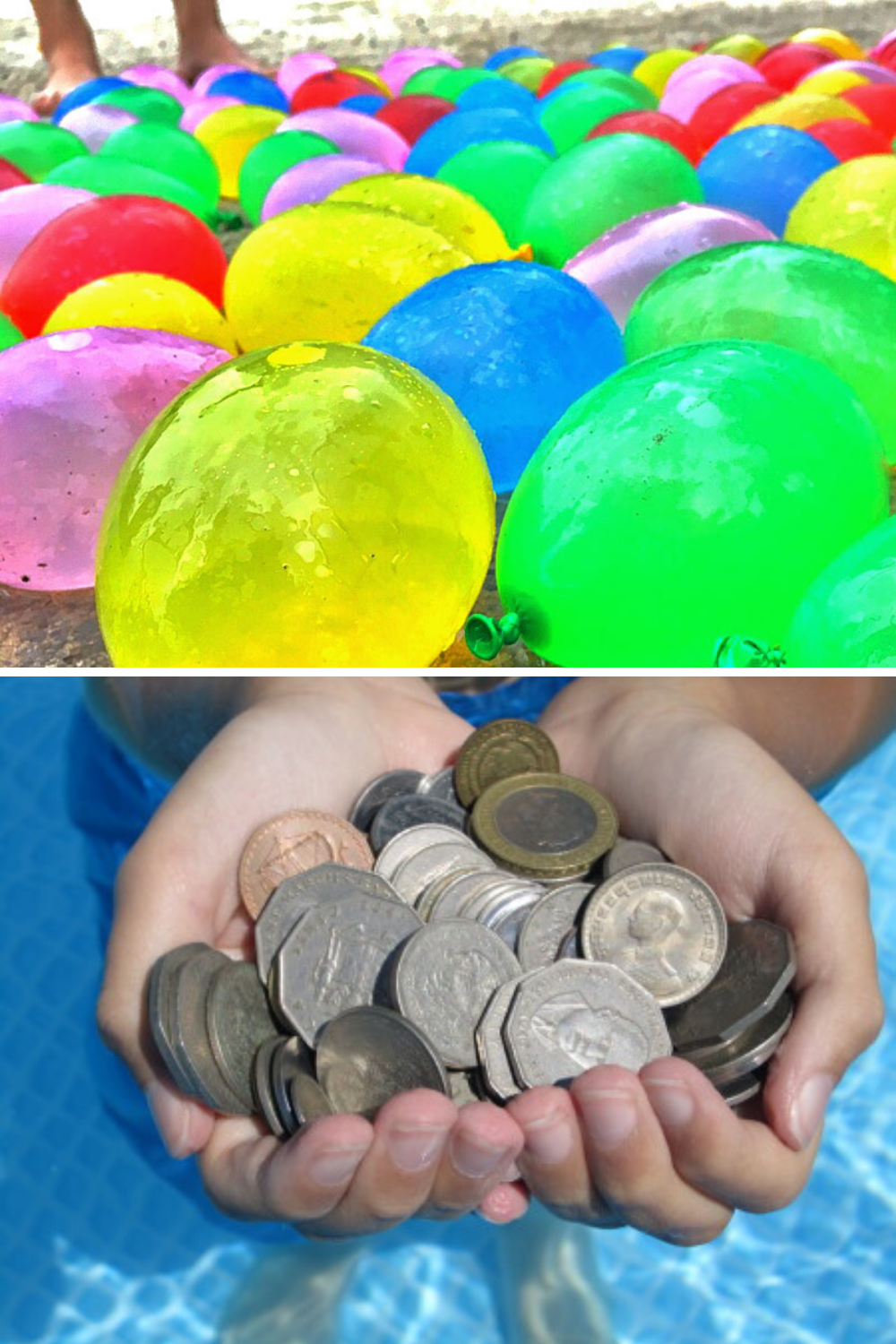 Balloon Boat Race: The Balloon Boat Race pool game can be played in a one-on-one or team style. Players line their balloon boats at the edge of the pool. On “Go”, players launch their balloon boats by releasing the balloon. For team play, players launch their boats once the previous team member’s boat stops or makes it to the other side of the pool. The team whose boats go the farthest in 60 seconds or make it to the opposite edge of the pool first, wins.

Minute to Win It Games

Dolphin Race: This game can be played in a one-on-one or relay race style depending on the number of players. Each team receives a beach ball — players transport the ball across the pool using only their noses. Players using their hands must return to the starting line. First one to the other side in 60 seconds wins!

Bumper Balls: First designate a small area in the pool as “the arena”. Section off the arena using the rope. Players then enter the arena, each holding a beach ball. The object of the game is to bump other players into the rope using only the beach ball. If a player touches the rope they must sit out until the end of the round. The last player standing wins the round. Play for fun or go for a full tournament. 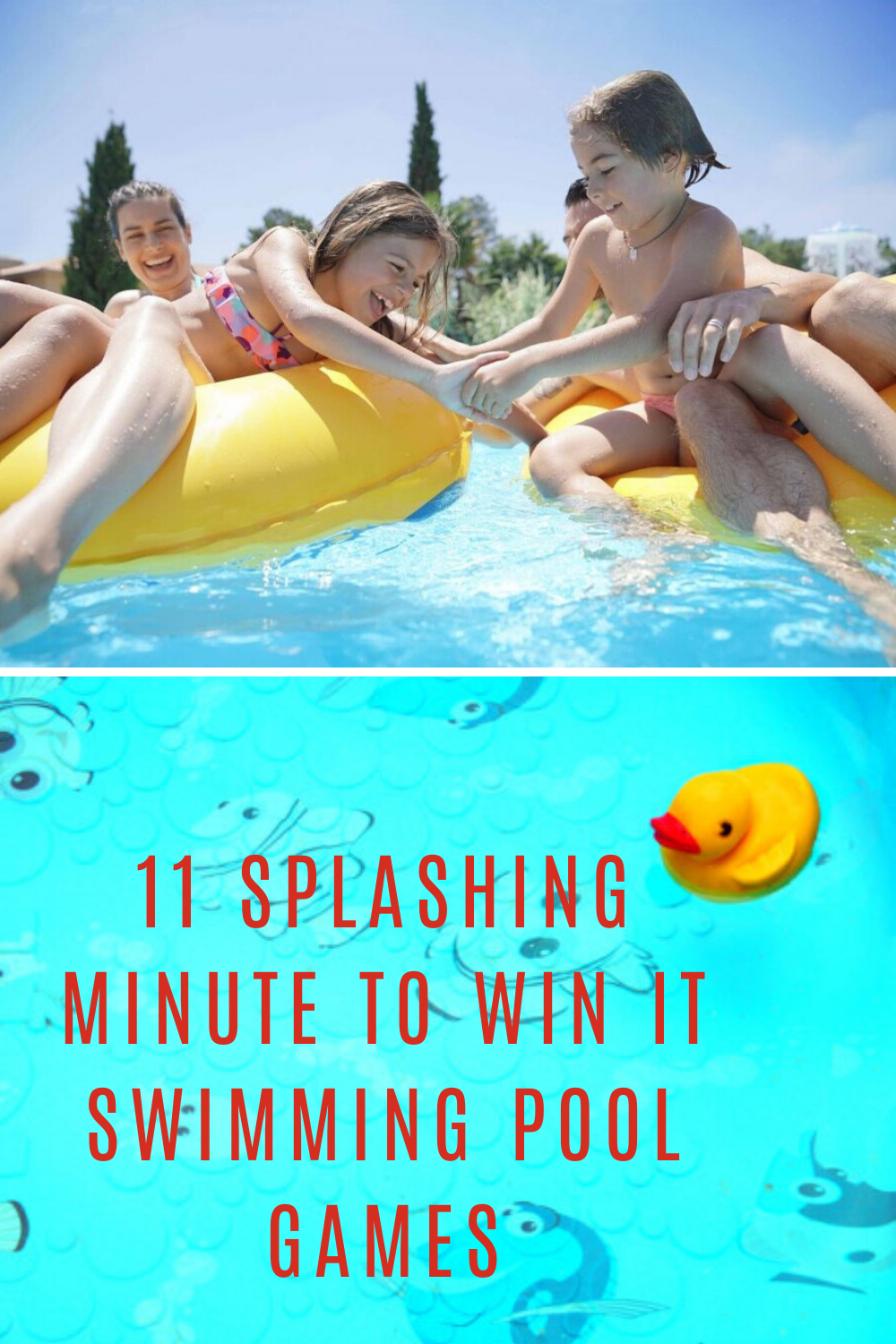 Duck Push: The goal is to get the rubber duck across the pool, except players can only use their nose or breaths of air to push the duck forward. Players cannot touch or hold onto the duck in any other way. Players can divert opponent’s ducks off course by splashing water (at the player or duck), but cannot touch them. The player who gets the furthest or across the poll in one minute first, wins!

Floatie Race: Players line up with their floaties at one of the pool. Any floatie can be used as long as it’s big enough to sit on and keep the rider afloat. On “go”, players race to the opposite end of the pool, whoever gets the furthest in 60 seconds wins! 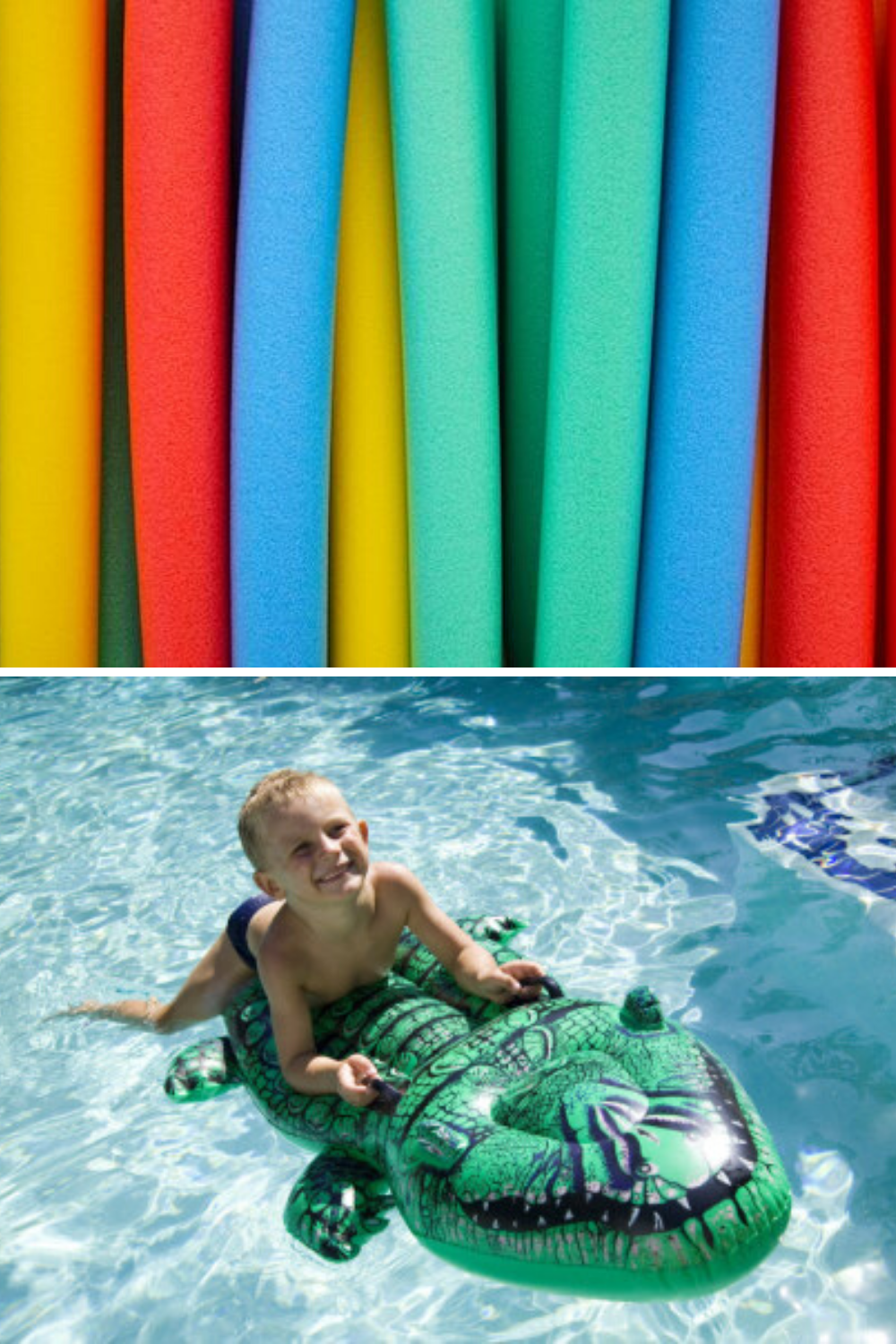 Invisible Bottle: This pool game takes the “needle in a haystack” concept to a whole new level. Players line up with their backs facing the pool — meanwhile, a helper fills a water bottle to the very top with water, screws on the cap, and tosses it into the pool. On a count of three, players turn around and jump into the pool to find the water bottle.

Ping-Pong Scramble: Mark each set of 10 ping pong balls with a specific color dot, then scatter the balls across the pool surface. Players divide into even teams and line up along the edge of the pool. Each team is assigned both a color and a basket. On “go”, players jump into the water to retrieve the ping pong balls that correspond to their color. The team who gathers the most of their ping pong in 60 seconds, wins!