Inside: Out of the Box Card Games for Teens.

Who doesn’t love a good card game? They are personally my favorites! We play games like skip-bo, phase 10, and even some classic poker ALOT in my house.

But card games don’t have to be played with just a simple deck of cards, although they are still fun these unique card games for teens are full of new and crazy ideas.

Don’t worry though, we splashed a couple of classics in for extra fun. 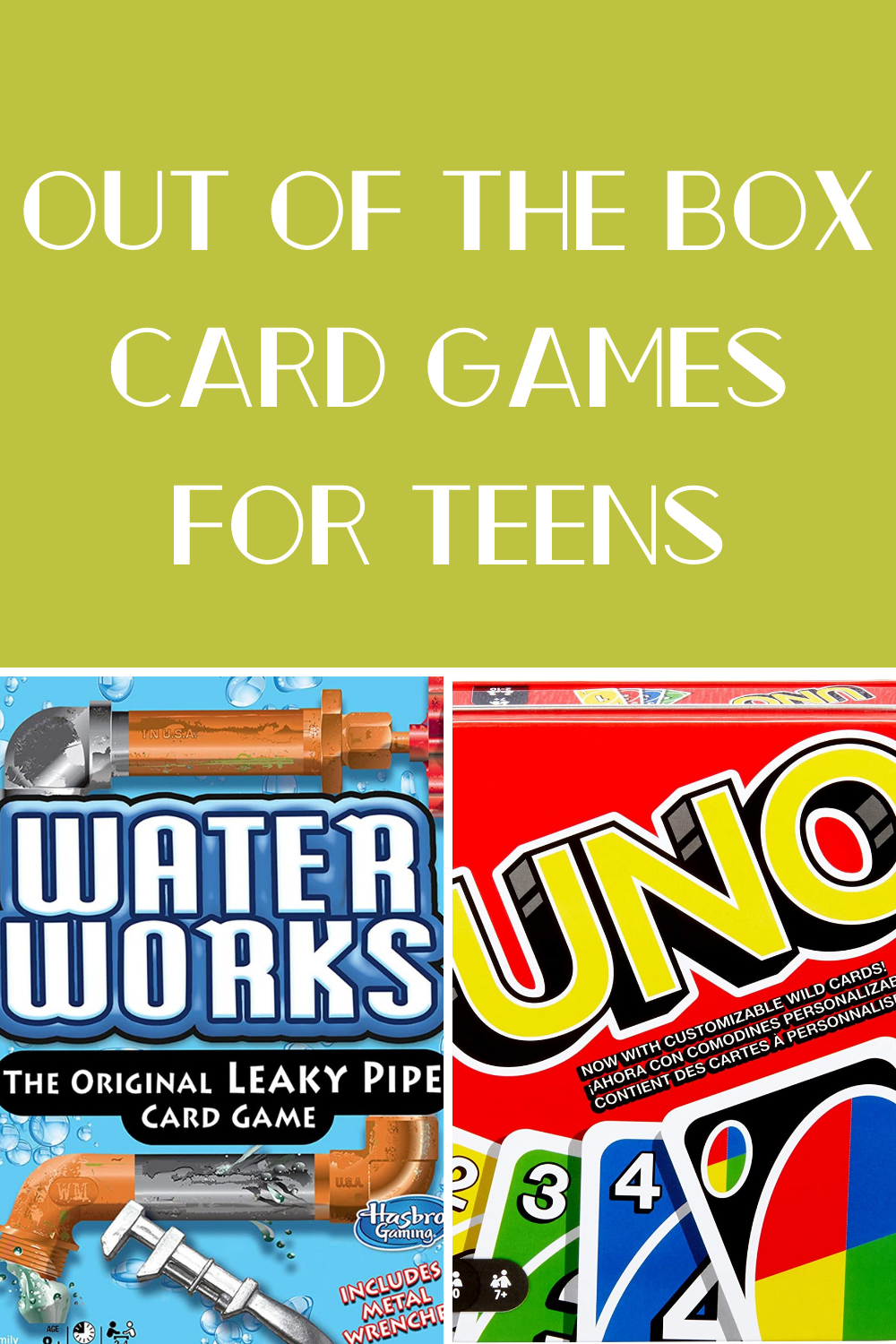 Skip-bo: The objective of the game is to get rid of all the cards in your stockpile. Each player gets thirty cards and the card at the top of your pile is face up. There are four building piles at the center of the table that start at one and pile up in ascending order to twelve. A Skip-Bo card can be played like a wild card and can be put down in place for any number. When a building pile reaches twelve, the pile is reshuffled and put back into the center stockpile.

Uno: I’m not sure there are many people who haven’t played UNO but if you haven’t, players earn points by matching colors and numbers in order to get rid of all of the cards in their hand first. Uno is one of our favorites. 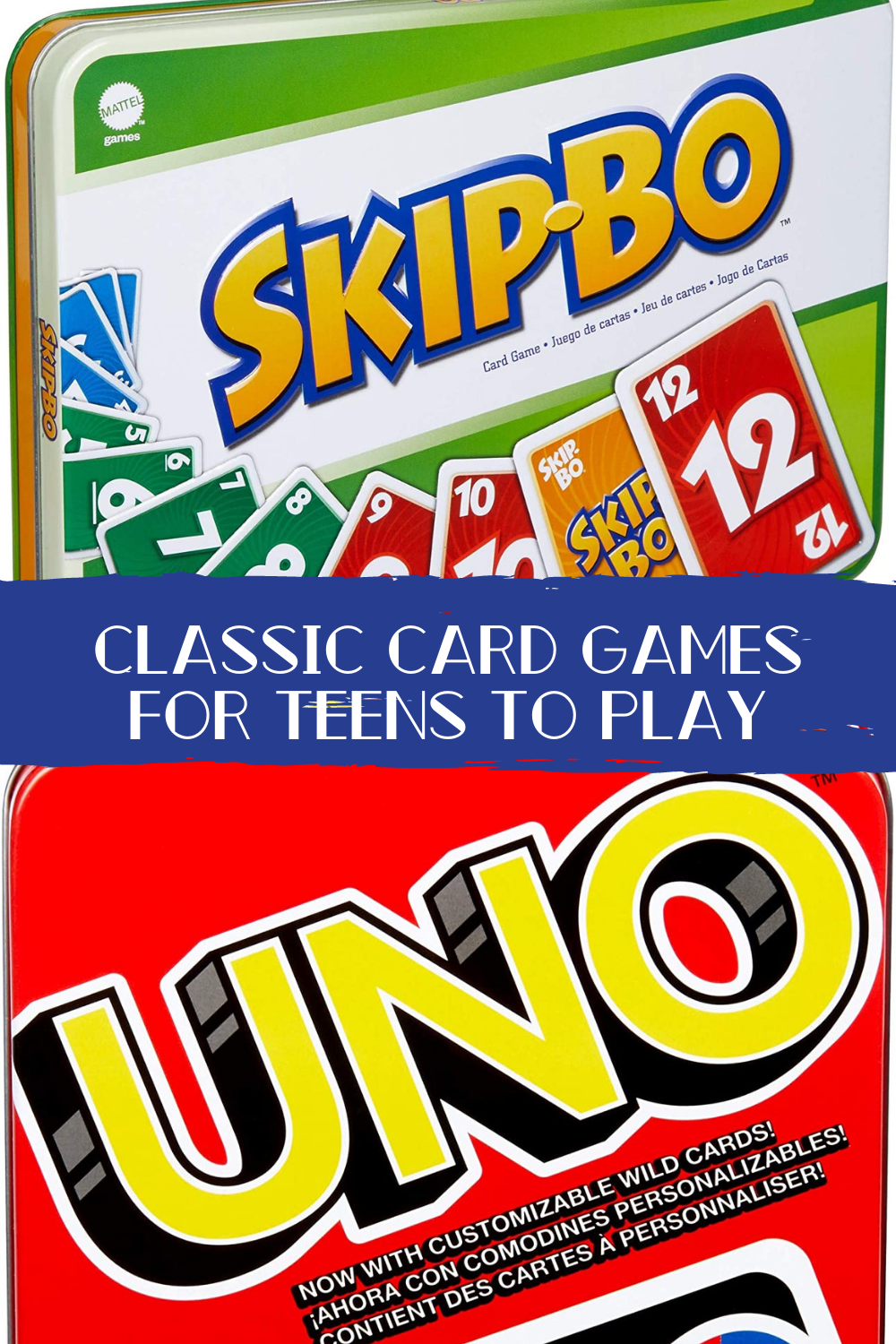 Pay or Play: Each player starts by putting one chip (or jelly bean) into the pot before each deal. Deal the cards, if some players receive fewer cards than others, it is customary for each player to add one additional chip.

The turn to play continues clockwise. If a person is unable to play in turn, he or she puts one chip in the pot. Whoever plays the thirteenth card of a suit may choose any card from his hand to begin the next series.

These card games for teens are full of crazy fun that will keep them laughing for hours.

Exploding Kittens: What do kittens, magical enchiladas, and weaponized back hair all have in common? They are all part of this very cool card game, Exploding Kittens. This card game is a favorite in our house and often gets played when friends come around for a play. The rules are simple, the players pick a card until someone picks up the exploding kitten. This can then go two ways. You either die a very swift death and get eliminated or you’ve picked up a useful card along the way that you can use. The diffuser card allows you to be able to deactivate the exploding cat by laser pointing and belly rubs.

Bears vs. Babies: Bears V’s Babies is brought to you by the clever people behind Exploding Kittens. This card game is just as zany and fun. Your aim is to build amazing monsters who then go to war with horrifying babies. The deck of cards has a mixture of monster parts and baby cards. The aim is to draw as many monster parts as you can so that you can build your beautiful monster. If you draw a baby card from the deck, its placed in the center of the table. When the babies get angry enough, they will attack! You better hope that you have built a pretty good monster to defeat the army of these horrible babies! 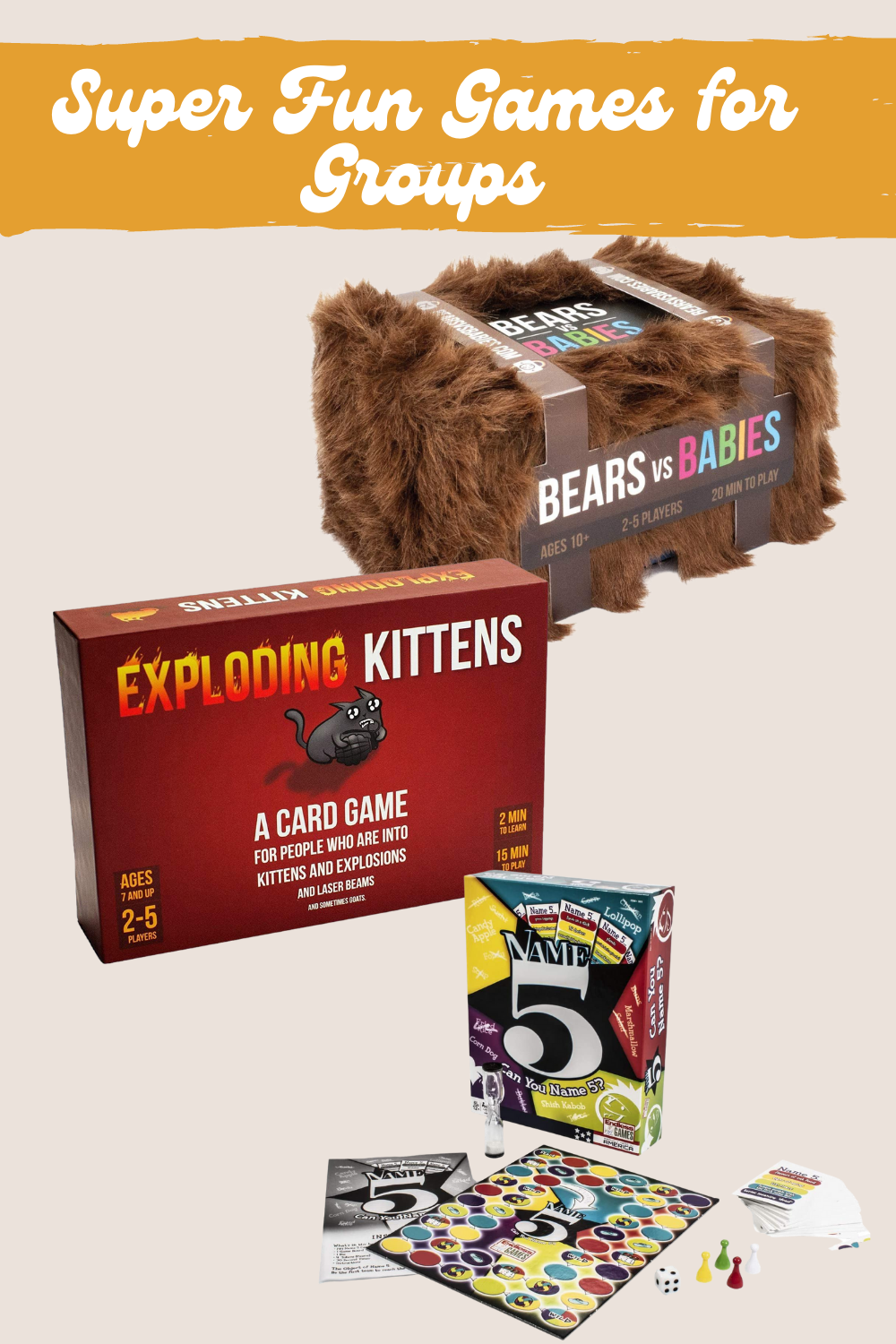 Name 5 Game: Name 5 Game will be a family favorite. Can you name 5 things that can make you sneeze? How about 5 vegetables that begin with the letter a? Believe me, it’s not as easy as you think it is. You need to come up with 5 answers to various topics before the time runs out.

Out of the Box Fun Card Games for Teens to Play

Classic Waterworks: This game can be played by anyone but honestly, it’s so much fun that you’re going to want to play it yourself. Basically, you are matching your cards to create a series of pipes that are leak-free. It’s fun and challenging.

Unstable Unicorns: The front of the box sums up the game. “Build a Unicorn Army. Betray your friends. Unicorns are your friends now.” Don’t be fooled though by how simple this all sounds. Friendships will be tested in this card game all about destruction and unicorns. You start the game with your own baby unicorn. Your mission is to grow your Unicorn Army as quickly as you can. There are over 20 magical unicorns to collect as well! Your job, other than protecting your stable of unicorns, is to seek revenge by using your Magic. Be aware when another player pulls out the Neigh card as it will send the game into utter chaos! Play this wonderful card game to see if you are The Righteous Ruler.

Moose Master: Moose Master is the perfect card game for teens who are into games that keep you laughing while trying to outsmart your friends. It sets up in seconds and easy to learn. This party game is the ultimate ice breaker for get-togethers and makes a great gift for the holidays.