The higher the stakes the bigger the reward, am I right? Throw the perfect Casino themed party and have a gambling blast! First start off with some amazing invitations focused on a casino theme. Cool casino themed decorations and accessories will add to the theme of the casino party.

If you are going to a casino themed party the expectation is there that you will be a winner. 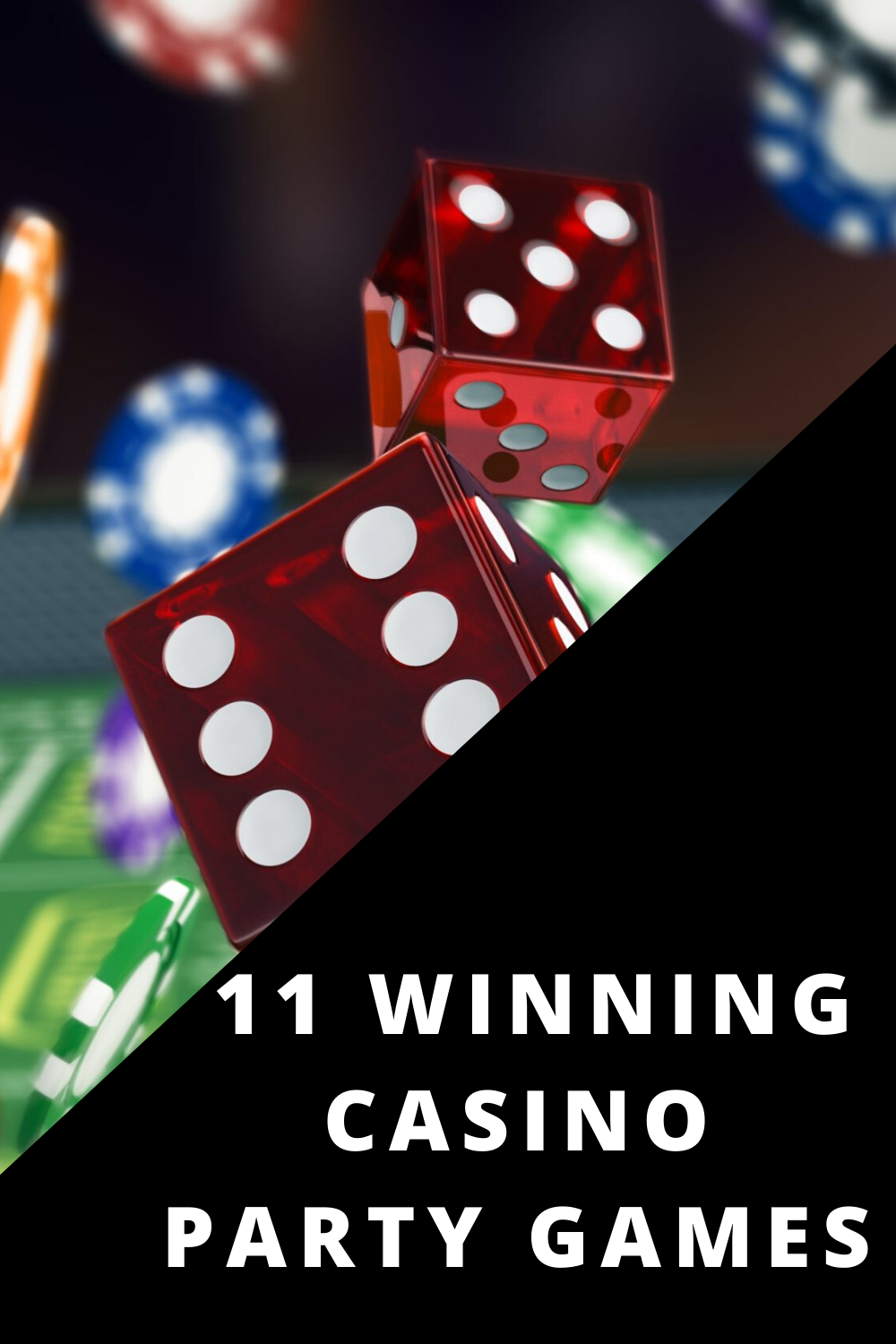 Before the games start, announce that prizes will be awarded to those who have the highest chip count or funny money. At the end of the evening, everyone goes to the prize table with their winnings and choose their big prize.

Here are a few of our favorite casino party games for your next party with some pretty crazy twists to some of them.

Blackjack: Is a counting game. The idea is to accumulate cards with a total value as close as possible to twenty-one without going over.

A player wins if his hand is closer to twenty-one than the dealer’s hand, or if the dealer goes over 21, which is called busting.

Players can take as many cards as they wish from the dealer until they stand (stop taking cards) or bust (the hand goes over twenty-one). This is a good casino game idea and it is said that this is one of the best gambling games to play where you have a better chance of winning if you play by the rules.

Roulette: This is a casino game in which a ball is rolled onto a spinning horizontal wheel divided into compartments, with players betting on which compartment the ball will come to rest in.

It’s hard to say when exactly the roulette game was invented but there are a few theories all connecting with Monks. Some researchers think that roulette was invented by random monks who got bored with the monotonous life in a monastery and decided to bring some fun into their lives.

Texas Hold’em: This is the most popular form of poker surging to popularity in the 2000’s due to the exposure on T.V. and the internet.

Texas Hold Em is an ideal gambling game for a home party. 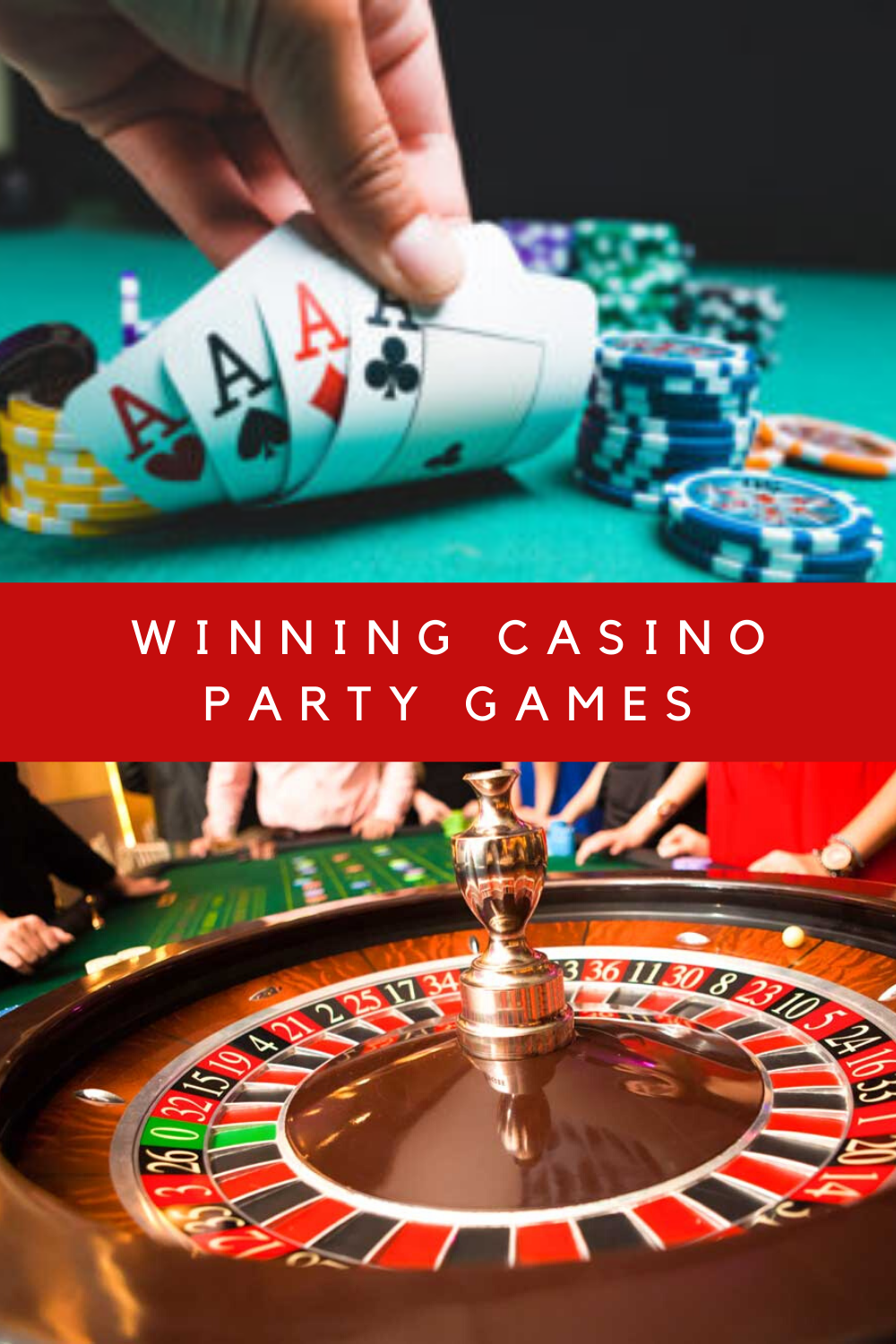 Poker: The most classic poker gambling party game is five-card draw. To set the mood have your guests wear dark glasses and baseball caps just like on TV.

Each player is dealt five cards. Players then place their first bet. Cards are then discarded and replaced by the dealer to improve the hand. The second bet is placed and everyone reveals their hand. Winner takes the pot.

Chase the Ace: This is a fun card game for a casino themed party. It will create a lot of laughs and will have everyone sitting on the edge of their chairs.

The premise is simple, players are dealt one card only, and the idea is to not end up with the lowest value at the end of a round’s trading. You can stick if you have a high card, or trade with the person sitting to your left.

The game continues until the last person, who by now presumably has an A or another low-value card. At this point they can stick with what they have, or pick the top card of the deck.

If they reveal an A they gain immunity, and any other value card becomes theirs for the round. Every player reveals their card and the lowest number is the loser.

Shot Roulette: It’s an oldie, but a goodie. And for adults only.

Based on the classic roulette wheel, a shot is linked to each number on the board. The player spins the wheel, and whichever number the ball lands in they have to drink the associated shot.

It’s a fun game because everybody starts to get suitably merry after a few rounds, and there’s that sense of jeopardy when a variety of drinks are used – especially ones that nobody wants to drink, e.g. tequila on the zero or chili vodka on number 13.

Shot roulette is an easy game for party-starters to create, too. All you’ll need is a roulette wheel and ball (these are cheap enough to buy in ‘travel size’), and the numbered felt upon which players traditionally place their bets.

If you don’t want to ruin your game table, you can always draw a grid featuring 38 numbers. And get ready to redraw it, as there are likely to be spillages! 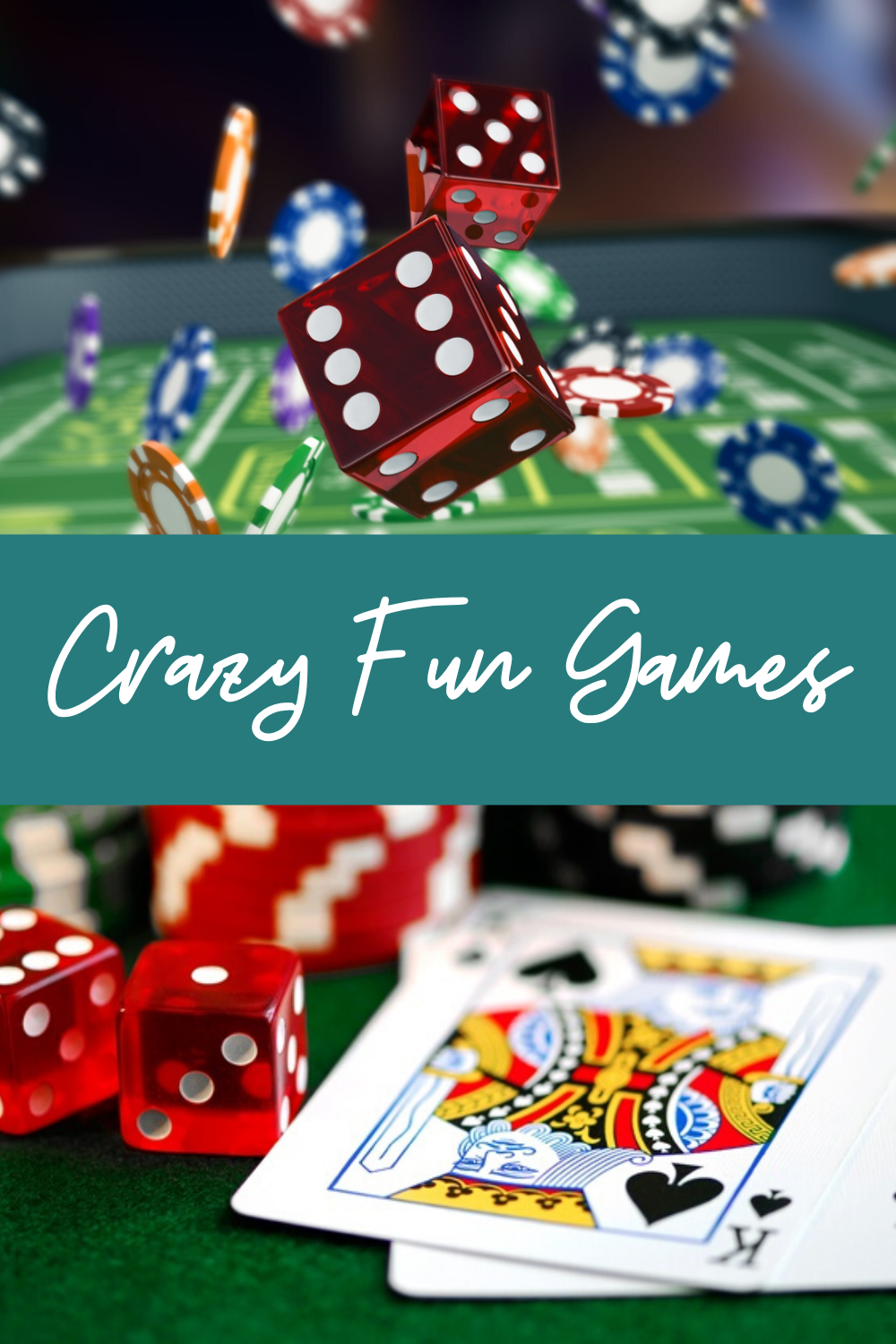 Chase the Ace: This is a fun card game that, whilst technically not played in a casino, still creates plenty of laughs and that edge-of-the-seat nervousness that really does make for the best party games.

The premise is simple, even if the name is something of a misnomer. Players are dealt one card only, and the idea is to not end up with the lowest value at the end of a round’s trading. You can stick if you have a high card, or trade with the person sitting to your left.

The game continues until the last person, who by now presumably has an A or another low-value card. At this point they can stick with what they have, or pick the top card of the deck. If they reveal an A they gain immunity, and any other value card becomes theirs for the round.

At this point, every player reveals their card and the lowest number is the loser. This individual could be forced to undertake a forfeit if you so wish, but all-in-all it’s a fun game for kids and adults alike.

Chilli Craps: Similar to Shot Roulette, a classic drinking game revolves around the roll of two dice, similar to a game of craps, with each combined score connected to a specific drink.

If you want to take things to the next level, there is a devilish way in which you can do just that…

Most gamers know that ‘snake eyes’, i.e. rolling a double one, is the worst throw in craps. So why not punish the player in the most spine-tingling way possible by making them take a bite of a raw chilli (obviously not a Naga or a Scotch Bonnet)?

It adds a fun fear factor, and it’s always nice to see your close friends in mild discomfort (or is that just me?). 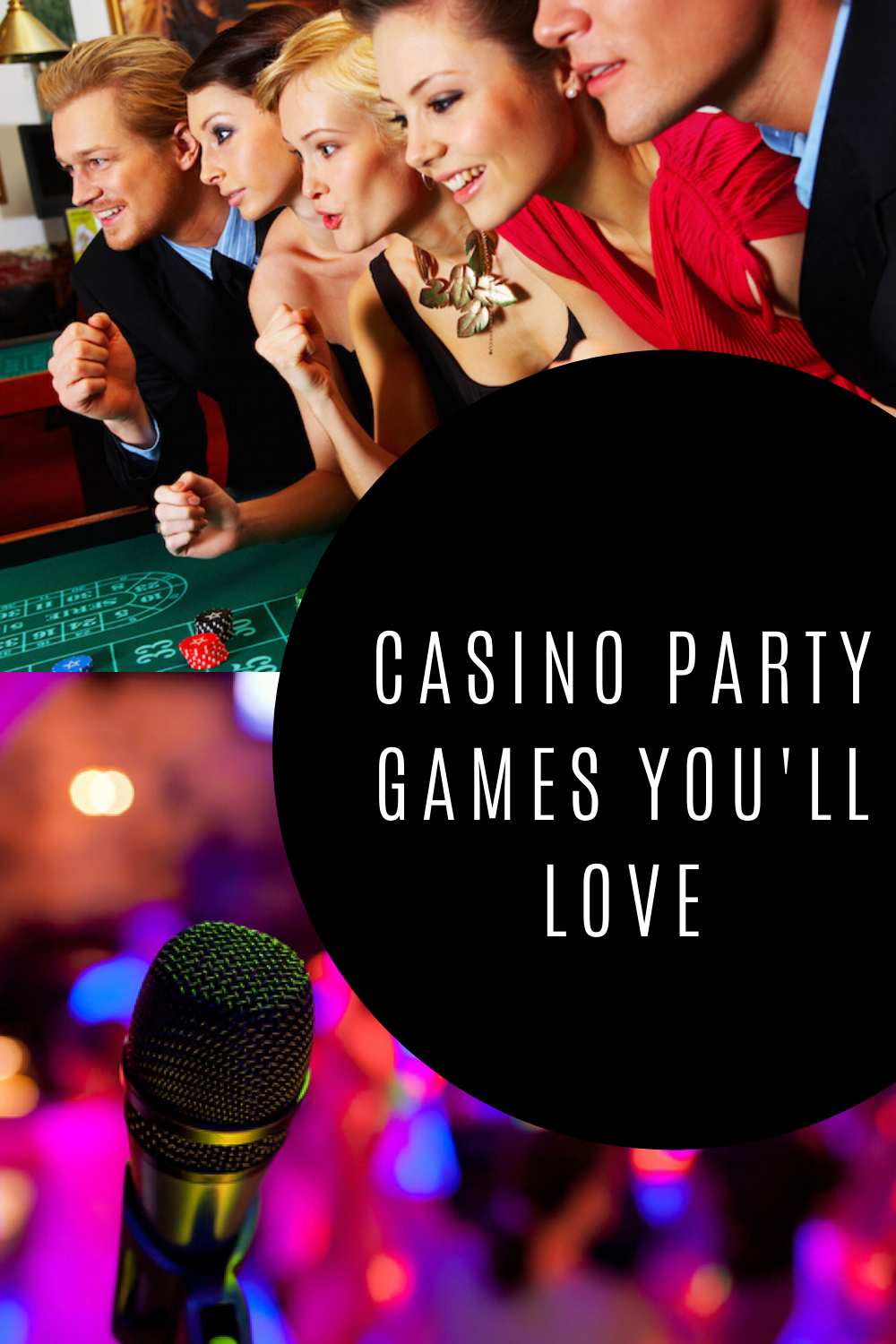 Karaoke Poker: Here’s a fun way to enliven lengthy games of poker. Assuming the notion that the majority of people are too shy to sing karaoke when completely sober, how about introducing a sing-song as an act of punishment to your game?

You can make somebody sing for all kinds of reasons: running out of chips is the most obvious reason, but also players on the right side of a bad bet can be made to serenade their opponents; perhaps Michael Jackson’s ‘Beat It’ would be an appropriate choice of tune?

Choco Blackjack: Most all of the above gambling-themed party games are oriented towards adults, of course, but there is a chance to introduce the kids to casino games in a fun way, too.

Blackjack is the perfect avenue. You can also reward them with chocolate poker chips that are readily available online. You can also pay out in chocolate and sweeties for successful spins of the roulette wheel and, for the older kids, winning Texas Hold’em hands.

Craps: This is an exciting casino themed dice game in which the players make wagers on the outcome of the roll! If you ever go to a casino just listen for the raucous excitement as players roll the dice. Players may wager money against each other or a bank playing “casino craps”, also known as “table craps”.